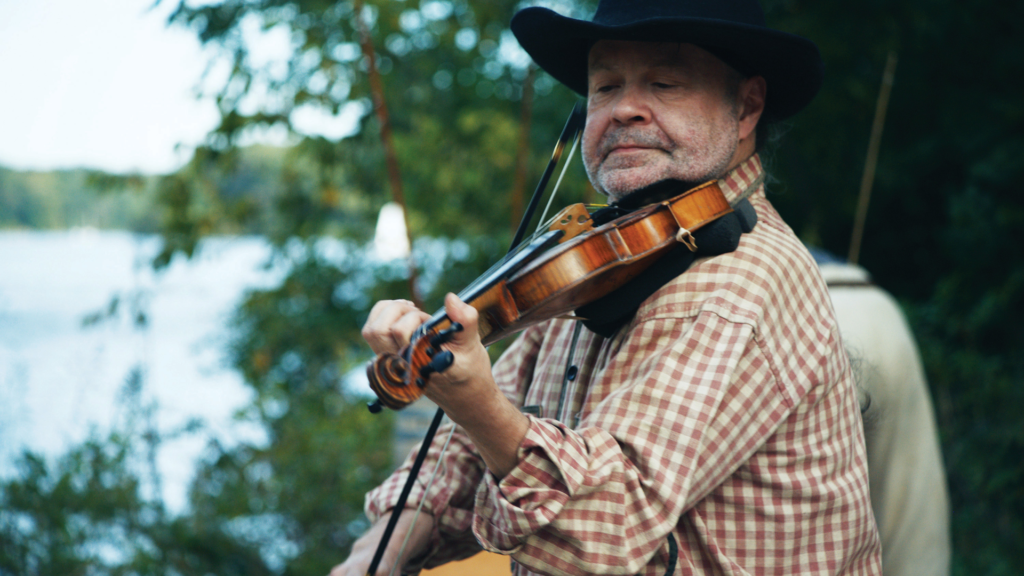 When violinist Dana Mengel and his brothers were teenagers, they would practice music together in Woodlawn Cemetery, off Noland Road, a few blocks from their home in Independence, MO. It was quiet (plus there were no critics), with a beautiful view all the way to Blue Springs, but Mengel always wondered about the stories of the people buried in the ground beneath his feet.

He still does, even though he’s now a full-grown adult who has lived his entire life in Independence. Starting sometime around 2014, Mengel’s affinity for the city’s history led him to start writing “The Oregon Trail Suite,” a composition for string orchestra and percussion that traces the journeys of families setting out across uncharted territories, facing uncertain challenges.

“[The Oregon Trail] is special to me because it brought the nation together at a time when it was divided,” Mengel says. “[It’s] an epic story, and I just want to embellish on the greatness of it.”

So, Mengel continues, “I laid down in a swale, in the wagon ruts up by the Bingham Mansion, and I just had this overwhelming pathological feeling that I was there and I could hear their [the pioneers’] voices. Not literal — it was more just a feeling. But I hear that stuff in my head when I go play at my keyboard.”

Though he spent 20 years making a living writing sacred choral music, Mengel has recently turned his attention back to instrumental compositions. Along with orchestra pieces (he’s currently on his fifth symphony), he’s written about 300 “prairie dances,” as he calls them: works for violin and cello that he plays with his brother Leslie in the Mengel Brothers Duo. (Most Sunday evenings, you can find the Mengel Brothers Duo at Chaz on the Plaza, performing original compositions as well as strings arrangements of pop, rock, and classical songs.)

Some of those “prairie dances” are inspired by the work of George Caleb Bingham, the famous Missourian celebrated for his portraiture and genre paintings depicting ordinary lives in the American frontier. The River Market-based film production company Wide Awake Films recently made a docu-drama about Bingham, An American Artist: The Life and Times of George Caleb Bingham, which has aired on PBS. Mengel has a cameo in the film (he plays a fiddler) and the duo recorded music for the soundtrack. (They’re in good company: the other music in the film was performed by Yo-Yo Ma.) “Bingham really captures humanity,” Mengel says, “He was just so close to nature.”

On the third weekend of May, Independence will host a three-day celebration called “Party Like It’s 1843,” to commemorate the 175th anniversary of the Great Migration of 1843, when roughly 1,000 pioneers left Independence for Oregon. Among the festivities: a chamber ensemble performing selections from “The Oregon Trails Suite” for the first time. The musicians will be dressed in period garb, and a multimedia component will add historical images, quotes, and context.

Mengel’s suite is tuneful and soulful, but, rather than recreating the folk music of the era, he channels the influences of Antonín Dvořák, Béla Bartók, and Jean Sibelius into the music. It traverses the physical and emotional journey of the trail, from Wayne City Landing all the way to Oregon City, with the movement of the wagons, the river crossings, the excitement, fear, lonesomeness, joy, and relief.

“I’m describing thunder and lightning and crossing the depths of these rivers, so the music is dynamic and in-your-face — it’s scary,” Mengel says. “But then there’s a lot of music that’s romantic, like Dvořák — lots of rich, soulful, pining music, longing for a better life.”

Mengel says he hopes those contrasts will add up to something more nuanced and evocative for listeners — maybe something closer to the voices he heard lying on the ground outside the Bingham Mansion.

“It makes you have compassion for these people,” he says, “rather than just the history.”

“Sounds from the Oregon Trail.” Sunday, May 20, at 2 p.m., at the National Frontier Trails Museum (318 West Pacific Avenue, Independence).