Damien Sneed on ‘We Shall Overcome,’ his musical tribute to MLK, ahead of Sunday’s Carlsen Center performance 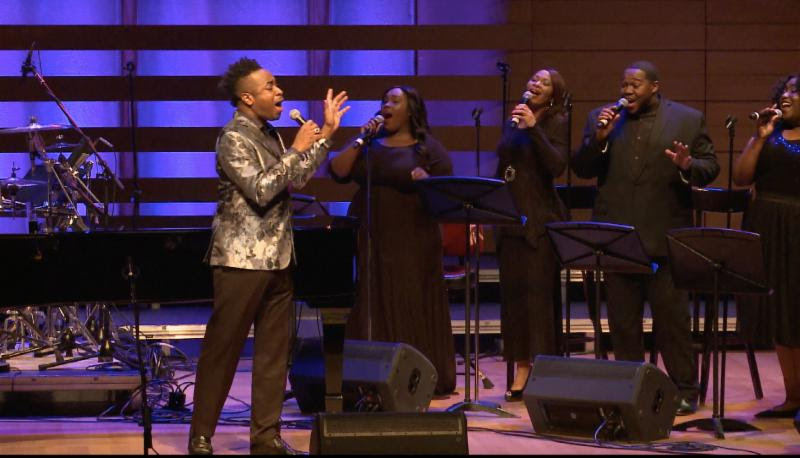 This year marks the 35th anniversary of Martin Luther King, Jr. Day. Musician Damien Sneed’s latest album is titled We Shall Overcome, and it features music inspired by Dr. King, as well as songs from the era in which he marched, fought, and spoke. It’s a powerful release, combining jazz, gospel, and soul, and Sneed is taking the show on the road all the way through Black History Month and into the early part of Women’s History Month. The outing is going so well that, when Sneed and I spoke just a couple of weeks into the tour, he’d already booked a set of 2020 dates. We talked about all of this and more by phone.

The Pitch: The thing that  interested me about the tour and the album is the mix of the praise and secular music — much like how Dr. King was a religious and public figure himself. How do you balance that mix?

Damien Sneed: It’s also just the music of African-American homes of that time. There was also a lot of expression, artistically, through visual art, as with music. There were a lot of people creating music to express themselves and to give voice to those who did not have a voice. There were people like Countee Cullen before King, James Baldwin, Langston Hughes, Zora Neale Hurtson — people who were writing, as well. It was just the mode of that time period.

I grew up in a family that listened to all kinds of music, so it was definitely the American experience. The praise music or the gospel music was just a part of the culture. Protest songs were also there, like Marvin Gaye’s “What’s Going On” on Motown Records. Also, I had an opportunity to travel a lot with Aretha Franklin, and every night in our set, traveling during the last years of her life, we would include all styles: from “On Broadway” to classical to R&B to American pop, gospel music. All those styles were included. So, for me, it’s the norm. I’ve always grown up doing multiple genres and styles of music.

That seems like it’s something folks don’t often recognize about that time period. You had artists like Johnny Cash recording albums of hymns, gospel artists crossing over into pop, or even Ray Charles recording Modern Sounds in Country and Western Music. How is the show presented? Is there multimedia?

It’s just focused on the music. For part two of the tour, we probably will add multimedia, as well, but we do include two excerpts of Dr. Martin Luther King Jr.’s speeches: one from “We Shall Overcome,” and one from his final speech that he did at Mason Temple the night before he died.

That final speech has a meaning that is unfortunately still applicable.

Exactly. Exactly. And I sort of feel that he must have known that it was his final speech.

What was the genesis of We Shall Overcome?

About two years ago, I did a performance at Ginny’s Supper Club in Harlem, New York City. One of my friends, Jono Gasparro, who books performers there, wanted me to do a Martin Luther King tribute there, and it was a great success, so we did it the following year. That following year, he invited IMG Artists, and they asked me to take the show on tour, and that’s how it happened.

How did you pick which pieces that were part of this? Were there songs that you wanted to include that didn’t work well within the context of others?

We actually have a large amount of songs — 50 or 70 — and I have some that I do every night, and there are some that we change up every night, because it would be boring for the performers, and it would not be fair for the people in the audience to have to listen to performers that are not engaged at the level of 150 percent.

Also, we have a lot of people that are, to my surprise, following us and flying into different cities. Every night, we have different people that attend the concerts and performances, so we always throw in [different songs] for each market. We also understand that, demographically, for different regions, there are different songs that will be more applicable or more special. For example, when we go to Flint, Michigan, we’re doing music from Motown. It’s really an interesting tour, to be able to do that.

It was astonishing to read that you’re working toward your doctorate while in the process of doing this. Has your dissertation already been completed, then?

No, it hasn’t. The topic has been accepted, though, and it’s on Wynton Marsalis’ Abyssinian Mass, and it’s about the challenges of conducting American music, because they incorporate so many styles and genres, which also goes along with how I’ve come to brand myself — which is as a person that’s not stuck in one genre or style.

How do you balance a two-month tour and working toward a doctorate?

Well, when I finish with the tour, I’m going right back to Houston, Texas, and the Houston Grand Opera, for a libretto workshop for the opera, which I was commissioned to write, and it’s on the life of Marion Anderson. Our last performance is on a Sunday evening in California, and then I fly back to Houston early morning, and the four or five-day workshop starts the following day. So, yeah: I’m always working on a lot of things.

‘We Shall Overcome’ Featuring Damien Sneed: A Celebration of Dr. Martin Luther King Jr. is at the Carlsen Center of Johnson County Community College on Sunday, February 10. Details on that show here.