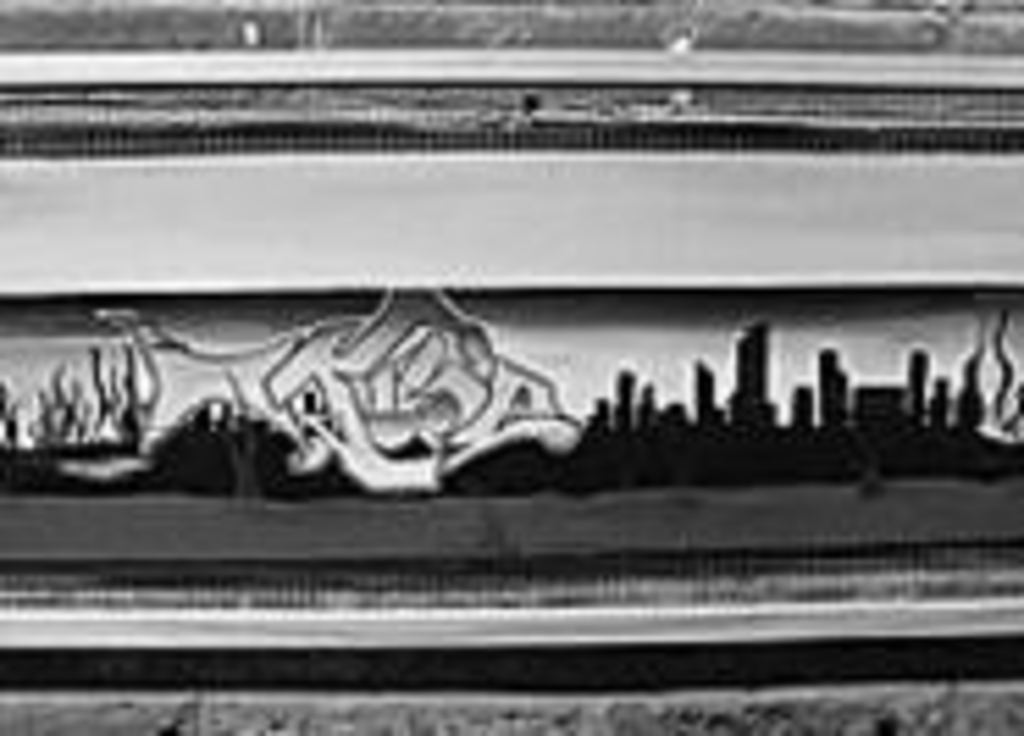 It started in seventh grade. “I was sneaking out, you know,” he says. “After a while, my mom caught on, like, 5 years later. She’s like, ‘If you go to jail, I’m not bailing you out!'” In the 17 years he spent painting walls under bridges and viaducts at 2 or 3 a.m., he never got caught, earning himself the nickname “The Graffiti Ninja.”

These days, Carrillo has made the switch from spray paint on walls to oil paint on board. “I’m focusing on another part of my life that I always knew I’d move on to,” Carrillo says.

He wants to change people’s perceptions about graffiti. “Graffiti’s an art form. Not too many people can take three colors of spray paint and just do something pretty wild. It’s a challenge. It’s a skill.”

Carrillo makes the distinction between the art itself and its presentation. “It’s the application on certain buildings — private property — that’s illegal,” Carrillo says. “It’s only been around for 30-plus years. That’s why a lot of people don’t know how to react to it. They’re like, ‘I know it’s artistic, but … ‘ There’s always that but.”

The oil paintings, most of which are landscapes on narrow horizontal boards, are brightly colored, with deep, black shadows. They look like stylized pictures of walls with graffiti on them. Carrillo adds an environment: highway overpasses, trees, spray-paint cans littered on the ground. And he pays a lot of attention to the skies; some of them are sweeping orange sunsets, others gray and cloudy storm scenes. Carrillo’s paintings have the same barren yet dramatic simplicity as surrealist paintings by, say, Dali. Perhaps that’s because the artist doesn’t sketch things out in advance.

Carrillo got his artistic talent, not to mention some support, from his dad, who used to draw years ago. Back when he was still doing graffiti, Carrillo’s father gave him a card with a picture of Mickey Mouse on it that read “Leave your mark on the world.” Inside the card, his dad had scrawled, “And Brush Creek.”