Czar Bar is closed, but why? (updated) 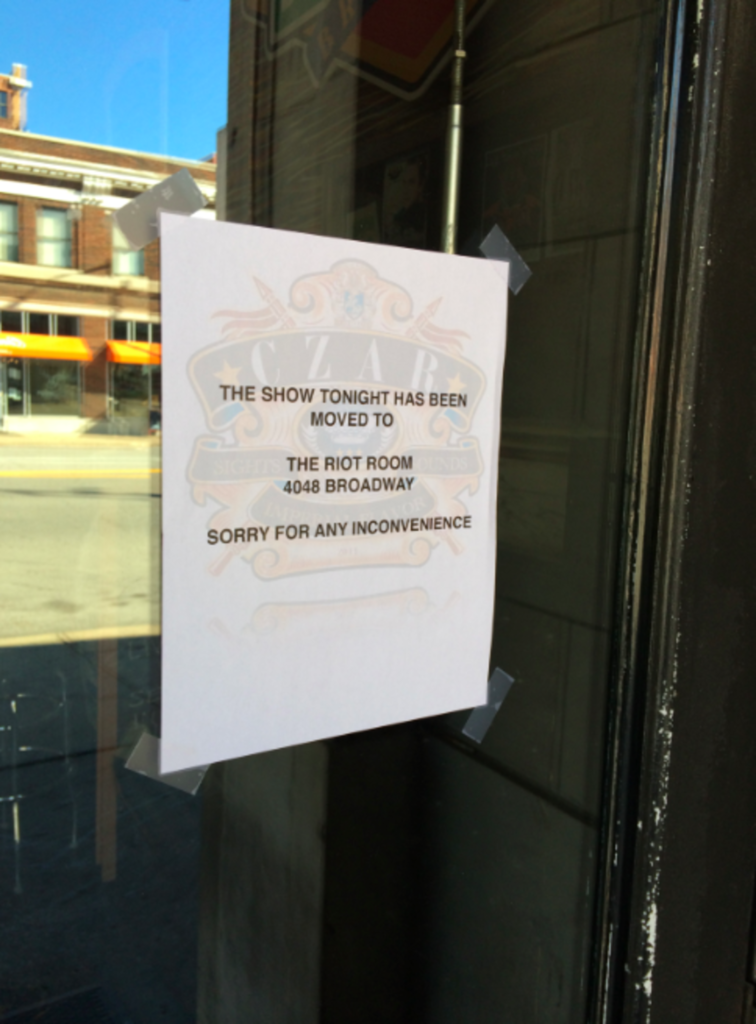 Several touring acts with shows scheduled at Czar Bar recently have had to find a different venue or skip Kansas City altogether.

We’re hearing conflicting stories about what’s going on with the Crossroads bar and music venue at 1531 Grand. John Hulston, an owner of Czar, couldn’t immediately be reached for comment on Tuesday.

UPDATE: Hulston, as per his comment below, sold his interest in the Czar Bar in 2011. Hulston is not responsible for any of Czar Bar’s obligations since 2011. We regret the error.

Without going into too much detail, we’ve been having a difficult time working out amicable terms / lease with the current property owner(s) (although the decision to terminate agreements were much more abrupt than we anticipated)!! Everyone had really just hit the end of the road trying to get things worked out moving forward, so it seemed best for everyone to move on / go a different direction with the space. Nevertheless, I believe there will be a new tenant there very soon, although, I’m not quite sure yet what it will be exactly, and what the nature of it will entail.

A sign on the door directs visitors to the Riot Room for “the show tonight.”

But it appears that sign has been on the locked front door for at least a few days. Songwriter Rich O’Toole was scheduled to play at Czar tonight, but his management tells The Pitch that he will not play the Riot Room or anywhere else in Kansas City on this tour.

“Unfortunately, Czar Bar has had a sudden venue closure and is not able to accommodate the show,” says Madeline Sullivan, a manager for O’Toole.

His publicist had a somewhat different story.

“We just found out that Czar Bar had a water main break and needed to cancel the show,” says O’Toole publicist Laura Goldfarb. “It’s not rescheduled at Riot Room, but canceled completely.”

Czar posted on Facebook this afternoon: “The Rich O’ Toole // Novel Ideas event for tonight has been canceled. All tickets will be refunded. Thx!”

The sign on Czar’s door directing people to the Riot Room might have applied to Chicago metal band the Atlas Moth, which tweeted out that its October 23 show at Czar also got moved to the Riot Room.

The Kickback, a South Dakota rock outfit, was slated to play Czar Wednesday night, but that show has been moved to the Riot Room.

“We just got word that Czar Bar is permanently closed, so we are playing at Riot Room, either inside or outside,” reads an e-mail from the band in response to an inquiry from The Pitch.

Phone calls to Czar’s listed booking number went to a voicemail that did not accept messages.

Court records indicate that a business entity called Czar Bar I LLC was hit in January with a $38,929 tax lien by the Missouri Department of Revenue. That amount, according to a tax lien certificate, represents taxes owed going back to 2011 through April 2013, plus interest. Czar Bar I LLC, according to state records, is the licensee name for Czar Bar at 1531 Grand.

We will update this story as we learn more.