Cyrus Console, KC poet and teacher, turns himself into a different kind of writer with his Romanian Notebook 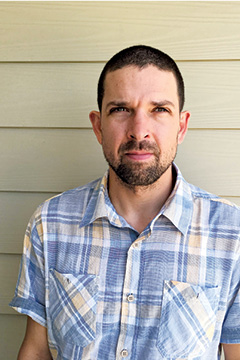 It’s the kind of homegrown coincidence familiar to Kansas Citians who spend time away from here. Months ago, in preparation for a trip to Romania, I bought a guidebook online. Long after I’d returned, I got an email from Amazon telling me I might also like Cyrus Console’s Romanian Notebook, published in March of this year. With the country still relatively fresh in my mind, I clicked the link, read the description (it wasn’t a guidebook, Amazon told me, but rather a memoir) — and saw that Console lives here and teaches at the Kansas City Art Institute.

I bought the book, and I found that Console, an acclaimed poet from Topeka, had written something powerful and enigmatic, for which memoir isn’t quite the right word. Part travelogue, part journal and part window into the mind of a worried man, the book covers a monthlong trip to Romania the author took with his pregnant wife and their child. Right before they leave Kansas City, a test shows the fetus to be at an elevated risk for Down syndrome. Isolated by language and culture and anxious about the test results, Console finds a kind of comfort in recording his thoughts and observations in a notebook. The published version, in fewer than 200 pages of near-pristine prose, expands from a diary of his concern about the unborn baby into a rumination on language, writing, chess, Romanian food, pot, insects, addiction, time and regret. The Los Angeles Review of Books has called it “among the strangest, most compelling representations of human thought in contemporary literature.” It’s also gorgeous, funny and moving — unlike anything I’d read in a long time.

I contacted Console by email — he was back in Romania at the time — to ask him a few questions about his book, writing, and how travel can alter the way we think.

The Pitch: Several times when I was reading Romanian Notebook at a coffee shop, people asked what it was about and, because it’s about so many things, I had a really hard time describing it in a way that conveyed how compelling it was. When people ask you what your book is about, how do you answer?

Console: I say it’s about traveling with my wife and young child in Romania. I sometimes feel obligated to add that the book deals with “awkward” or “difficult” experiences. This is funny because there was nothing awkward or difficult in writing about anxiety, addiction, shame, awkwardness or other difficulties. During the trip these were the contents of my rumination —rumination in the clinical sense of being trapped in a loop of anxious thought — and these subjects provided the most easily available — at times the only — available material for the writing. I don’t know where that sense of obligation comes from, unless from the vague idea that polite, respectable people don’t talk about problems. Maybe the respectable thing is to be focused on solutions.

A description of the book that I really like, on the other hand, comes from the writer and critic Michael Clune, who said that it was about thought, “the complex organization of individual thoughts and thought clusters.”

You write that in Romania you were behaving for the first time in your life “like a real writer.” Yet you’ve written and published two critically acclaimed books of poetry, you have at least two degrees in writing and you teach writing at the Kansas City Art Institute. How is behaving like a real writer different from being a real writer?

In Romania I really felt like I had something to say, and it seemed like there was not enough time to write it all down. I think this happened in part because I became focused on recording experience rather than on conceiving or inventing something like a poem or work of fiction. As soon as my daughter went down for her nap, I would walk to the coffee shop, drink three or four espressos, and write furiously, as they say, for two hours. And because I had this project going, throughout the other hours I would pay particular attention to what I experienced. The day felt like one long mental note.

This quality of attention and focus, and especially this drive to write, were unfamiliar to me, and they fit with my fantasy of what a writer’s practice should be. But what my practice has generally been instead is feeling inspired or awed or moved by poems or novels or certain moments of being in the world, wishing to understand or absorb these things thoroughly enough to reproduce some part of them in writing, trying, getting my hopes up, failing, then feeling bad about the failure. By far the largest part of the effort I’ve put into writing has gone toward waiting out or pushing through the long periods of feeling that it was impossible.

Is there something about traveling in a foreign country that allows — or maybe even forces — the mind to wander in a way that it doesn’t do at home?

Yes. In fact I think there are two kinds of alienation at work here. We still live in a world where everything has a national flavor. Being in a different country means a change of scenery so complete that force of habit does nothing to tune any of it out. Infrastructure, food, music, countryside and the inescapable messaging of advertisers are all experienced as if for the first time, whereas it’s very hard to see anything wondrous in the versions of these things that invariably exist at home. It makes me think about the saying “as plain as the nose on one’s face,” which I have always taken to mean that the speaker perceives something as obvious as the nose on the listener’s face. But the deep truth of the cliché involves the other nose, the speaker’s. The nose is the only part of the body that is always in the visual field. It is the only part of the visual field that never changes! And it takes real effort for us to see it at all.

Have you always kept a journal?

I have tried to start a journal many times, but the Romanian Notebook is the only effort that went anywhere. As a poet, I usually keep a notebook, but I see that as a different thing, mostly just a collection of phrases. I think the most powerful journal entries I’ve read are the Kafka ones that are just a row of X’s.

Kansas City’s literary community seems to be gaining a bit of national attention at the moment with a handful of high-profile books by local authors and a growing number of writing programs and graduates. Where do you see yourself in that scene?

One of the best things about Kansas City’s writing scene is how it is integrated with the art scene. I’m glad to be a part of the Kansas City Art Institute’s excellent creative-writing program, a continual stream of talented and dedicated aspiring artists and writers. I’m also grateful for institutions like the Common Sense Reading Series, which regularly brings excellent writers to town, and the Charlotte Street Foundation, which provides support to artists and curators of all stripes, including those who work with words.

Who do you think has a strong voice in Kansas City right now?