Cydney Ross’s Structural Integrity, at Kiosk, breaks down architecture before we break ourselves 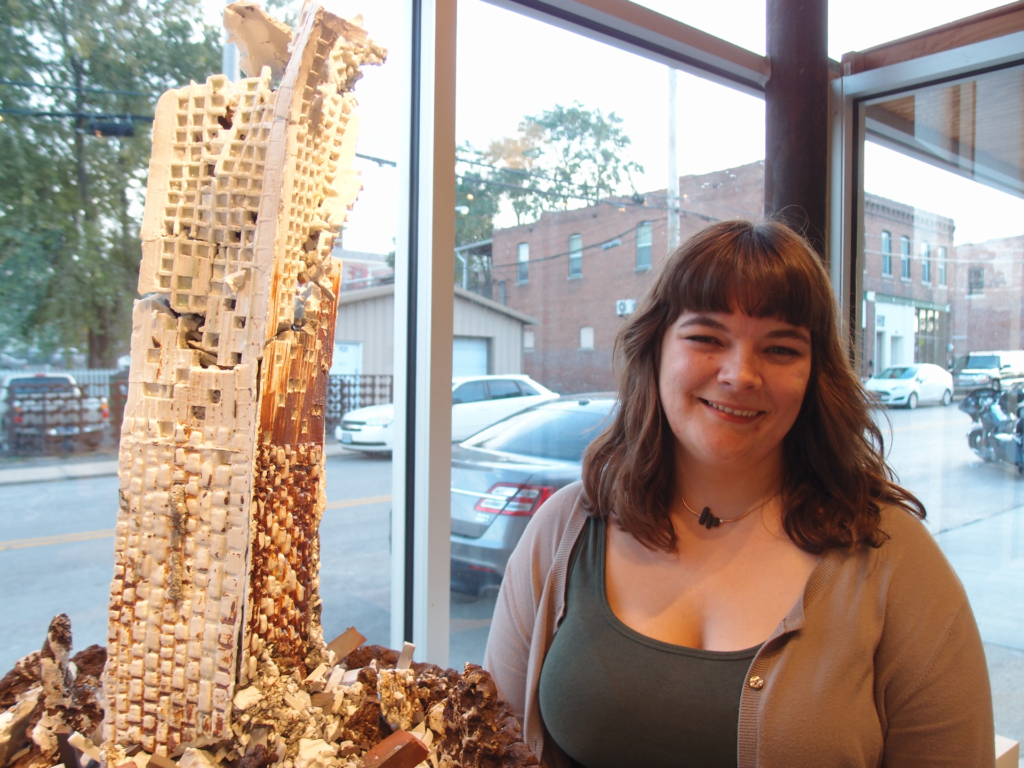 It’s nearly impossible for me to look at the title piece of Cydney Ross’s first solo exhibition, Structural Integrity, and not see a reference to the World Trade Center, destroyed on 9/11. But in this collection of eight large clay buildings and three smaller studies, the sculptor isn’t drawing such literal associations.

Architecture, her art reminds us, frames our space. It represents human intervention to change the environment, and then it, too, changes, altered by more human activity or by nature’s long rebuke. Ross, a 2013 graduate of the Kansas City Art Institute’s ceramics program and an ArtsKC advanced fellow, is interested in the arc of various structures — bridges, skyscrapers, Asian pagodas, the iconic dome of the U.S. Capitol Building. She’s drawn to the process of construction as well as by what happens much later. The deterioration, sometimes due to neglect. The tearing down. And the decimation wrought by combat.

“To see built environments ravaged by war,” she writes in a statement for this show, “makes me wonder how we got here and where we’re heading as a society.” 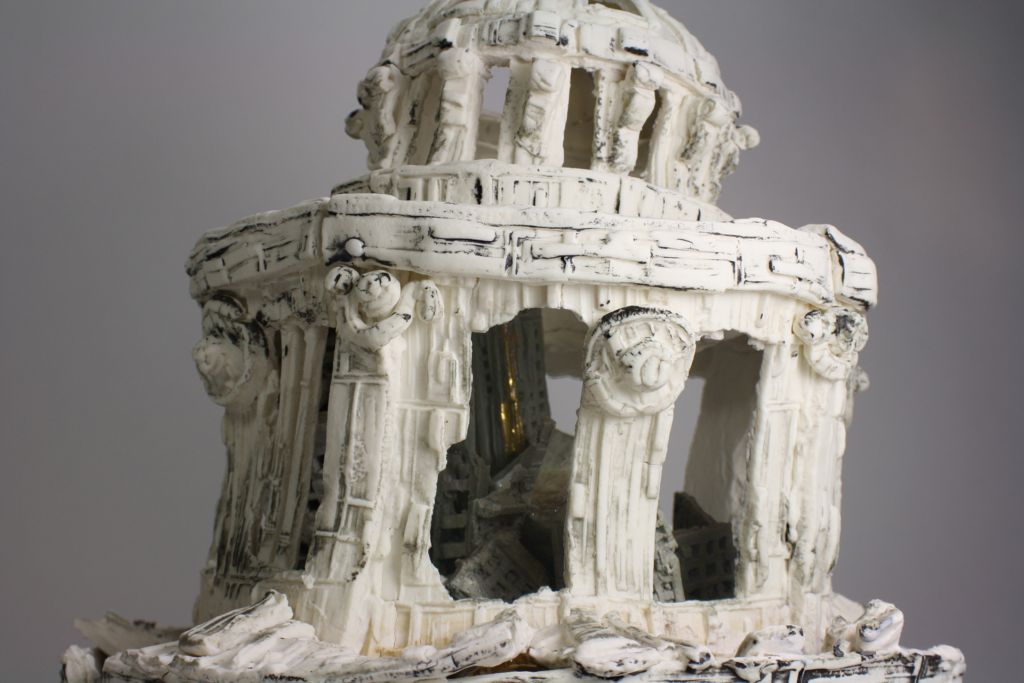 She is an optimist, though — a ruins-half-full sort. Her buildings, which rise up in twisted ways from dark bases of rich, rough earth, are not representations of a done-deal apocalypse. We see broken shards, pylon pieces, bits of rubble, yet Ross makes this somehow beautiful. The ravaging hand at work seems to have been neutral, expressing not one or another side of a conflict but rather time’s passage. Her sculptures don’t answer questions as much as they ask us what we see: a coming together or an unraveling.

On the eve of her exhibition’s opening, at Kiosk Gallery, Ross told me she has tried to be politically active — attending protests, voting, donating to charities. She said she’d been inspired rather than discouraged by the conversations undertaken since the 2016 presidential election. But as an artist, she wants her work to transcend topicality.

“I’m consciously trying to channel the craziness going on,” she said. “Things are scary right now, but there’s an awakening going on. People are more willing to talk about issues they find taboo. We have a responsibility to talk about what’s going on in the world.”

The buildings in Structural Integrity, she added, are a kind of cautionary tale. What crumbles before us at small scale prods us to make a difference while there’s time, to change things now and maybe stay ahead of disaster. 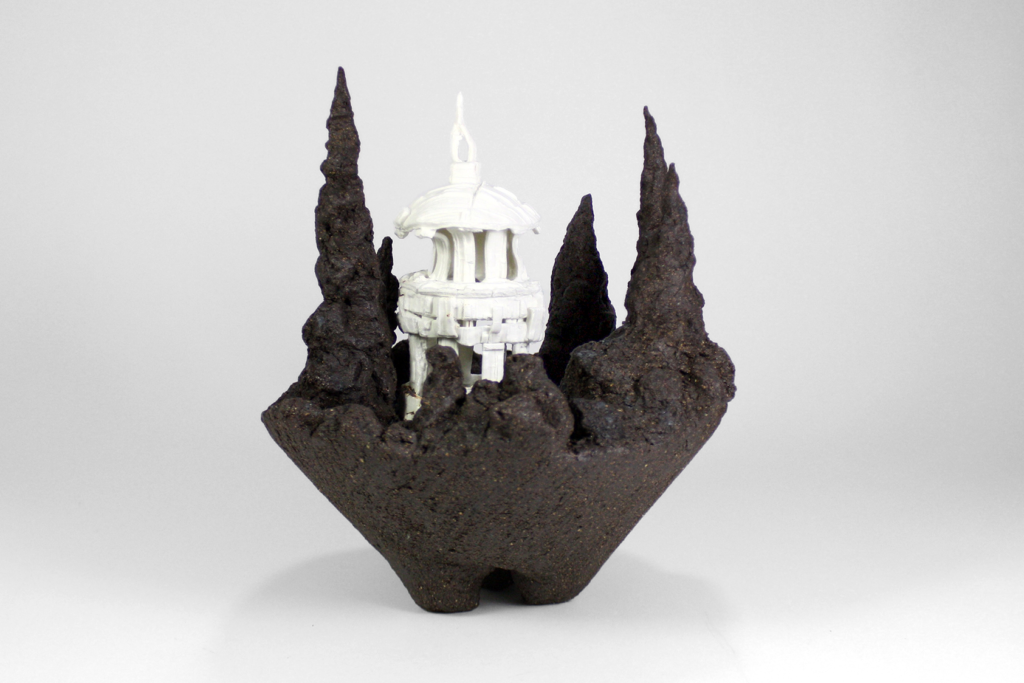 Ross told me she’d been influenced lately by The Battle for Home, architect Marwa al-Sabouni’s 2016 book about Syria’s colonial-influenced built environment. Among its lessons is the way in which the Brutalist architecture imposed during the first half of the 20th century contributed to societal breakdowns. When we look at bombed-out concrete blocks in Homs or Aleppo, we don’t immediately recall that the buildings were not culturally native.

There are elements of this history in the works at Kiosk, with titles such as “Rise,” “What Will It Take,” “Structural Integrity” and “Calling In.” In the porcelain blocks waffled with windows, we see: “Please, let’s talk about invasion. Let’s discuss war.”

When Ross and I came to “The Badlands” — a low, compact sculpture whose stoneware base is stretched into geological spires sheltering a small, domed building that’s topped with its own reaching spire — she told me that it references an episode of sexual harassment. With #MeToo crescendoing on social media even as we were talking, I felt in Ross’s art the post-2016 collective openness to talk about what is keeping us fractured and in pain. “These problems have always been here,” she said. “They are just more apparent now.” 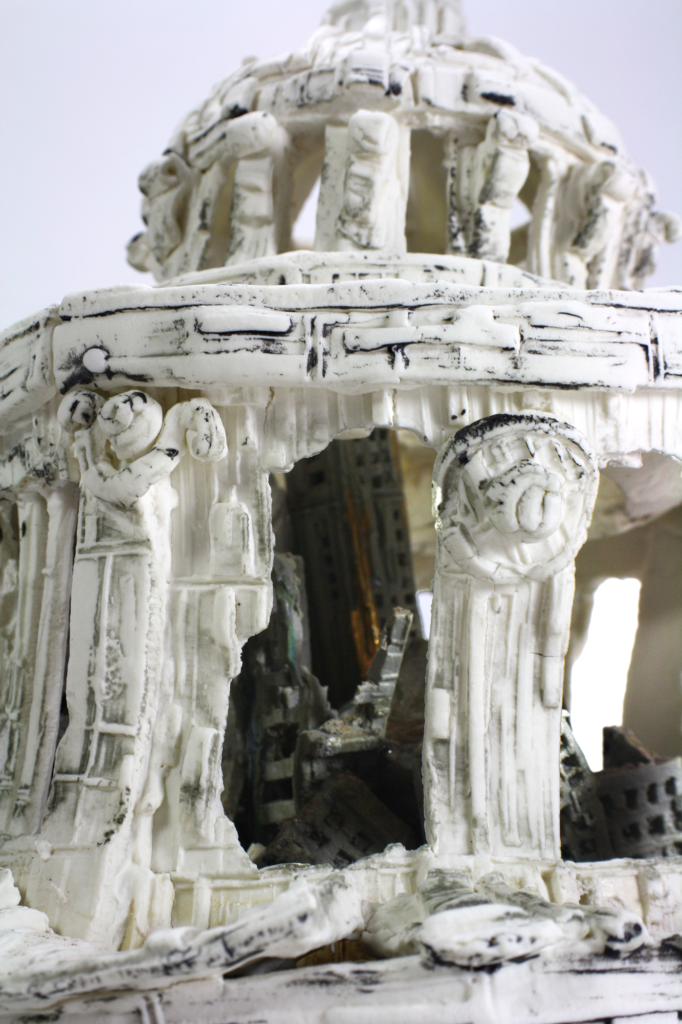 Take “The Weight of the World,” a masterful rendition of the U.S. Capitol’s neoclassical forms, slumped and sunk into an upturned bowl for a base, mirroring the dome above. There are broken buildings inside, a few of them painted with highlights of gold. Money in politics, America’s vast resources, the complicity of Congress (and its electors) in violence of all sorts — these themes roll around in the tension Ross physically captures in clay.

There is tension between control and chaos in all the works here, created through techniques such as overfiring terra cotta (basically burning the material until it fails) or freezing and thawing porcelain before it goes into the kiln (also a way to induce structural failure). Ross wants the unexpected to play a part in her sculptures at their creation. Natural forces (chemistry, gravity) outside of calculated control helped to build all of this art. And in every accident, Ross tells us, there may lie an opportunity — though taking advantage of any such luck to bring about change requires work.