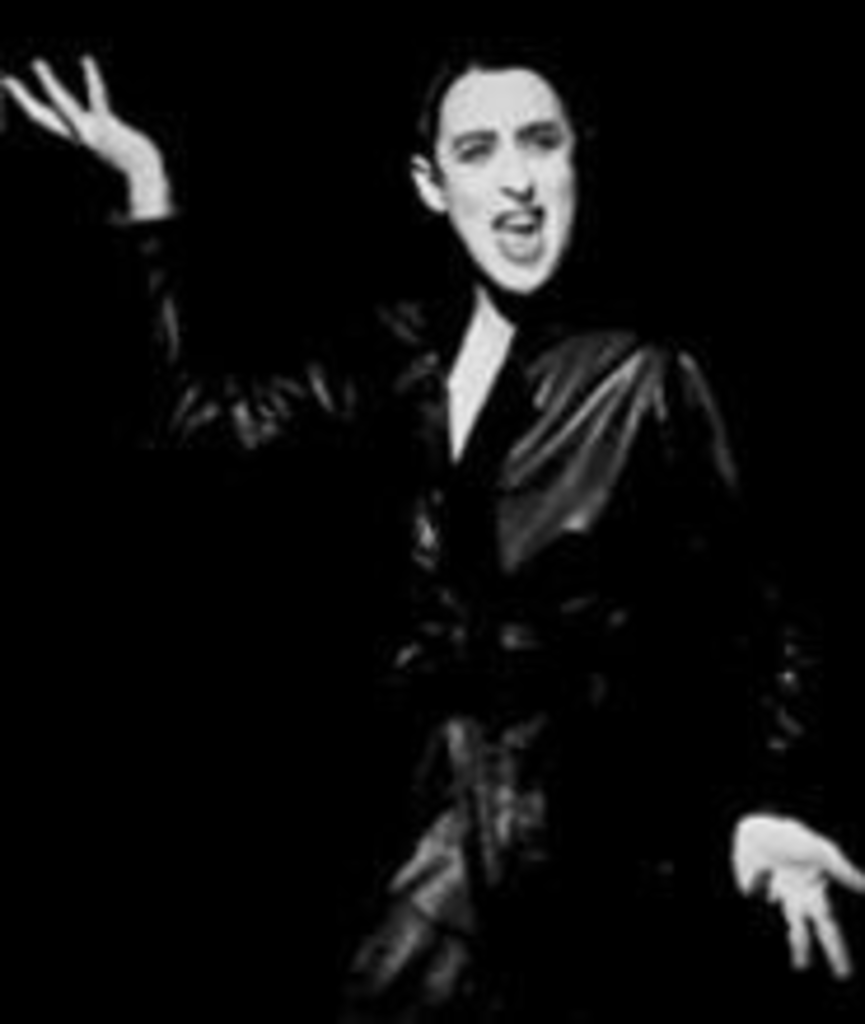 “I am fearless,” says the man who won a Tony for portraying the bi-and-high Emcee in Sam Mendes’ 1998 revival of Cabaret, then turned up as Sylvester Stallone’s sidekick in the daft, sloppy 2000 remake of Get Carter. “Yes, I have no fear, and there’s nothing to fear but fear itself. There’s no place for fear. Fear equals shame. No, thank you. And I love being with people who have no fear. Sometimes, people are attracted to me because I’m fearless, and they sort of get this vicarious thrill out of it, and I like that. I like going out for a night with people and they know something exciting’s going to happen.”

“The next thing I’m doing is, I’ve taken pictures of goody bags I’ve gotten at various functions I’ve been to, and I take all the things out of the goody bags and take a photo of them and then grade the goody bags,” says the actor who, in 1999, played both the flirtatious hotel desk clerk in Stanley Kubrick’s sex-free porno Eyes Wide Shut and “Rooster” Hannigan in the Wonderful World of Disney version of Annie. He’s referring to the totes handed out to celebrities whenever they attend award shows or benefits. One of the most astonishing things about Hollywood is that the people who least need free crap are the ones who always end up walking away with bags full of jewelry, perfume, clothing, even food.

“Sometimes, they’re really mean,” explains Cumming, who flashed his ass in Julie Taymor’s decadent 1999 cinematic interpretation of Shakespeare’s Titus before going off to play villains in Spy Kids and Josie and the Pussycats, which opened within weeks of each other earlier this spring. “You go to posh functions, and inside the bag is a copy of Vanity Fair and a pen, and then you go to other ones and it’s full of fabulous things, like money. I find it hilarious that the more money I have, the less things I have to buy, because people give me things for free. Clothes, for example. Like, they send me things to wear for interviews or stuff. They give you things to borrow or keep, depending upon who they are. I was looking at the labels for this thing I’m wearing today, and it’s $1,200 for this little ensemble I’ve got on, and it looks like something you could buy at the Gap for about $150, and I would never, in a million years, pay that money for it. But I don’t have to. Isn’t that the ironic thing?”

Indeed, much of the press surrounding The Anniversary Party—in which Cumming and Leigh play an estranged-then-reunited couple celebrating their sixth anniversary with the likes of real-life pals Kevin Kline, Phoebe Cates, Jennifer Beals, John C. Reilly, Parker Posey and Gwyneth Paltrow — has focused on how the film is Cumming’s debut as a writer, which isn’t at all the case. In 1990, he adapted Dario Fo’s play Accidental Death of an Anarchist for the British stage; the revival, about the British government’s wrongful imprisonment of innocent men accused of committing IRA-sponsored violence, won an Olivier Award. In 1995, he wrote and directed the short film Butter, which starred his soon-to-be ex-wife Hilary Lyon as a woman with an eating disorder. He also wrote and starred in the short-lived BBC series The High Life, set on a Scottish airline populated by a “mad” group of employees; for a short time, there was some talk of it becoming an American TV series.

“It’s kind of a funny thing,” Cumming says. “People think the only work you’ve done is what they know of, and that, for me, is whatever I’ve done since I came to America—like Cabaret, for example—even though they might have seen me in films before. When things are not in front of people, they don’t really remember them. And some journalists are so lazy that they come in and ask you questions that you just laugh at. The great thing about having a Web site is you can actually say to people, ‘You know what? Just go to my Web site and find out all this more accurately. I can’t believe I come to this more prepared than you are. I mean, I’m the one being asked the questions.'” He giggles.

For the past year, it has been damned near impossible to miss Cumming; his is a most recognizable face—beneath the occasional dollops of makeup, that look of mischievous innocence is striking and unmistakable—even if the name eludes you. Aside from Josie, Spy Kids and The Anniversary Party, he can be spotted in writer-director Doug McGrath’s woeful Company Man (alongside Sigourney Weaver and Woody Allen) and in Alan Rudolph’s forthcoming Investigating Sex, in which he appears with Nick Nolte and Neve Campbell. He could also be seen during the season premiere of Sex and the City as a bitchy fashion designer dressing Sarah Jessica Parker in little more than underwear and a robe. And come July 19, he will be in San Francisco once more hosting the Webby Awards—though he can’t figure out why he keeps agreeing to host awards shows when, in truth, “I find myself in situations where I think, ‘What the fuck am I doing this for? I could be at home watching telly, and I’ve chosen to come out here and sing a song or make a speech. You must be mad.'”

“Sometimes people are very snobby,” he says, this time without the giggle. “Sometimes people say, ‘Oh, I expect you don’t want to be reminded of this,’ about some film or something I’ve done. And I’m like, ‘Well, if I didn’t want to be reminded of it, it would be a pretty stupid thing to make a huge film that millions of people are going to see.’ You do things for very different reasons all the time, and there’s nothing I’ve ever done that I really have not wanted to do or have regretted doing. Some things haven’t turned out as well, but there are lots of reasons why you do things.

“It’s about fun. I want to have fun; I want to challenge myself, but, above all, I want to enjoy things, and that can mean hanging on a wire dressed as a green alien, or it can mean playing Hamlet. Each thing is valid, and I just don’t have any time for that kind of inverted snobbery, actually, about acting. People are threatened or confused when you do different things. But you just have to go on with your own thing and not let the bastards get you down.” This time, he giggles.