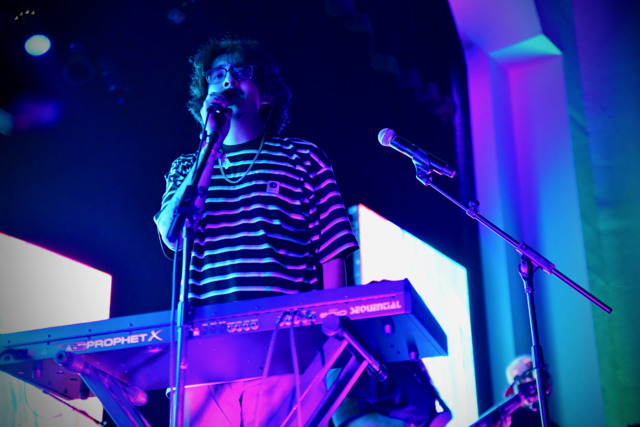 Cuco — real name Omar Banos — is a 21-year-old, first-generation Mexican-American musician whose star began to rise in 2016 after some lo-fi originals and a guitar cover of Santo & Johnny’s “Sleepwalk” found an audience on Twitter and SoundCloud. The labels came knocking, but Cuco continued to release new material independently while growing a rabid fanbase through tours. It all paid off in March, when Cuco signed a seven-figure deal with Interscope. His major label debut, Para Mí, arrives at the end of the month, and on Monday night Cuco made his first-ever stop in Kansas City, at a sold-out Madrid Theatre.

There are plenty of reasons to like Cuco. A Hawthorne, California native, he embraces his Latinx heritage to a degree that’s unusual for stars of his age. Cuco’s performance was preceded by a jubilantly received set of Spanish-language pop hits, and one of his guitarists entered and exited the stage holding a Mexican flag over his back like a cape. And don’t let his unbothered demeanor and low-key wardrobe fool you: Cuco is a heartthrob, and the girls were screaming. He’s an internet R&B everyman, a bedroom pop people’s champ. He’s also, by all accounts, a funny and friendly guy, so if you like a few songs, there’s really no reason not to call yourself a Cuco fan.

On Monday, Cuco brought along a four-piece backing band and gave the crowd an hour’s worth of more or less exactly what they wanted. At the moment — and I’m not confident Cuco has fully come into his own as an artist yet — Cuco excels in writing and performing three types of songs: the lovesick R&B ballad; the woozy, drugged-out psych pop number; and the honest and uptempo rap banger. Sometimes the psych song is heartbroken and the R&B song is inebriated, but more or less, these are the formulas in play.

Highlights included the gentle guitar plucking of “Hydrocodone,” the lead single from Para Mí. The song set the crowd swaying and paired nicely with the colorful, hypnotic visuals played on the stage-length LED screens. The bubbly, bass-shaking “Bossa No Sé” saw Cuco and his fans hopping more vigorously than at any other point; it felt like an angstier counterpart to Drake’s “Hotline Bling.” Back-to-back renditions of the synth-heavy “Amor De Siempre” and “Lo Que Siento” served as the emotional core of the show, featuring passionate fan sing-alongs and trumpet parts played by Cuco himself, showcasing his undeniable knack for subtle earworm melodies. Perhaps Para Mí or another future release will see Cuco achieve a more unified sound and performance, but Monday night’s gig made for an admirable introduction nonetheless. 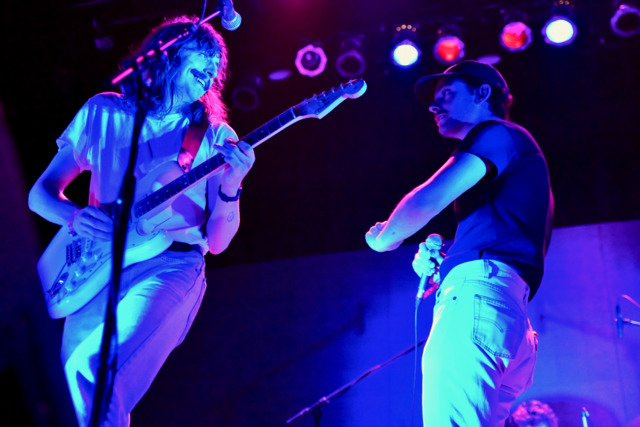 Trendy New York R&B and pop outfit Triathalon provided direct support for Cuco in the form of a 25-minute set whose ratio of catchy grooves and dreamy hooks to sleepy, falsetto-laden, space-out filler was approximately 1:4.

Chicago teen Victor Internet and his band opened the show. The crew’s performance (also R&B and pop-centric) was a tad loose and lacked the confidence of the acts that followed, but Victor occasionally harnessed an impressive starpower similar to the night’s headliner, drawing a similar passion from the fans on those occasions.