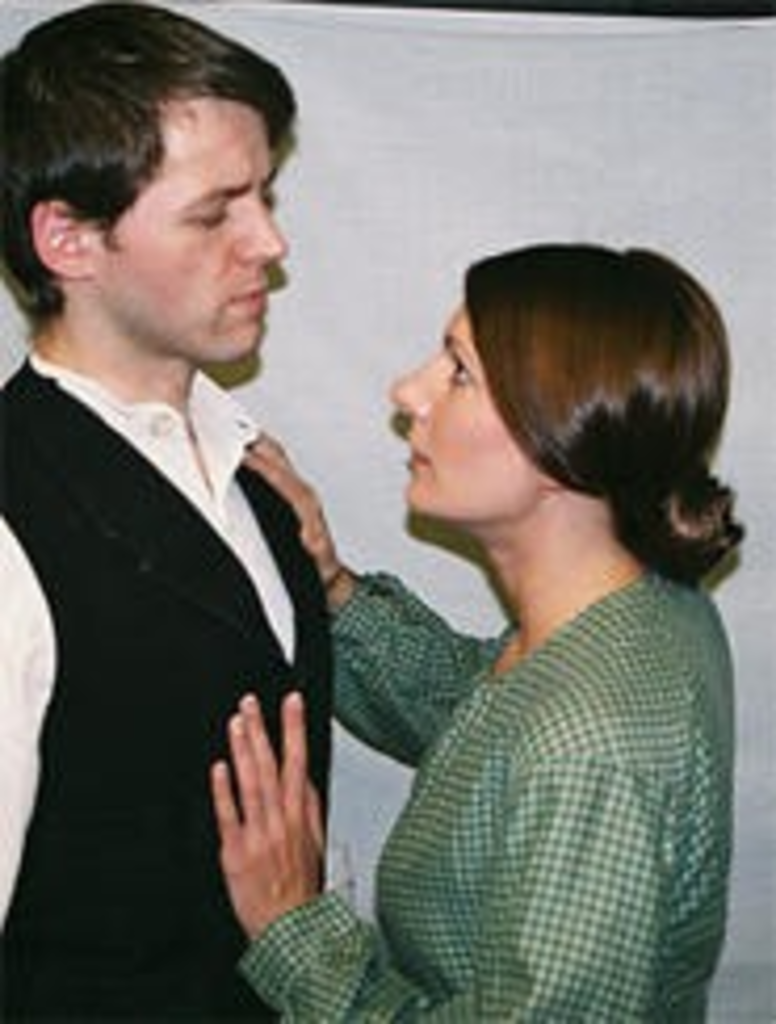 From the start, when a young boy playing with a knife slices his own mother, you know Broken Strings won’t end well. What isn’t immediately apparent, though, is that the premiere production of this engaging and upsetting new play from local historian Bill Rogers is the rarest kind of nonprofessional mounting: one that is a tragedy by genre only. From the raw materials of the local past, Rogers has crafted an urgent tale of frontier violence and misguided principle, a story as dedicated to who we are as it is to the way we were.

A knife pricks the show’s first blood, but it’s really all about guns. Set just after the Civil War, in the hinterlands where Missouri meets Kansas and whole towns met the torches of their across-the-river neighbors, Broken Strings is more gun-crazy than talk radio. A sign in the theater warns that audiences will be subjected to “adult language and gunfire.” And the Flynn family cabin set, where all the action takes place, is positively bedecked with firearms: other than a bucket, a table and a portrait of grandfather, guns dominate the décor. It’s like sitting in Dick Cheney’s brain.

Guns are central to frontier life, of course, but here they are terrifyingly prominent. The kids scamper about with them, pretending to shoot one another. John Flynn, the family’s grim patriarch, thinks nothing of pulling one on a friend who has blasphemed. Eventually, it becomes a joke, black as pitch: every drawer and bucket in that miserable cabin seems to hide another pistol, just as every turn of Flynn’s thinking leads to yet another justification for violence.

The story is simple but pregnant with relevance — half the characters could be wearing “Stop Snitching” T-shirts. John Flynn (Nigel Delahoy) is a Missour-ah transplant who earned his Show-Me bonafides by burning Shawnee, riding with Quantrill, and chucking the Catholicism that got his family chased from Philadelphia. Frontier life has robbed his wife, Annie (Trisha Pasdach), of music and conversation. Several times a day, she haunts the family plot, mourning the children who didn’t make it. The two surviving boys are sumbitches in the making.

When Flynn’s outlaw friend Jimmie Conlin — leader of hell-raising raids against the Jayhawkers — is shot by a Pinkerton officer, Flynn drags him back to the family cabin to wait out the law. Jimmie is dying, and it occurs to both Annie and superstitious family friend Terry (a funny, compelling Jack McCord) that they could give Jimmie up for the $500 reward.

John, though, would die first, for reasons he can’t quite articulate. Like much of what’s wrong in the world these days, his decisions have less to do with reality or good sense than they do with, vaguely, the Bible and, much more explicitly, preconceptions about men and ball size. What ensues is a sometimes tense, sometimes philosophical and ultimately tragic investigation of the idiot brinksmanship at the core of much American violence.

Rogers’ dialogue, rambunctious and colloquial, is often casually informative about the past. More important, he illustrates ideas through action, rarely losing sight of the central drama. (Occasionally, he overstates what we know already.)

The cast of well-directed amateurs is marked by good intentions but also by uncertainty: What to do with hands, where to place emphasis, how to demonstrate competing feelings? The show succeeds, but too much of the work of sorting out what’s important in a scene falls to us.

Rogers and I teach at the same college. (Before I ran into him at this production, I had never seen him or communicated with him.) Like many area schools, ours has sprouted stickers on many of its doorways warning — via a red slash-and-circle logo straight out of Ghostbusters — that you can’t pack heat here.

This is the terrifying world the John Flynns have wrought, one where guns are so goddamned common that such signs are necessary. But it might be more practical for Kansas and Missouri to swap these signs for the one outside the theater: “This play contains adult language and gunfire.” Change “play” to “city,” add something like “plus some talk about Jesus to justify it all,” and then we could hang it outside KCI.