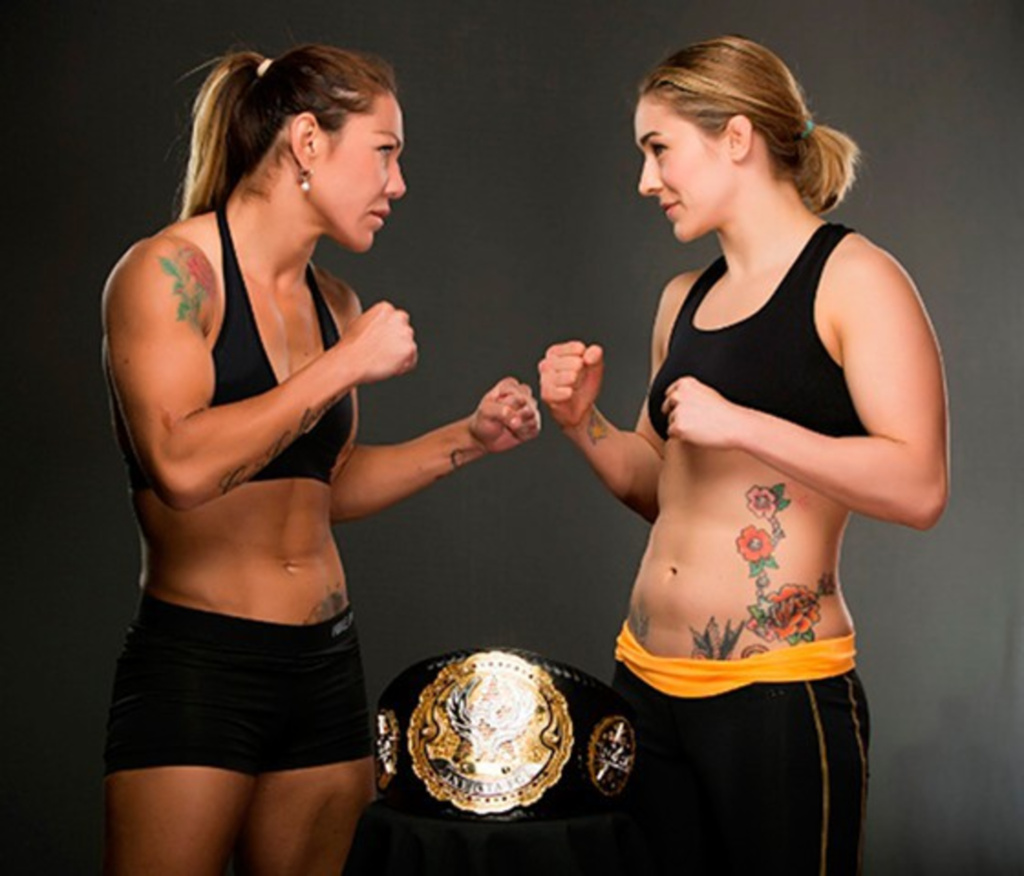 Coenen survived four rounds with Cyborg, but the Brazilian muay Thai machine’s onslaught was too much and ref “Big” John McCarthy stopped the fight. Cyborg repeatedly whipped Coenen to the the canvas throughout the fight and relentlessly punched Coenen.

To her credit, Coenen didn’t quit and seemed to frustrate Cyborg while lying on the ground and throwing kicks. She didn’t shy away from Cyborg, but the fighting machine repeatedly whipped her to the mat and pounded her with punches.
In the first round, Cyborg dropped Coenen with a punch, but couldn’t capitalize on a grounded Coenen, who kept Cyborg away with kicks. Cybrog wanted her on her feet and went on the offensive. She whipped Coenen to the ground with about 30 seconds left in the round.

Cyborg trapped Coenen against the cage and pounded her with punches, but Coenen wasn’t through. As the third round came to a close, Cyborg unloaded with knees.

In the fourth, Cyborg rocked Coenen with a huge right, sending her crashing to the mat. Cyborg followed with punch after punch on her downed opponent. The match continued, but Cyborg’s onslaught proved too much and the ref stopped the fight.

Worth noting: Miesha Tate, who is scheduled to fight UFC women’s bantamweight champion Ronda Rousey in the co-main event of that promotion’s December 28 card, watched the card unfold.

Ayaka Hamasaki vs. Claudia Gadelha (115 pounds): Gadelha wrecked Hamasaki in the first with an illegal knee while she was on the ground at the end of the round. The ref docked her a point for it. It didn’t end up costing her as she pounded Hamasaki to get the TKo victory.

Sarah D’Alelio vs. Lauren Taylor (135 pounds): Three rounds of fighting that finally picked up in the final seconds with Taylor winning by unanimous decision.

Jennifer Maia vs. Leslie Smith (125 pounds): Leslie Smith threw more punches in this fight than 99 percent of the planet could, and it earned her the victory. Maia and Smith traded punches and kicks. Lots of them. Smith swings her legs like battle axes. This was a straight up “pier-six brawl,” and another fight-of-the-night contender. Smith is vicious, and her fights are must-see.

Jessica Penne vs. Nicdali Rivera-Calanoc (105 pounds): With just two seconds left in the first round, Penne made Rivera-Calanoc tap to a read-naked choke. “Rowdy” Roddy Piper would have been proud of that sleeper lock.

Norma Center vs. Joanne Calderwood (115 pounds): Calderwood looked like a preying mantis creeping up on Center, throwing knees, kicks and punches. But Center took the Scot down to the mat and to the three-round limit. Calderwood won via unanimous decision, keeping her perfect record (7-0 now) intact.

Bec Hyatt vs. Mizuki Inoue (115 pounds): The 18-year-old Inoue put Hyatt on the ground and against the cage in the first and second, which ended with the “Rowdy” Aussie unloading on Inoue. The fight went three rounds with Hyatt blasting Inoue with punches in the third. But the judges awarded a unanimous decision to Inoue. And yes, she’s only 18.

Duda Yankovich vs. Miriam Nakamoto (135 pounds): Nakamoto’s knees proved deadly again, scoring a first-round TKO over Yankovich. The Queen of Mean’s knee landed in Yankovich’s face, making her crumple against the cage. Nakamoto continued the onslaught until the ref stopped it in 2:08.

Tecia Torres vs. Rose Namajunas (115 pounds): The last time “Thug” Rose fought for Invicta, this happened in 12 seconds (and it was awesome). And she tried it again … but Torres didn’t tap. Torres, also known as “The Tiny Tornado,” fought back — and won a unanimous decision. The first round was a slugfest. Torres unleashed a flurry of punches in the second round — and some big kicks. Thug Rose took a beating, but ended the round with a kick to Torres’ stomach that sent her crashing to the mat with mere seconds before the end of the round. The third ended with the two on the ground —- and an early contender for fight of the night.
[page]Prelims:

Emily Kagan vs. Ashley Cummins (115 pounds): Kagan and Cummins went three rounds, and Kagan wins a split decision. The two exchanged big, knockdown blows in the second round, and Kagan tried to cut down Cummins with a series of kicks. Cummins, from St. Louis, Missouri, latched onto Kagan’s back near the end of the round, but Kagan escaped as the round ended. The big blows kept coming in the third, but time expired.

Kathina Catron vs. Livia Von Plettenberg (105 pounds): Likely the youngest fan in attendance screaming encouragement for Catron — “you can do it, momma,” “you can win this”) — but she couldn’t defeat “T-Rex” Von Plettenberg after going the distance. The judges awarded Von Plettenberg the fight by unanimous decision. Catron, who took the fight on 24-hours notice, probably has a new corner man boy.