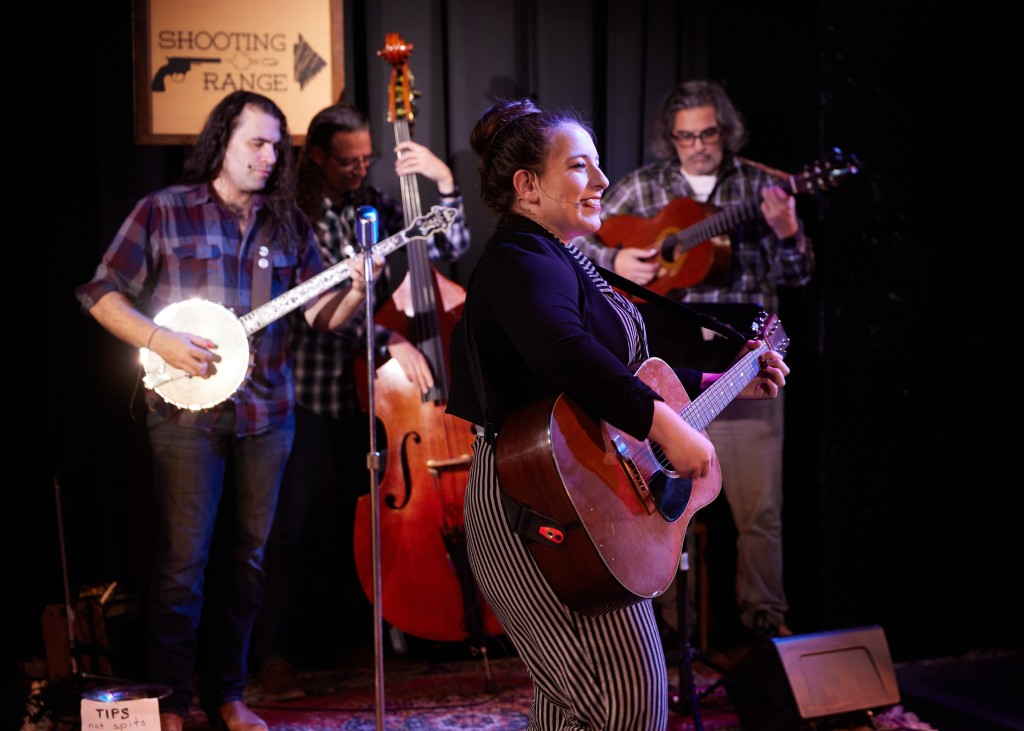 Sam Wright and Nicholas Collett have been collaborating since 2016, when they won a Best of Kansas City Award and the Best of Venue at Kansas City Fringe for the solo show Crazy Horse: A Dream of Thunder.

“The first draft was about 68 pages, which would translate to a three and a half hour one-man show,” Wright says.

They’ve been working online for the past two years to develop the folk musical Prejudice & Pride based on Jane Austen’s 1813 novel.

The suggestion to write a country western version of Pride and Prejudice came from Collett’s wife. The idea partly appealed to Wright because he had recently begun learning to play the banjo.

This casual hobby turned into a composition of 15 original songs by Wright and developed with KC folk band Gullywasher.

“Synchronicity is everything,” Collett says.

“We started with the music,” Wright explains. “So I just kind of mapped it out, like ‘What are the major points of the show? And how could a song tell that part of the story?’ Then we looked at the songs and said, ‘Okay, how much weight of the song is lifting? How much storytelling work is this doing? Where do we need additional scenes to make the story flow?’ It made the songs essential to the storytelling.”

Longborn and his brothers are pressured to marry rich before they lose their family farm in East Tennessee. When wealthy singer Fitzwilliams comes to town, conflict—and eventually romance—sparks between the two.

Everyone in the show has multiple roles to cover, but especially Wright and Collett. Set design, promotion and marketing, lighting design, and casting were all completed by the duo. Wright also plays Longborn, the protagonist.

“I’ve been working here for almost 20 years,” Wright says. “And so I’ve gotten to know a lot of theatres, a lot of other actors in town. I sing the praises of Kansas City theater everywhere I go, because of the amazing talent pool and the quality people who congregate here. So when I knew I was gonna put up the staged reading, I started tapping people.”

Prejudice & Pride has been awarded the 2022 Artist Residency at Musical Theater Heritage as well as the 2022 ArtsKC Inspiration Grant. It has also received a highly favorable review from the Jane Austen Society of North America, which comments on the musical’s “joie de vivre.”

The show will be performed Thursday through Saturday at Musical Theater Heritage at Crown Center July 8-24, beginning at 8 p.m. with a two-hour run time. Tickets run $20 to $30.

The entire Kansas City-based cast will travel to Scotland to perform at the Edinburgh Fringe Aug. 5-27.