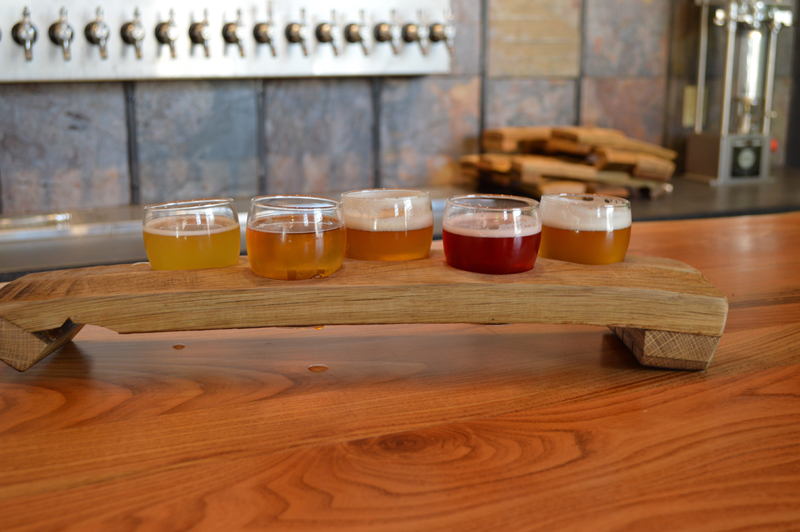 Grandma’s fridge is gone, and the mismatched tables will go back to bingo halls or Rotary clubs or wherever mismatched tables retire. Crane Brewing Company is gearing up to open its permanent taproom on Friday, November 25.

“We always wanted a spot where people who enjoy our beer can come to the source and meet us,” says Crane vice president Chris Meyers.

“Our goal is to create a space that people can call home in Raytown,” taproom manager Brett Main says. “There’s nothing quite like this here.”

Mike’s Wine and Spirits has added 32- and 64-ounce growlers at its three stores. The Brookside location now has 10 taps, and the Waldo and Westport stores have eight apiece. The well-curated selection includes a mix of local brews and some choice out-of-market options. The Brookside taps recently featured Crooked Stave’s St. Bretta, Grimm Super Going, and Firestone Walker Luponic Distortion.

Keep an eye out for One Eyed Jaques, a Belgian-style imperial stout that is the latest in Tallgrass Brewing Company’s Explorer Series.

Martin City Brewing Company’s Monk in Scotland, a Belgian-style quadrupel aged in Scotch barrels, is out in the wild this week.

Repeat after me: Apple is not just for pies. Near the end of this month, Green Room Burgers & Beer (4010 Pennsylvania) releases Papa Louie’s Apple Cinnamon Wit. In the interim, don’t forget about their daily lunch deal: any burger, a side (you know you’ll get fries) and a draft beer for $12.

Dogfish Head Craft Brewery is looking for a regional sales manager for Kansas and Missouri. I’ve got a call in, but that means at some point likely in the near future, you’re looking at Dogfish Head brews arriving in the area.

Double Shift Brewing Company (412 East 18th Street) is launching an Industry Night. If you have a liquor card, come in for 25 percent off beers from 4 to 10 p.m. every Thursday.

You don’t have to wave a wand for butter beer to appear. Colony Espresso & Beer (312 Armour Road, North Kansas City) will be serving alcoholic and non-alcoholic butter beer in honor of J.K. Rowling’s latest, Fantastic Beasts and Where to Find Them. The magical elixir — made with sweetened condensed milk, butterscotch, whipped butter and cream soda, with an alcoholic iteration also featuring Root Sellers’ Hard Cream Soda — flows from 6:30 to 10 p.m.

Martin City Brewing Company holds a tasting at Gomer’s Midtown (3838 Broadway) from 4 to 7 p.m. with its Hardway, Blond, Saison, Abbey, Apposite and Highwayman.

Boulevard Brewing Company is throwing the parent of all pub crawls downtown. The Class of ’89 Pub Crawl, from 1 to 7 p.m., stops at Alamo Drafthouse, Anton’s, the Brick, the Dubliner, Flying Saucer Draught Emporium, Johnny’s Tavern, Ruins Pub, Tapcade, and Up-Down. Tickets, which include a T-shirt and passport, are $15 on Eventbrite. The proceeds from the event benefit Cultivate Kansas City.

Get in the winter spirit with the return of Margaret, a winter seasonal from Red Crow Brewing Company (20561 South Lone Elm Road, Spring Hill). The old ale winter warmer (7.8 percent ABV, 30 IBUs) is reminiscent of a light wee heavy and drops today.

Martin City Brewing Co. is sampling its can lineup at Metcalf Liquor (7527 Metcalf, Overland Park) from 3 to 5 p.m.

The next bottle in Border Brewing Company’s We Brew for You series — in which drinkers get to vote what they’d like to see the Crossroads brewery make next — is a Pecan Brown Ale. Bottles will be available in the taproom (406 East 18th Street) today.