One last time, let’s clear up a misconception about Michael Crane. The namesake of Crane Brewing Co. doesn’t dislike beer. It’s that he’s admittedly a bit of a lightweight.

“I’ve never been a big beer drinker,” Crane tells me one afternoon in the Raytown brewery’s makeshift taproom. “It’s not because I don’t like it. It’s because, even as big as I am, it doesn’t take much alcohol to affect me.”

Now, there is a four-letter food beginning with B-E-E that he really does avoid: beets. Which is a little surprising, given that beets helped make Crane a medal collector on the homebrewing circuit.

The first taste of Beet Weiss Berliner Weisse since Crane went pro will come Saturday, September 17, at the Festival of the Lost Township at 62nd and Raytown Road in Raytown. (The next week, Beet Weiss is slated to be in liquor stores.)

“For the past two years, we have been asked almost daily if we were going to be making the beet beer,” Crane says. “Well, we are.”

Crane first brewed the beer in 2012, when he was a homebrewer making 15-gallon batches on weekends and playing with his creations in secondary fermentation. He still remembers the accidental creation of his beet beer. The story goes that Crane saw his vegetarian son, Joey, cooking in the kitchen and asked what he was making. “Beets,” Joey answered, before asking his own question: “Hey, Dad, why don’t you put beets in beer?”

Crane, who was making a cream ale at the time, took the suggestion to heart and went grocery shopping.

“I’d never eaten beets,” he says. “I’ve never liked them. So I washed them off, I sliced them, boiled them for 15 minutes, dumped them in a bucket, racked the beer on top of it.”

That didn’t stop Crane from entering his cream ale — with beets — into a homebrewing competition. But perhaps it should have. One judge told Crane that he’d give the beer, with its magenta color, 10 points for appearance if he could (appearance was worth no more than three points). “But,” the judge added, “it’s still undrinkable.”

The beer did taste like dirt … because Crane had failed to peel the beets. He didn’t realize that beets need to be peeled until his son prepped some for a beet Berliner Weisse.

“I’ve been wanting to do it all along, but all of the smarter guys were saying wait until the fall,” Crane says of his five partners. “We had done some testing and found out that the beets were better this time of year anyway.”

And this version of the Beet Weiss is a little different from the original.

“It’s not the same beer that we made as homebrewers,” says Chris Meyers. “We’ve changed the recipe. We used different yeast fermented and our lacto culture is different. But what inspired us with that beer is very similar. It’s still going to be earthy and tart.

“Not everybody likes beets,” Meyers continues. “I find more people enjoy the beet beer than would enjoy eating them otherwise. Something about the tartness cuts through a lot of the earthiness that’s in beets. And there’s so much sugar in beets that when it does ferment, it kind of adds a cherry, berry quality to it. And the color is gorgeous. It’s still that rich, pink-hued magenta color.”

Meyers says Beet Weiss could become a fall seasonal for the brewery, possibly launched every year at a festival. 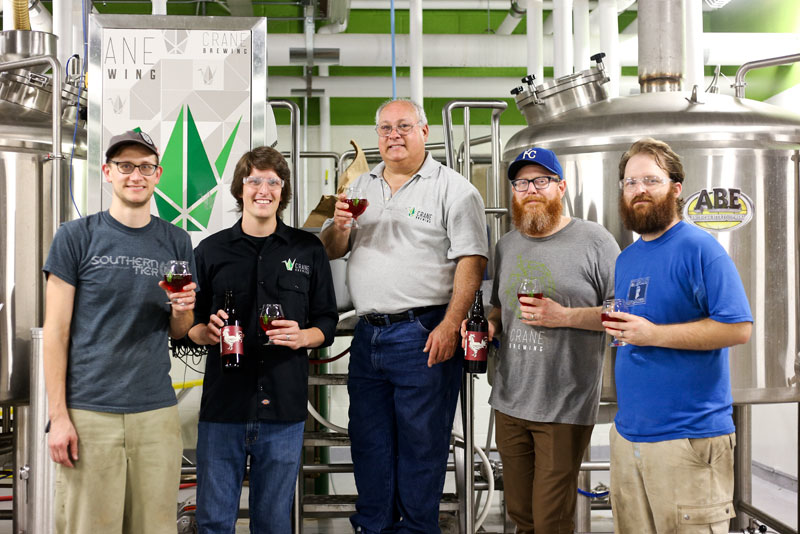 What’s next for Crane Brewing? A big transition. Head brewer Steve Hood has left for the Bay Area in California.

“We are sorry to leave our family, friends and the Midwest, where we have made our home for most of our lives, but we see great opportunities in our future,” Hood wrote in a e-mail. “I wish the best of luck to the rest of Crane Brewing. I am very proud of what the group has accomplished so far and feel lucky to have taken part in its beginning. I see no limit to what this team can achieve in the future. I want to thank the entire brewing community for teaching me so much about the art of brewing and the value of cooperation. And, finally, I want to thank all the drinkers out there who believed we could start a brewery with a focus on such wild beers. This city will always feel like home to me.”

“We are very sad to lose Steve at Crane Brewing,” Meyers says. “It has been a great experience having him as a brewer and friend.  We wish him and his family all the best on their new adventure. We know he will find a new home in the California brewing community, continuing to produce amazing beers.”

Taking over for Hood as head brewer is Randy Strange. Crane has also hired Michael Reynolds as a brewer.

“We have known Michael for years as a member of the Kansas City Bier Meisters,” Meyers says. “He has focused on brewing sour and wild fermented beers for some time, and comes with a great deal of brewing knowledge. His incredible palate and sensory analysis skills will benefit our developing beers and barrel program. This is his first professional brewing experience, but with his understanding of brewing techniques and having Randy to teach him, we are excited for what our brewery has in store.”

Also on the way: The opening of Crane’s official tasting room later this year. The tasting room will feature 12 taps and a Crowler machine for 32-ounce to-go cans. And this won’t be Crane’s only dance with aluminum.

“We’d like to go to canning,” Meyer says. “With canning, there’s a lower margin, and obviously the hope is that once it’s in a better package, more of it will move. We just want to do it the right way. Just being in the Midwest — tailgating, camping, floating, all of that stuff — we’d like to be in cans. We’re just not sure how we do that yet.”

Crane is also looking at its distribution footprint.

“We’ve always said we want to stay pretty regional,” Meyers says. “Ten to 15 years from now, we kind of want to stay between Chicago and Denver. The beer styles that we do are from farmers, laborers from Europe, so they lend themselves to the Midwest culture.”

Meanwhile, the second year of the Festival of the Lost Township looks to be a nod to Crane Brewing’s home-brewed roots, with homebrewing contest Brewtopia joining this year’s fest. (The winner in the farmhouse category will see his or her creation upscaled on Crane’s system and served in the brewery’s tasting room.)

This year’s brewery invitational includes several from Missouri that Kansas Citians may not have had tried yet, including Mark Twain, Narrow Gauge and Piney River, and out-of-state breweries such as Toolbox and Third Base.

“We wanted to have a lot of breweries from Missouri represented and supported but also invite some friends from all over the country,” Meyers says.

In addition to the Beet Weiss, Crane will pour special brews, including Treaty of Bacchus, a brett saison aged in High West barrels. “It has some wine tartness, wood character,” Meyers says of this first limited-release club beer. “It’s a really nice barrel-aged saison.”

VIP admission is at noon, followed by general admission from 1 to 5 p.m. Tickets cost $100-$35, with Brewtopia receiving $5 from each ticket and the rest going to the Raytown Kiwanis Club.