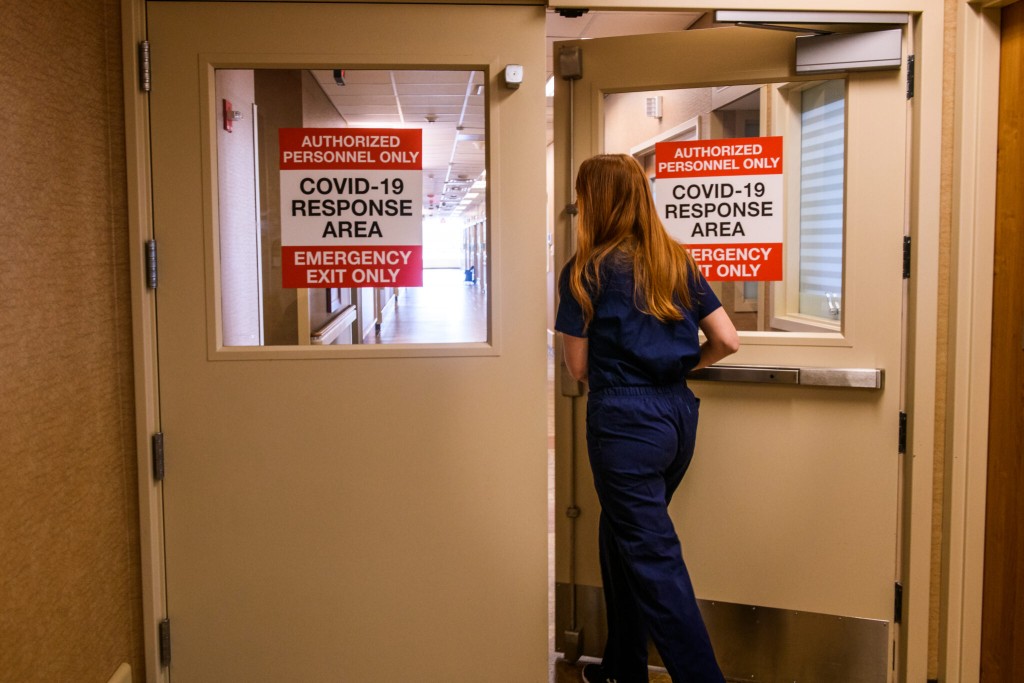 For much of October, there were so few new COVID-19 cases in Knox County, Health Director Lori Moots said she began to hope the pandemic was almost over for her constituents.

The early September Knox County Corn Festival, she said, didn’t produce the feared spike in cases. And by Oct. 8, the health department was able to report there was only one active case in the county of 3,744 people.

In the past two weeks, all that has changed.

As of Friday, there were 54 active cases, 13 more than at any point since the first infections were identified in mid-June 2020.

“Going into Halloween, I had predicted it would hopefully be out of here before indoor sports rolled around,” Moots said Tuesday, “and it just broke out at the first of November.”

Knox County is an extreme example of what has happened statewide in November.

The main culprit remains the Delta variant of the coronavirus, which hit the state in May and drove hospitalizations to near-record levels as it peaked in August.

While political battles over mask mandates remained hot, the Delta variant wave cooled. The daily average of new cases, however, remained more than double the late May low of 396 per day.

The downward trend ended in late October. So far in November, the Department of Health and Senior Services has reported 21,190 new coronavirus infections. The seven-day average of reported cases has risen from 975 per day on Oct. 31 to 1,418 per day on Wednesday, an increase of more than 45 percent.

On Friday, for the first time since Aug. 22, the daily average exceeded the rate on the same day of the previous month.

Wednesday’s rate remains less than half the Aug. 5 peak and less than one-third the pandemic peak on Nov. 20, 2020.

The state health department reports 12,423 deaths among people who had lab-confirmed cases of COVID-19, including 3,257 who died since the beginning of May.

Over the past two weeks, hospitals in the state reported a daily average of about 1,000 COVID-19 inpatients. While that is well above the late-May average of about 650, it is down about 60 percent since mid-August.

Wastewater sampling, which can identify the variants and predict whether cases will increase, shows viral spread is increasing throughout the state. The program in early May identified the arrival of the Delta variant in Branson.

“I think we are going to see a steady increase for a month or two, but probably not as bad as last year,” said Marc Johnson, professor of molecular microbiology and immunology at the University of Missouri. Johnson’s lab analyzes wastewater samples for the state.

In late June, as the Delta variant surged, Johnson accurately predicted daily cases would triple by the end of July.

The current rise in cases comes as vaccination against the coronavirus is now open to everyone over the age of 5 and booster shots are available for many people inoculated early in the year. The state report shows 50.4 percent of all Missourians have completed vaccination.

On Tuesday, the Department of Health and Senior Services issued a hotspot advisory, the first in almost a month, for seven counties in northwest Missouri. The list includes Buchanan County, home to St. Joseph, the largest city in the region.

Of those counties, six have already exceeded the case totals from October.

The increase in northwest Missouri appears to be part of a broader regional trend, the advisory states.

“Our neighboring states like Kansas, Nebraska, Iowa and Illinois all have higher case rates than Missouri as well, and many of our border counties in the northern part of the state seem to be disproportionately impacted,” Lisa Cox, spokeswoman for the state health department, wrote in an email to The Independent.

The trend in cases is up in almost all areas of the state. Over the past week, 77 of the state’s 118 local health departments showed an increase in cases over the previous week. Only 36 showed declining cases.

Samples from 73 sewage systems, tested in the first week of November, showed 16 systems with increasing levels of coronavirus particles and 11 where the load was declining. Testing last week showed 29 were increasing and only five where the virus was declining. For the remainder, the trend was uncertain.

Platte County, which is adjacent to the region identified in the advisory, has seen a 63 percent increase in cases in the past seven days compared to the previous week.

“Right now, it’s hard to have an exact cause for the increase in cases,” Aaron Smullin, spokesman for the Platte County Health Department, wrote in an email. “We don’t have any one outbreak or event in common. Our current thought is because of Halloween activities. We saw a similar increase in cases around this time last year.”

Since the end of October, almost 22 percent of new cases statewide have been among children under 18. A large proportion of the cases in Platte County are among children as well, Smullin wrote.

The demand to get children vaccinated is good, he wrote.

The pattern of increasing cases in Missouri is being seen in many states, Johnson said. The states seeing the highest rate of increase, Johnson said, are those where chilly fall weather is driving people indoors.

“When you look at the distribution across the country, what is going on right now has much more to do with your latitude than your vaccine rate,” Johnsons said. 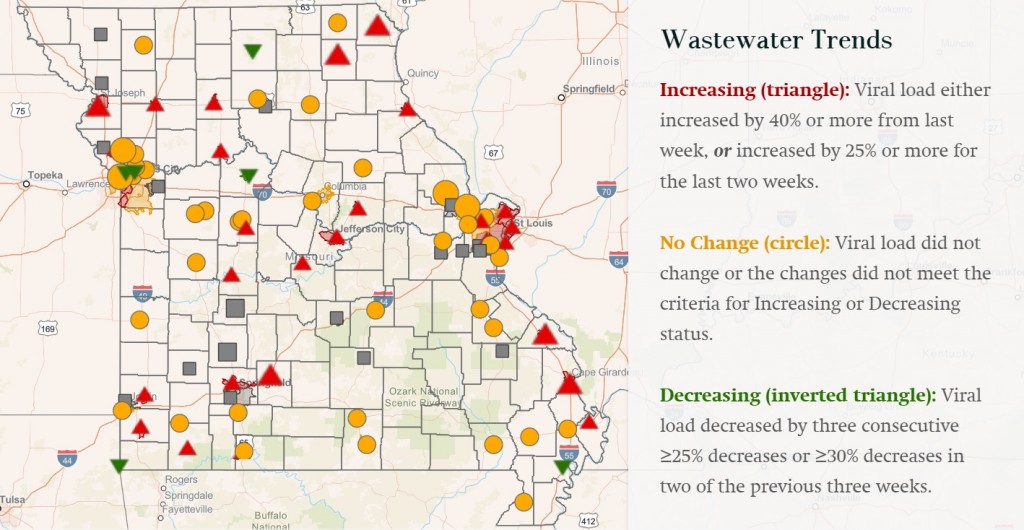 Wastewater test results posted Nov. 12 show 29 sewage systems where increasing levels of coronavirus were detected. A rapid increase in viral loads in wastewater is usually followed by a large increase in infections. // Map by Department of Health and Senior Services

The small staff at the Knox County Health Department is working as hard as it can to keep up with the crush of new cases, Moots said.

“We worked Veterans Day and we are splitting the caseload between three nurses for the contact tracing,” Moots said. “We are just doing it, hoping it is about to make its way through here and slow down.”

The 54 active cases is equal to one person out of every 75 with COVID-19. Knox County has the third-lowest population among the state’s counties.

If the same share of active cases were occurring in Boone County, with more than 180,000 people, it would be more than 2,450 active cases, or the equivalent of every infection reported since Sept. 17. The Columbia-Boone County Public Health and Human Services Department reported 334 active cases as of Tuesday afternoon.

In St. Louis County, the state’s largest population with almost 1 million people, a similar ratio of active cases would be equal to all the cases reported since Sept. 24.

Of the 68 cases Knox County has identified this month, 26 have been among children under 10. Moots said she began issuing warnings several weeks ago through her department’s Facebook page that people shouldn’t assume symptoms like a cough or sneezing was due to allergies or that illness in children, like coughing, vomiting or diarrhea, was from a cold or food-borne pathogen.

“We had some rainy weather and recesses went indoors,” Moots said. “All the meals went indoors. There were no outdoor activities for the little guys. That is where we really saw the explosion, was kindergarten through 6th grade.”

The large number of new cases Moots’ department is reporting isn’t reflected in the state health department report, which only shows 20 cases so far this month, 17 in the last two weeks.

“The 17 cases we currently have includes antigen and PCR testing, but it’s certainly possible that they have a provider in the area that is not reporting directly to DHSS as required,” Cox wrote in an email. “We are looking into it with the local public health agency.”

Moots said she was unaware of the discrepancy and has been too busy to check the state report.

The vaccination rate in Knox County is better than much of rural Missouri. The county was 51st in completed vaccinations, with 38.1 percent inoculated. But many of those are older residents of the county, Moots said.

Convincing many younger adults to get the shot is difficult.

“When it comes down to it, those people aged 16 to 46 who would be in the hot zone, they are just not going to do it,” Moots said.

The cases in children have been generally mild and monoclonal antibody treatments are readily available in the area to support adult cases, she said. The illness is not as severe, overall, as earlier in the pandemic.

She’s had personal experience with the disease in children.

“My 9-year-old was slated to get his vaccine and came down with COVID last week,” Moots said. “That has also interrupted my boosters.”