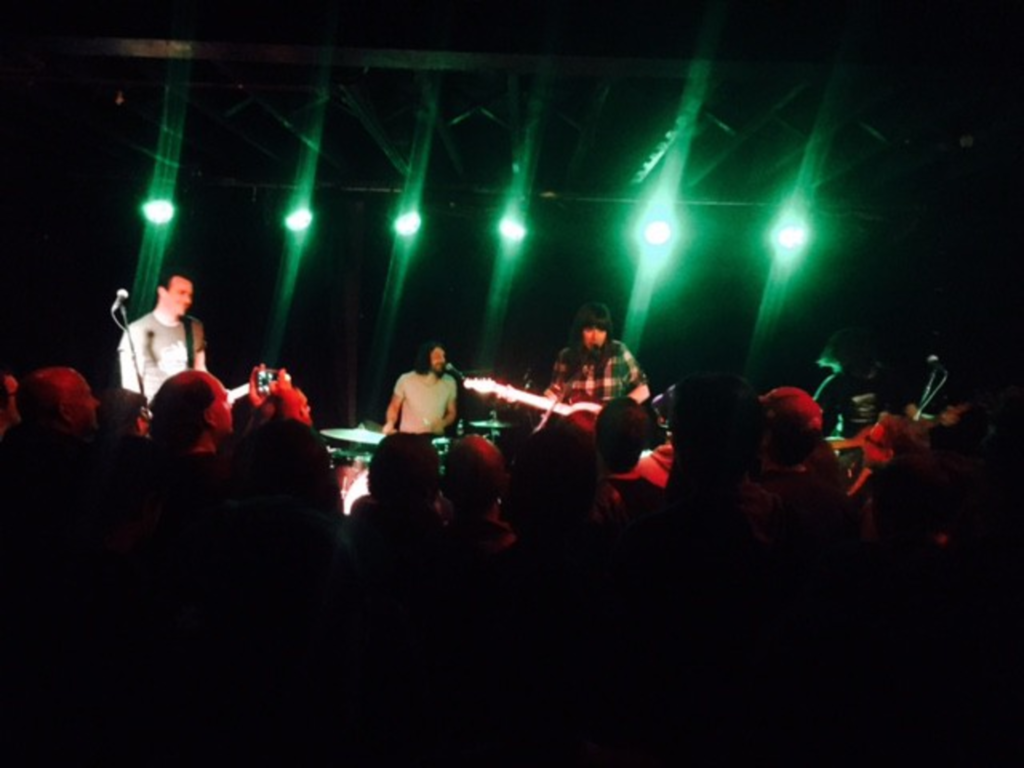 It says something about Courtney Barnett that, despite the weeknight bill and the fact that the Royals were engaged in the pivotal Game 6 of the World Series when the Australian artist took the stage, her show looked close to sold out. In any case, it was a tight fit for the crowd at the Riot Room last night for Barnett’s first stop in Kansas City – and based on the success of the evening, it surely won’t be her last.

Barnett opened the night with “David,” off 2013’s A Sea of Split Peas – the repackaged combination of her two earlier EPs, 2012’s I’ve Got a Friend Called Emily Ferris and last year’s How to Carve a Carrot into a Rose. If any of the audience had expected a chill, singer-songwriter sort of evening, Barnett’s primary goal seemed to be blasting away that expectation. “David” shotgunned the energy in the club, and a few concertgoers around me seemed to jolt awake at the song’s upbeat drums. 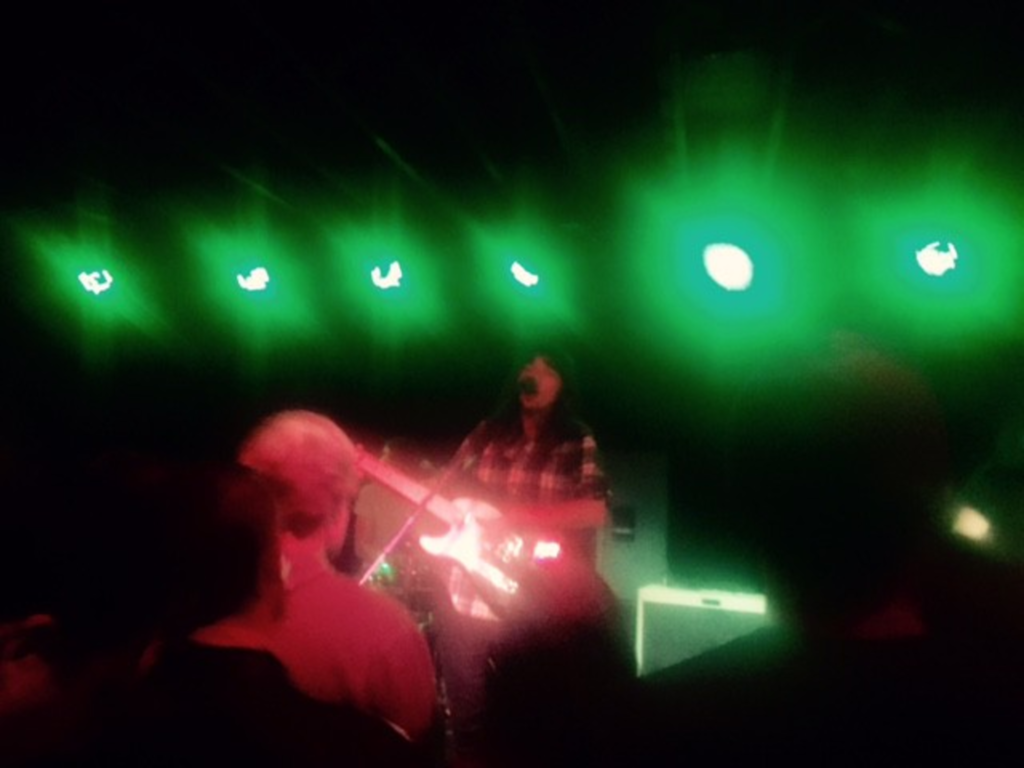 On record, A Sea of Split Peas sounds approachable – homely, even, and that’s part of Barnett’s charm (and what has made her an NPR darling). She has a way of taking the everyday and spinning an interesting, affecting narrative, as with her hit “Avant Gardener,” inspired by an asthma attack Barnett had while gardening one day. Her voice sounds a little early Sheryl Crow meets Nico, and she has that same droll tone and wry lyrical approach as the former. But live, on stage, the 26-year-old Barnett is all rock and roll. She can shred with the best of ’em, and she proved it last night.

“All right, this is a romantic song,” Barnett said a few songs in, after she’d torn through “Scotty Says.” “Let’s calm down. This is the song they played at the restaurant we were at tonight.”

And Barnett played the first opening chords of Sixpence None the Richer’s frightful “Kiss Me” before laughing, cutting it off and launching into “Don’t Apply Compression Gently.”

That was how it went for the hour-ish set: Barnett would say something kind of funny in her Aussie accent – an offbeat joke that felt like an asterisk leading to an apologetic footnote that seemed to say, Well, I think I’m clever, anyway – and then she would bend her body over her bass guitar and into a massive riff, her long brown hair falling in tangles in front of her face. Her lips would meet the microphone and her heavy-lidded eyes would shut as she sang in that I’m-not-trying-very-hard voice of hers about the 9-to-5 job she doesn’t want (“Are You Looking After Yourself”) and drunken daydreams (“History Eraser”).

Just before delivering “Avant Gardener,” someone in the crowd alerted Barnett to the two underage girls that were huddled outside the Riot Room, watching the concert excitedly from the windows.

“Aw, what should we say to them?” Barnett asked, and moments later, the 1-2-3 cheer of “Get older!” was shouted through the glass at the young fans. “Can they come in for just the last two songs?” Barnett inquired from the stage. Riot Room officials obliged, and the eager girls beamed inside. Barnett welcomed them with a friendly, “Hey, young people!” 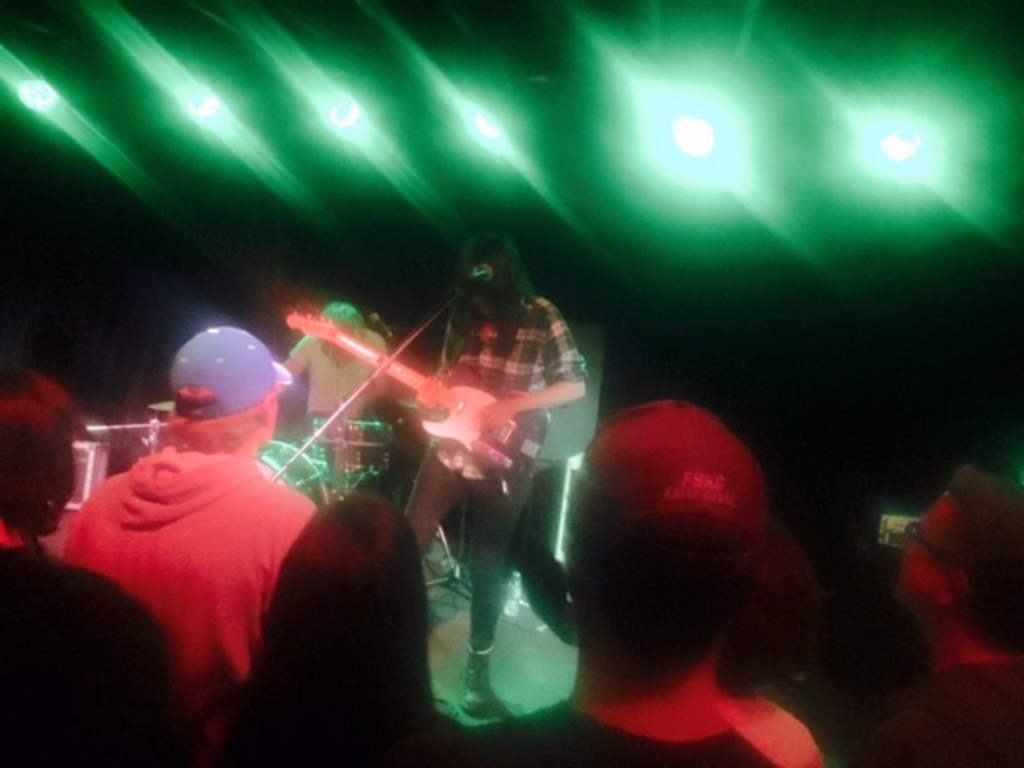 The final song of the evening was “History Eraser,” and just before launching into it, Barnett inquired about the status of the game.

“We’ve won? We’ve won!” she confirmed excitedly, and she joined the cheers from the crowd. It was a beautiful little moment, this KC newbie sharing something as magical as the Royals advancing to the final game in the World Series; you could practically feel the audience-artist bond turn platinum. A guy in front let Barnett borrow his Royals cap for the last song, and she placed it atop the head of one of her guitarists as the band barreled through its last track. The atmosphere was a celebratory high, and when Barnett left the stage – with no encore to follow – she left a jubilant crowd behind her.

Leftovers: I was watching the Royals game when opener Mikhael Paskalev took the stage, but concertgoers more diligent than I have said that he was well worth the effort. I don’t doubt it. His video for “I Spy” is an old favorite, and I can only hope he swings through town again soon.

Setlist (assembled as best as I could; please leave corrections in the comments):
David
Lance Jr
Canned Tomatoes (Whole)
Scotty Says
Don’t Apply Compression Gently
Out of the Woodwork
Anonymous Club
Are You Looking After Yourself?
No One Really Cares If You Don’t Go to the Party
Pedestrian at Best
Avant Gardener
History Eraser