Could a trip on the Missouri River strengthen our connection to it? 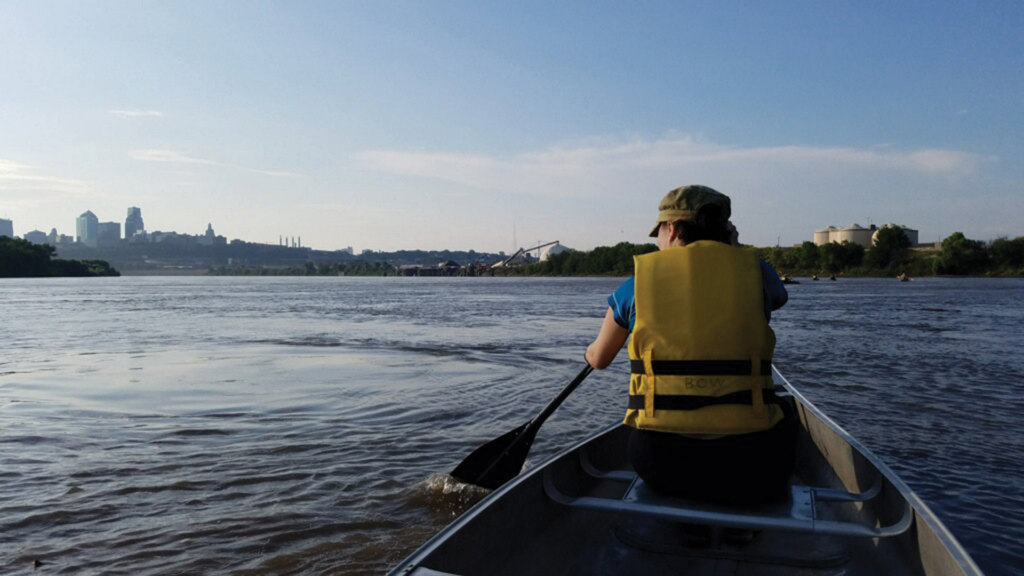 The nearly full moon is rusty orange, its brightness fading, and the only thing I can see looking out toward the Missouri River is a lap of waves and the occasional bounce of a flashlight or headlamp.

It’s 6 a.m. on a late-August Saturday, and about 30 of us have gathered at Platte Landing, in Parkville, canoes and kayaks in tow. We’re the first group of the day who will head out on the Missouri, part of a program overseen by the Missouri Department of Conservation.

Despite having lived in five different Missouri towns, all of which were within one hour’s drive of the Missouri River, I realize suddenly that I’ve never actually been in its waters. We lift our metal canoe and walk the down the ramp. Our steps become slippery and we clamber into our seats. Paddles penetrate mud smearing the concrete. Sliding down into the murky water we point the boat’s front east and head toward the pinkening dawn.

It’s been two years since Burr Oaks Nature Center manager Lisa LaCombe began offering these river trips as of MDC’s education programming. LaCombe says when she first took the naturalist post in suburban Kansas City she envied those who worked in other parts of the state, like the Ozarks, with its access to all those streams and rivers.

Then she read about the MR 340, an annual kayak and canoe race that runs from Kansas City to St. Louis. She signed up in 2015.

“When you spend 340 miles on the river, with little sleep, you see the river in so many different lights, and in ways that you wouldn’t know if you weren’t out there,” LaCombe says. “It gets really smooth on the water, and in the morning there is fog, and paddling under a full moon has its own beauty.”

In 2016, LaCombe enlisted some volunteers and started offering to the public a variety of river trips: one during the day, one at sunset, a moonlight float, a fall color trip, even an overnight with camping at Fort Osage. By 2017, a few of these trips filled up so fast LaCombe had to institute waiting lists. This year, on the July morning when LaCombe’s office began offering sign-ups (you do it by phone) for my August 25 float, it took only 90 minutes to fill the 96 spots. By week’s end, more than 300 people had asked to sign up. LaCombe’s office had to turn the 200 others away.

After I made reservations for the sunrise float, I agreed to attend an orientation meeting. Initially, I intended to try a solo kayak. But then I thought about the Steamboat Arabia Museum at the City market, the exhibit featuring a steamboat swallowed by the Missouri and sent to its cornfield grave. Scary stuff. I decided to cajole my adventurous friend, Alexis Webb Bechtold, who had floated the river before, into joining me in my canoe. 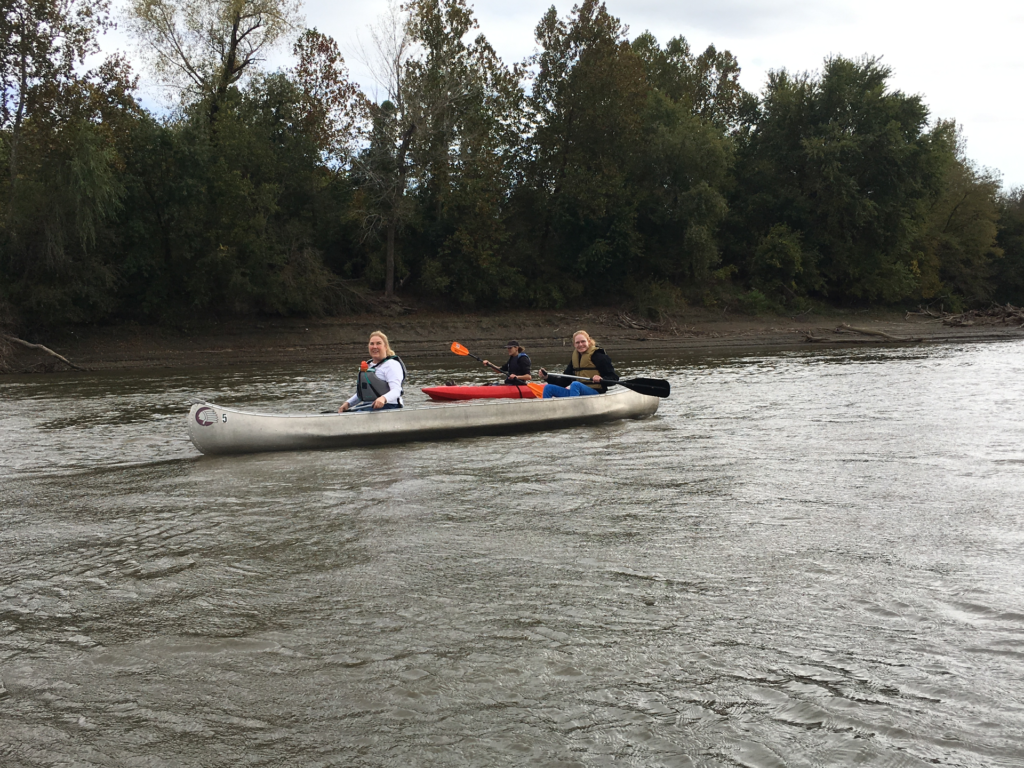 It’s easy to drown in cliche and metaphor when speaking about rivers. They signal journeys, barriers, conduits. Rivers mean life, survival, food, ritual. Believers bathe in ceremonies and honor cremation ghats along the Ganges. Joseph Conrad’s words shroud the Congo. A myriad of animals and plants spring from the Amazon and its basin. In these images the rivers run free, unshackled from dams. The people who live near them fish and navigate through the water. They build villages and farms in harmony with the floodplain.

While preparing this piece, I scanned river playlists and reserved library books with any mention of “Missouri River” in the description or title. I asked friends on social media for recommendations and received responses from many people I hadn’t heard from in years. They had strong opinions, new perspectives. River talk connected us.

When discussing, or reading about, the Missouri River, you often encounter words like “wild” and “untamed.” A Guide to Canoeing the Missouri River (1999) notes that if you “want a wild roller-coaster ride down a river jammed with snags, logs floating like torpedoes … canoe the Missouri.”

The river has changed much since Lewis and Clark first noted that its “barbed seed” penetrated their “mockersons and leather legings,” giving them “great pain.” The Missouri — 2,340 miles from Three Forks, Montana, to St. Louis, the longest river in North America — owes its current disposition to bureaucrats.

In the early 20th century, federal government officials decided it was time to subdue this flood-prone hydro-beast in the interest of farming and economic development. It used levees and dams as a means of control. The Flood Control Act of 1944 established the Pick-Sloan program, intended to bring benefits via flood control, power generation, and irrigation. It also eventually displaced many Native Americans when Oahe Dam flooded Standing Rock and Cheyenne River reservations.

Today, the Army Corp of Engineers manages the Missouri. Changing the river’s natural course has dramatically altered the surrounding wildlife ecosystems. In recent years, legal challenges have pitted environmentalists seeking to maintain natural habitats against property owners and farmers in floodplains. But, as demonstrated by the Great Flood of 1993 — 50 deaths, $15 billion in damages — nature often wins.

Kansas City owes its existence to the Missouri (and Kansas) Rivers, but most of us, of course, don’t think of them as destinations. That’s slowly changing, though. Organizations like Port KC have become more active in working with area mayors and economic development teams to turn attention to the waterfront. Developers and financiers are getting more comfortable with the idea, says Joe Perry, vice president of real estate and development for Port KC.

“We’ve turned that corner, and I think the perception has changed,” Perry says.

He mentions area trail planning and regional transit system goals as signs that a focus on river access might grow similarly. The Town of Kansas Bridge north of City Market, the ASB underpass, English Landing Park in Parkville, the River Heritage Trail, Berkley Riverfront Park, and the Weston Bend State Park trail and overlook come to mind, for brushes with, or walks near, the river.

“All of these are fantastic ways to engage [with the Missouri],” Perry says, “but to get on the river is the ultimate experience.”

At an orientation before the trip we’d been informed that the total distance from Platte Landing to our destination of Kaw Point is about 8 miles. It will take us an hour and half to 2 hours. Unlike on a smaller Ozark rivers known for Missouri floating, we won’t have to dodge as many obstacles, we’re told. Mostly logs and wing dikes. If we encounter a barge, move to the other side of the river and let it go by. And watch out for Asian carp — they’re startled by boats and might jump into your canoe. Our gentle trip took us that morning where the river wanted us to go. As the Kansas City skyline came into view, we fought a headwind and added some power to our strokes to keep us on track. The sun was shining brightly now. Then Kaw Point — the confluence of the Missouri and Kansas Rivers — was visible in the distance. Signs, including Lewis and Clark’s silhouettes, greeted us. I’ve read their journals, but their voices escape me. Instead I hear harmonica, Rhiannon Giddens, Lykke Li, Tina Turner. I hear the last line of a Tech N9ne song: no funeral, just throw my ashes in the Missouri River. Out here, it is unavoidable: the river looks different. It won’t ever be the same to me.

“If you help people fall in love with a natural resource, it is easy to get them to care for the natural resource,” LaCombe had told me before the trip. “If [by floating on it], you are part of it, my hope is that you become a spokesperson and stewards of that big, beautiful river.”