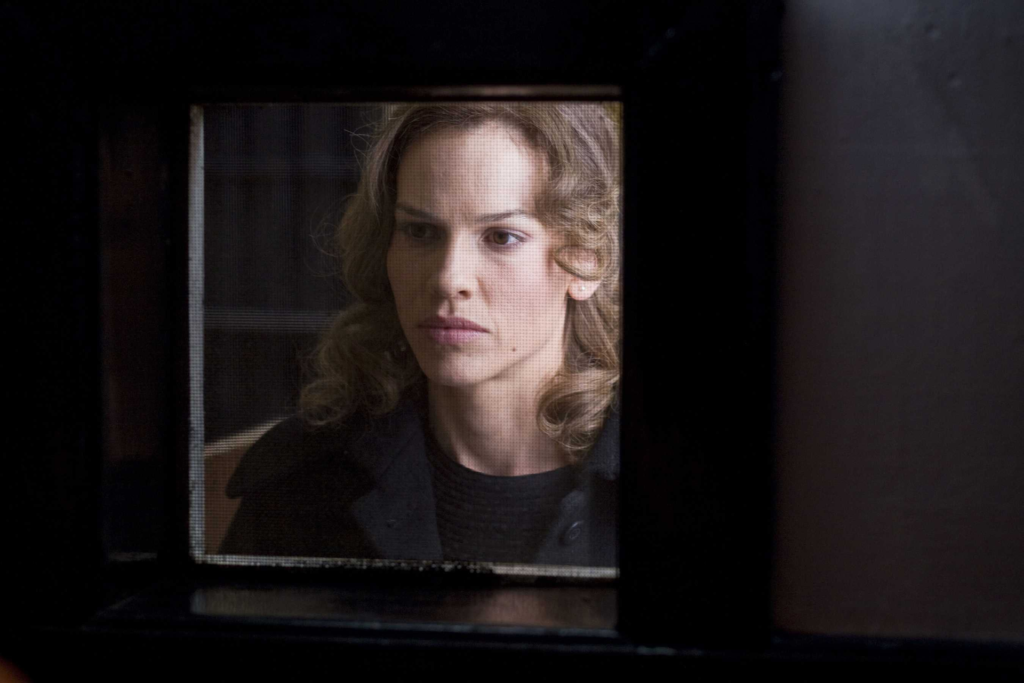 Fox Searchlight’s Amelia flamed out spectacularly last October, but the studio is trying again to grab awards-season honors with another biopic starring and executive-produced by Hilary Swank. Gone are Amelia‘s patrician enunciation and smartly tailored Depression-era trousers. As Conviction‘s Betty Anne Waters, a Massachusetts high school dropout and single mom who put herself through law school to exonerate her brother, Kenny, wrongfully imprisoned for murder, Swank dutifully returns to the working class, the caste of her past Oscar glory for Boys Don’t Cry (1999) and Million Dollar Baby (2004).

Director Tony Goldwyn and writer Pamela Gray, previous collaborators on 1999’s A Walk on the Moon, skip over most of the specifics of Waters’ extraordinary accomplishment — the GED is mentioned in one scene, and she’s practically sharpening pencils for the bar exam in the next — to insert superfluous heart-tugging childhood flashbacks. The pint-size Betty Anne and Kenny (Bailee Madison, the adorable dumpling from last year’s Brothers, and Tobias Campbell), two of nine children sired by seven different fathers, are trotted out once too often to establish the origins of the unbreakable sibling bond. Mom Waters (Karen Young), distracted by man problems, pays no attention to the tykes, whose playtime includes breaking and entering the trailer home of a nearby German woman. As foster-home separation looms, tiny limbs flail, and brother and sister promise to be there for each other always.

The meagerly furnished residence that was once Betty Anne and Kenny’s romper room becomes, in 1980, a gory crime scene. Neighbor Katharina Brow is found — in the words of the crooked cop (Melissa Leo) who arrests adult hell-raiser Kenny (Sam Rockwell) for the murder — “stabbed 30 times and her head bashed in until her brains fell out.” The perjury of two of Kenny’s ex-girlfriends (Clea DuVall and Juliette Lewis, reveling in snaggle-toothed, trailer-trash high camp) sends him to the clink for life in 1983. Accordingly, the movie sends Rockwell — usually a loose, pleasingly unpredictable presence onscreen — to actors’ detention camp, forcing him to endure stagy prison-visit scenes opposite Swank.

“I will never accept it!” Betty Anne declares. And so she devotes the next 18 years to proving her brother’s innocence. Instead of looking closely at Waters’ enormous sacrifices and the toll of her commitment — perfunctorily depicted as falling asleep on her keyboard while writing her torts paper and remaining in her Cape Cod chip–covered bed for several days after her sons decide they’d rather live with their dad — Conviction presents its heroine as a construct of uncomplicated altruism and determination. She is, in other words, the perfect role for Swank, whose robotic eagerness to please and perfect regional accents have made her the Stepford Wife of the fall-movie season.

Swank’s inauthentic pantomime of blue-collar grit becomes even more glaring in her scenes with supporting player Minnie Driver as Abra, a classmate of Betty Anne’s at the Roger Williams University School of Law. Spotting Betty Anne working behind the bar one night, Abra aggressively insists they become friends. Driver conveys her character’s weirdly touching mix of pushiness and loyalty with a relaxed sense of humor. But as the script calls for the two women to work together to clear Kenny — a project that begins when Betty Anne first hears the term “DNA test” — Driver, like Rockwell, gets sacrificed to the lead’s bid for Indefatigable Heroine Greatness.

In all fairness, Swank’s unsubtle performance is often an extension of the bluntly dumb lines she and the other cast members must deliver. Around the time when a dazed Peter Gallagher shows up as Barry Scheck to leave stern phone messages for then-D.A. Martha Coakley, who ignored the DNA evidence, the failures of the U.S. justice system are expressed as a fridge-magnet maxim: “People don’t like to admit when they’ve been wrong.”

Similarly, Conviction, its end title cards informing viewers of Betty Anne’s current activities, refuses to acknowledge the unbearable tragedy of Kenny Waters. Finally released from prison in March 2001, he died six months later after he fractured his skull in a fall. The deliberate withholding of this information doesn’t make Swank’s plastic performance any nobler. It only patronizes the amazing real-life woman she plays and the complexities of her story.