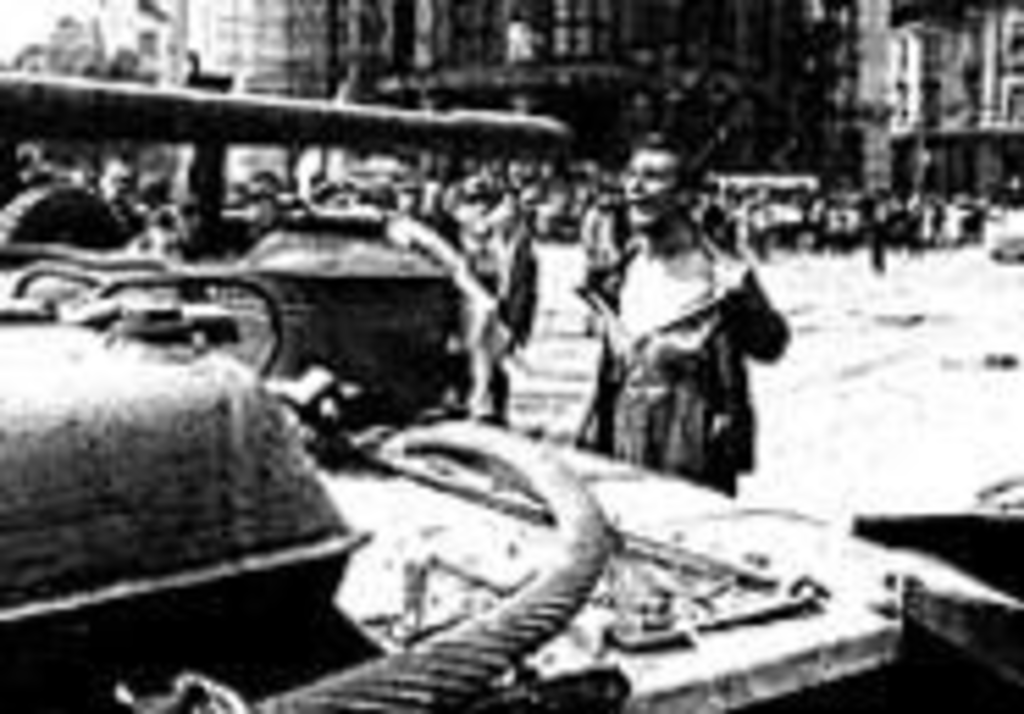 In 1968, popular uprising was the thing to do. One of that year’s least understood was the Czech resistance to the Soviet occupation of Prague. The new leader of Czechoslovakia’s Communist Party was unbuttoning the government’s top buttons, relaxing it just enough to allow more freedom in the arts and such. But the party’s older, more conservative element, unhappy about signs of rebellion and democracy, asked the Soviet Union to send over some tanks — supposedly in celebration of the country’s liberation after World War II. Thus, the Czech people learned never to look a gift tank in the mouth. Journalist Ladislav Bielik‘s giant contact sheets documenting the event are on display at the Arts Incubator (115 West 18th Street, 816-916-8970). Maybe we’re bad people for noticing that the rebels had great clothes and sunglasses, but in the majority of these photographs, they’re smiling, lighting cigarettes and walking briskly. It looks like a party, only with a tank here, a gun there. But then you look toward the west gallery wall and see the image that won a World Press Photo award in 1969: an image of a man who, in his desperation, used his own body to halt a tank. And looking at his face, you remember that this is more than an Eastern Bloc version of our Mardi Gras parade.— Gina Kaufmann

At the ripe old age of 25, Kylie Glover of Lawrence has reached the point where it’s “no big deal” that she has a gay dad. It would have been easier to get to there, though, if she’d had a support group like COLAGE (Children of Lesbians and Gays Everywhere), which has branches across the country. Such a group would have helped her, she says, “to be able to feel normal.”

Kansas City has no COLAGE chapter, but the Lesbian and Gay Community Center (207 Westport Road) hosts a meeting at 10 a.m. Saturday to gauge interest in forming one. “We’ve had a number of people call in to see if there’s such a support group, just to help kids understand the kidding and ribbing they get,” says Carol von Ott, director of community services at the center. Call 816-931-4420 for more information.— Steve Walker

Though rumor has it that people still read in public libraries, we’re excited about watching movies there — specifically the free, family-friendly fantasy films at 3 p.m. every Wednesday in March at the Kansas City, Kansas, Public Library’s Main Branch (625 Minnesota Avenue). This week’s offering is 1986’s Labyrinth, starring a young Jennifer Connelly as Sarah and an eerily ageless David Bowie as Jareth the Goblin King in a magical, musical tale about what might go wrong if one heedlessly wishes misfortune on one’s little brother. Set designs based on the work of M.C. Escher offer an opportunity for educational conversation on the way home. And grown-ups are sure to get a snicker out of seeing Bowie in eye makeup and spandex again. Call 913-551-3280 for details.
— Kelly Sue DeConnick

Unicorns and robots attract a certain audience. Hallucinatory wanderings through the jungles of the Vietnam War attract another. Elizabeth Ann Scarborough, who was born in Kansas City, Kansas, has united these diverse factions with her two dozen sci-fi and fantasy novels. At 2 p.m. Sunday, she receives the Edgar Wolfe Literary Award at the West Wyandotte Library (1737 North 82nd Street in Kansas City, Kansas). Come root for the hometown girl made good. Call 913-596-5800.— Christopher Sebela