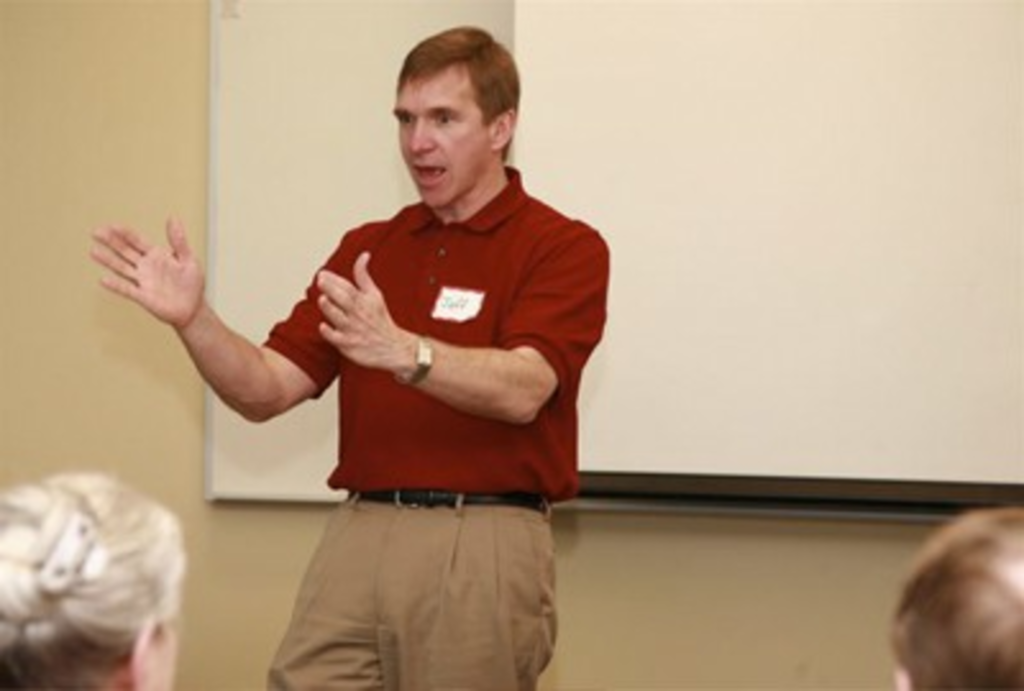 The teachers have become students, and today they are learning about the devastating consequences of sex.

Jeff Friedel, a professional chastity educator, is explaining to middle-school teachers that teenage girls who are sexually active are three times more likely to be depressed than girls who are not. Moments later, Friedel shows an image of a chlamydia-infected cervix.

Friedel works for Choosing the Best, an Atlanta company that designs abstinence programs. He has come to the Clay County Public Health Center in Liberty to train teachers from public schools in North Kansas City, Excelsior Springs and St. Louis. “Abstinence education is working!” exclaims one of his PowerPoint slides.

This morning’s lesson is designed for eighth-graders. The workbook tells the story of Kendra, a high-school student who feels ashamed after having sex with a boy. The encounter leaves Kendra feeling so confused and empty that she misses two days of school.

As Kendra’s story unfolds, Kathleen Welton, a Clay County health official, passes out hearts made of construction paper. She tells each teacher in the room to tear a piece from the paper heart every time Kendra expresses remorse. Later, their students will repeat the exercise.

Friedel, who is wearing khakis and a cranberry-colored knit shirt, encourages the teachers to stick to the script in the lesson plan. “Everything is in there for a reason,” he says.

Choosing the Best teaches that abstinence is cool and that sex outside of marriage leads to guilt, depression and biological calamity. To help provide armor against these scourges, the company’s workbooks contain forms whereby students can pledge their sexual virtue to future spouses.

The federal government has helped students make these abstinence pledges. Every year since 1996, the U.S. Department of Health and Human Services has distributed $50 million for teaching premarital abstinence. More funds became available after George W. Bush, a supporter of abstinence education, took office.

More and more states are questioning the effectiveness of the message, however, and are passing up the money. (California is the only state that has declined the money over the life of the program.) Colorado stopped participating in one of the federal programs in 2007. “Why would we spend tax dollars on something that doesn’t work?” Colorado’s chief medical officer asked.

A list of the states that continue to teach abstinence until marriage looks similar to the map of red states, where voters are more likely to ascribe importance to “moral values.”

What happens when the behavior doesn’t match the lesson plan? A professor at the University of Missouri-Kansas City is co-writing a book that attempts to come up with an answer.

June Carbone teaches family law at UMKC. One of her interests is how the law reacts to advances in medicine, such as fertility treatments. She followed the case of a sperm donor whose quest for parental rights made it to the Kansas Supreme Court. The judges ruled that the man lacked standing without a written agreement with the birth mother.

Carbone’s interest in red states and blue states began when she and a colleague, Naomi Cahn, a professor at George Washington University in Washington, D.C., set out one day to find a new research topic. They eventually settled on age as it relates to family formation. Carbone says parents who start families in their teens or early 20s lead different (that is, harder) lives than people who delay having children.

The 2004 presidential campaign was going on while Carbone and Cahn began their research. So-called values voters gave Bush his winning margin. But his critics took pleasure in noting the teen births and failed marriages streaming out of red-state America.

People in red states do look pretty silly moralizing on same-sex marriage and other topics. According to one survey, evangelical Protestants begin having sex at the average age of 16.3, just a few months after the typical nonreligious teen becomes active (15.9). “They’re having sex as much as anybody else,” Carbone says.

But hypocrisy isn’t the only factor at work.

Carbone and Cahn have noticed that red states and blue states congregate at opposite ends of the spectrum in terms of the average age at first marriage. The youngest brides and grooms live in Utah, Oklahoma, Idaho, Arkansas and Kentucky — all red states.

Families form at earlier ages in red states partly because an unintended pregnancy is more likely to be met with marriage than an abortion. (Blue states have higher abortion rates.) Opponents of abortion rights cheer decisions to take unexpected pregnancies to term. But shotgun marriages frequently end in divorce.

According to Carbone, Bristol Palin’s pregnancy provides a window into the lives of red-state families. Palin, the daughter of Alaska governor and former vice-presidential candidate Sarah Palin, gave birth to a boy in December. She and the baby’s father, Levi Johnston, are now 18.

“Think about what they’re going to be like if they have two kids, which is predictable within the next four years, and he’s, let’s say, 21,” Carbone says. “What’s he doing? Your average 21-year-old guy, even if he’s married and has kids, is not fully employed. He’s going out drinking with the boys. He’s much more likely to be unfaithful. He’s not so attentive to the wife’s emotional needs.”

Carbone says it’s likely that Bristol Palin won’t put up with this kind of behavior.

“In another era, if he was bringing home enough money, she’d be stuck with him,” Carbone says. “There’d be this huge societal support that says, You get pregnant, you get married. You get married, you stay married. You can’t leave.”

But the supports that used to keep such marriages together, such as good-paying jobs for those with a high-school education or less are disappearing, Carbone says, making divorce common.

The supposedly wicked blue states, meanwhile, are very “pro-family” by some markers. The states with the lowest rates of divorce, for instance, are Massachusetts, Pennsylvania, North Dakota, Illinois and Connecticut.

Carbone says blue states have designed a new family culture to fit the times. In blue states, marriage and childbearing are more often put off until people reach emotional maturity and financial security.

Couples who delay parenthood generally don’t need to be coerced to stay together. “I mean, let’s face it, people in their mid-30s with two young kids aren’t busy running around,” Carbone says.

Teens in blue-state families are not prudes. Rather, they’re mortified that they might make a baby. “The immoral part is really not so much the sex as having a child that you’re not prepared to take care of,” Carbone says. “That’s really viewed as immoral.”

Carbone had her first child when she was 28, a young age relative to her peers. In 1987, she and her husband, Bill Black, who is also a professor at UMKC, moved to Santa Clara, California, to teach. At the end of the school year, she gave birth to their third child.

“The thing about accepting a job at a school and having a child at the end of that year is that nobody takes you seriously,” Carbone says. “Everybody assumes you’re now going to check out. In a way, you almost have to work twice as hard to persuade everybody you’re going to be a team player and a contributor.”

As difficult as it was for Carbone to balance motherhood and career, she didn’t have to face what she calls the “tragedy” of being a teenage parent.

Carbone has begun making public appearances in anticipation of the release of her and Cahn’s book, Red Families v. Blue Families. She says she receives the most poignant feedback from women who became pregnant at young ages. “Most of them regret — they generally don’t regret the child. They have a sense of loss of what they could have done if they hadn’t had the child at 19,” Carbone says.

Carbone says she is appalled by the way politicians and religious figures manipulate cultural anxieties. One result is abstinence-only education. Most Americans support comprehensive sex education, polls show. Yet the money has gone to chastity training.

There is evidence that virginity pledgers delay intercourse. But when pledgers give in to temptation, they are less likely to use condoms and other forms of birth control. After years of decline, the teen birth rate has begun to creep up, which may not be a coincidence.

Programs like Choosing the Best discuss contraception, but usually in negative terms. At the Clay County Public Health Center, Friedel shows a cartoon of a teenager sitting in a messy bedroom. The caption asks: “Do teens do anything consistently and correctly?” The implication is that today’s scattered youth cannot be trusted to use condoms properly.

During a break, a reporter from The Pitch asks Friedel about Choosing the Best’s pessimistic view of contraception. His lesson teaches that condoms have a 15 percent rate of failure. To illustrate the danger, Friedel paints a scenario in which a person is lying on the ground underneath another person holding a cinder block. The person on the ground, he says, faces a 1-in-8 chance that the cinder block might drop on his or her head. After spelling out the forbidding odds, Friedel says, “If tomorrow you were to become pregnant, that’s a huge change in your life potential.”

Carbone agrees that an unexpected pregnancy carries great implications. But Friedel’s Russian-roulette scenario makes condoms seem riskier than they are. It’s true that between 10 and 15 out of 100 sexually active women who use condoms become pregnant, if the statistic is measured over the course of a year. If the woman in Friedel’s example has intercourse twice a week, the cinder block falls on her head — that is, she becomes pregnant — one out of 800 encounters.

Challenged on his math, Friedel concedes that his cinder-block analogy “was probably not a good way to stress the outcome as relevant.”

Missouri has received $4.7 million from the federal government to pay for the chastity education that Friedel and others provide. The state’s teenagers continue to give birth at a rate exceeding the national average.