Congress shall make no law… 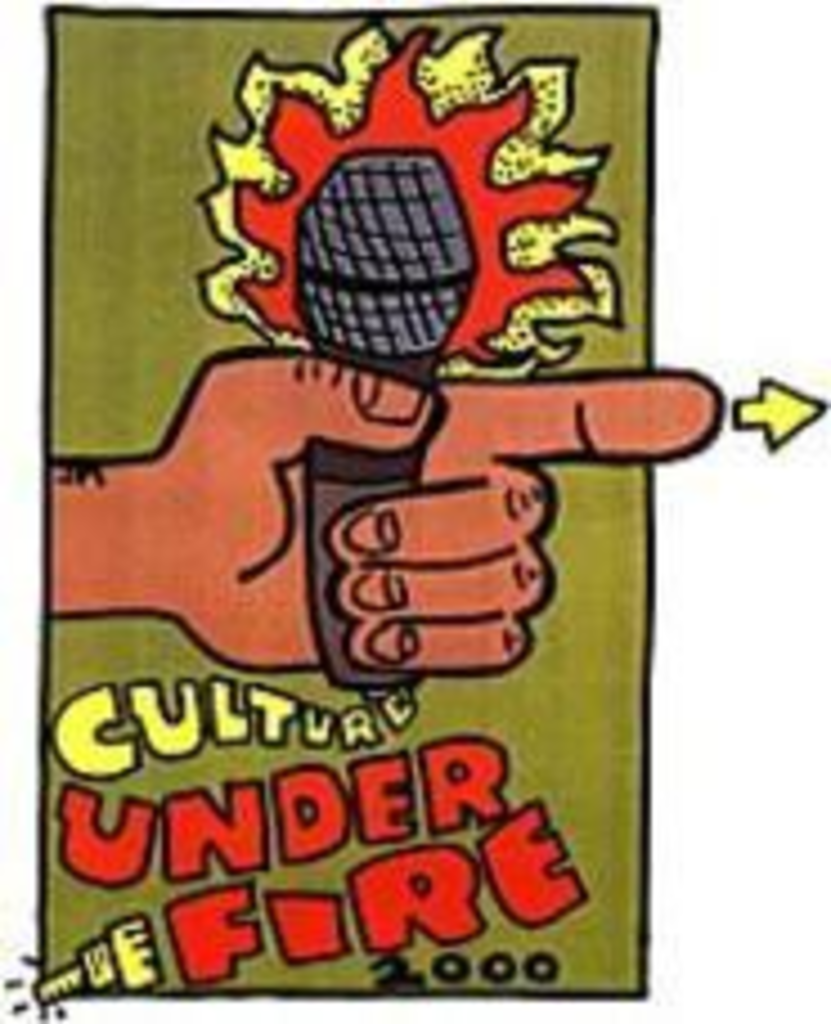 It’s no coincidence that freedom of expression is protected in the First Amendment rather than the Fifth or Sixth. Americans are an opinionated lot and as such hold dear their right to spout off. Many times, however, such passionate opinions are coupled with a need to suppress those conflicting with our own. Then censorship rears its ugly head, making it necessary to hold ourselves in check to preserve the rights embodied within that sacred amendment.

For over a decade in Kansas City, the Free Speech Coalition has sponsored Culture Under Fire, a series of lectures, concerts, and art shows designed to fight censorship and celebrate the First Amendment. “Basically, we started with a week of events to raise people’s awareness of censorship issues and made it a party,” says Anne Winter, owner of Recycled Sounds and a Free Speech Coalition founder and board member. “We quickly found that a lot of musicians, performers, and artists were very interested (in participating).”

Today, that party has grown into an eclectic potpourri of events designed to both appeal to and educate young adults on a multitude of free-speech issues. Winter sees the event as a cue to take charge. “Culture Under Fire is a great annual reminder to pay attention to our First Amendment rights and reflect on the power of speech. We want everyone, especially young people, to take responsibility for their rights.”

This year’s celebration is a four-day event, from May 18 to 21, beginning with “Dancing Outside the Box” by the aha! Dance theater at 7:30 p.m. Thursday at the Westport Coffee House (4010 Pennsylvania). The event will feature interactive improvisation and a question-and-answer session with the dancers. Admission is $5.

On Friday, “Art Trek 2000,” an evening of open art in the galleries of Kansas City’s West Bottoms, begins at 7 p.m. The Dirt Gallery (1323 Union) is hosting the street-party side of things with live music by Superwolf and interactive dot-to-dot art by New York printmaker Robert Erickson. The Old Post Office (1229 Union) will feature a group show with work by 12 different artists. The Red Chair Gallery (811 W. 17th St., KCMO) will have The UMKC Students End of the Year Show. The Hobbes Gallery (1427 W. 19th St.) will open its first show with work that “pushes the envelope in terms of free speech,” and The Fahrenheit Gallery (1317 Union) will feature sculpture by Cuban artist Rafael Perez.

On Saturday, a collection of workshops, speeches, and music called “Break the Blackout” runs from noon to 5 at El Torreon (31st & Gillham), with featured speaker Billy Wimsatt, award-winning reporter and controversial author of Bomb the Suburbs and No More Prisons. “He has worked nationally as an organizer,” says Winter. “Billy’s really interested in getting young people involved in their community and is also a proponent of the self-education movement, which is a very important part of this year’s rally.”

“Break the Blackout” will include workshops on organizing grassroots political movements, a how-to session on designing your own ‘zine, and a DJ demonstration by DJ Just and friends. Shawn Edwards, PitchWeekly staff writer and host of KPRS’ “Generation Rap” will join the “Generation Rap” youth panel and Dr. Susan Wilson, director of adult behavioral health services at Swope Park Health Center, for “Relationships in the 21st Century,” an open discussion on interracial dating and safe sex. A DJ battle hosted by Joc Maxx will let local talent compete for cash and prizes, and a session titled “Why Hip-Hop Always Takes the Bad Rap” will explore middle-class America’s fear of rap music. Other guests scheduled to appear include 7 Fold Symphony and Techn9ne. Admission is $5 for the whole day. El Torreon will continue to buzz when Bands For Free Speech begins at 8 p.m., with performances by Proudentall, Onward Crispin Glover, Powerglide, and T & A. Admission is an additional $5.

The Eighth Annual Culture Under Fire Film Festival starts at noon on Sunday at the Fine Arts Theater (5909 Johnson Drive) with 15 short films, including new work by Todd Norris and a clip from Tim DePaepe’s Shades of Gray. Admission is $6.

Don’t be misled by all the entertainment scheduled for the weekend: Culture Under Fire isn’t just about having a good time. “We’ve testified in Jefferson City (on free speech issues), helped to fight the banning of Annie on my Mind (the controversial novel dealing with teenage homosexuality),” says Winter. “We want to get young adults involved in their world, to try and make a difference. That’s what ‘Break the Blackout’ is all about: Give kids the tools that they can use to help create their culture, their society.”

For more information on Culture Under Fire events, call the Free Speech Coalition hot line at 816-691-8784.