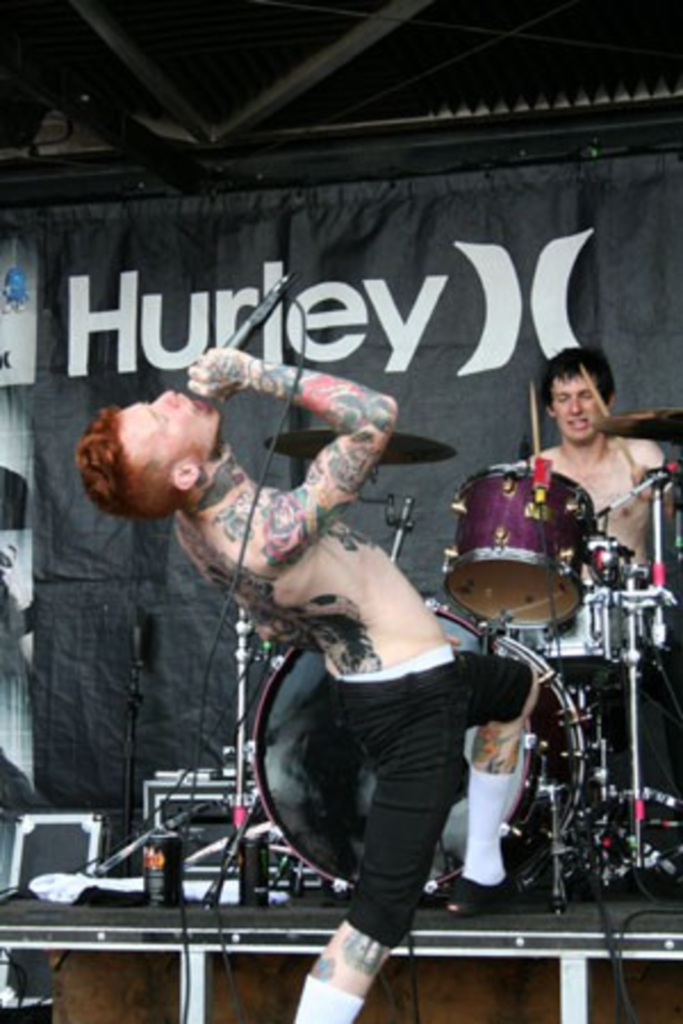 What with the weather and everything yesterday morning, I wasn’t too sure as to whether or not Warped Tour 2009 would be worth attending. The idea of standing in the middle of an amphitheater parking lot all day during a torrential downpour isn’t exactly my idea of a perfect summer day.

However, by the time I hit Tonganoxie on my way out from Lawrence, the sun had begun to peek out and was shining full force by the time I’d made it through the gate and in front of the Hurley stage, where England’s Gallows were one of the first bands of the day. They were also vocally against playing at that hour, with singer Frank Carter stating “no band should have to to play at 11:15 in the fucking morning. Excuse me if I vomit on you.” He then dry-heaved a couple of times. Still, the band hopped off the stage two songs into their set to play the remainder with only their drummer on stage. Their fast, angry hardcore certainly got the day going on an energetic note, if not a positive one. 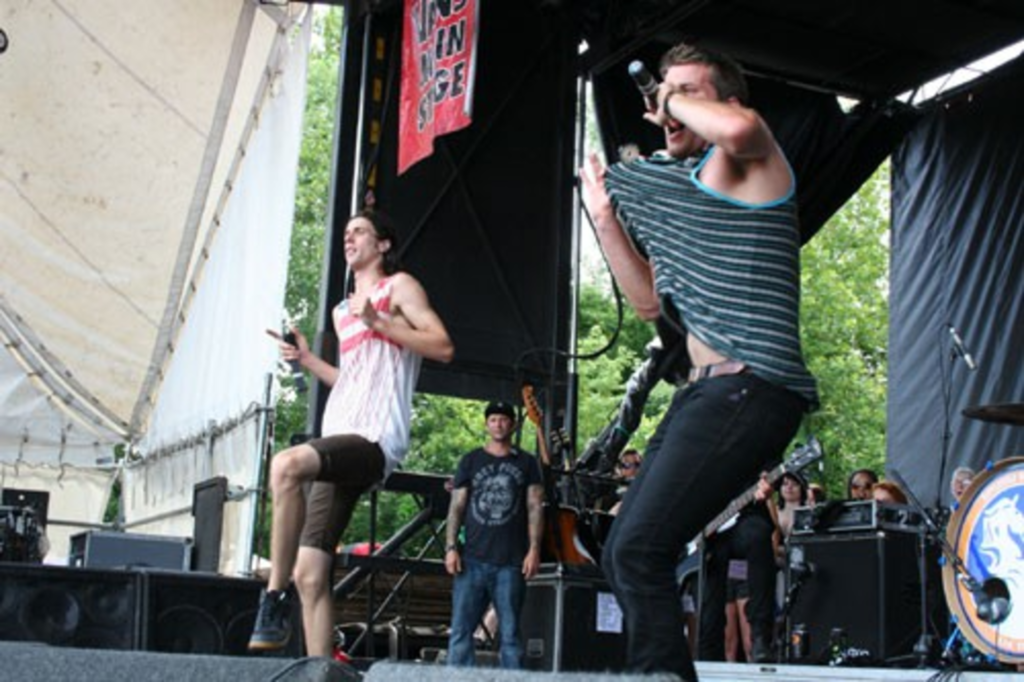 Positivity was the arena of 3OH!3, however. Their crowd was insane. There’s always one band one Warped Tour that has a rabid fanbase, the likes of which every other act ought to be jealous of and covet. 3OH!3 is quite possibly that band. As son as the bass issued out the speakers and caught me in the chest, I was smacked from behind with the roar of the audience. Sean Foreman and Nathaniel Motte brought it, whatever it might be. The band could be considered pop, hip-hop, kind-of punk, kind of rock … really, it’s fairly hard to categorize 3OH!3. Suffice it to say, you can fucking shake your ass to it all day long, and it’s fun as hell. 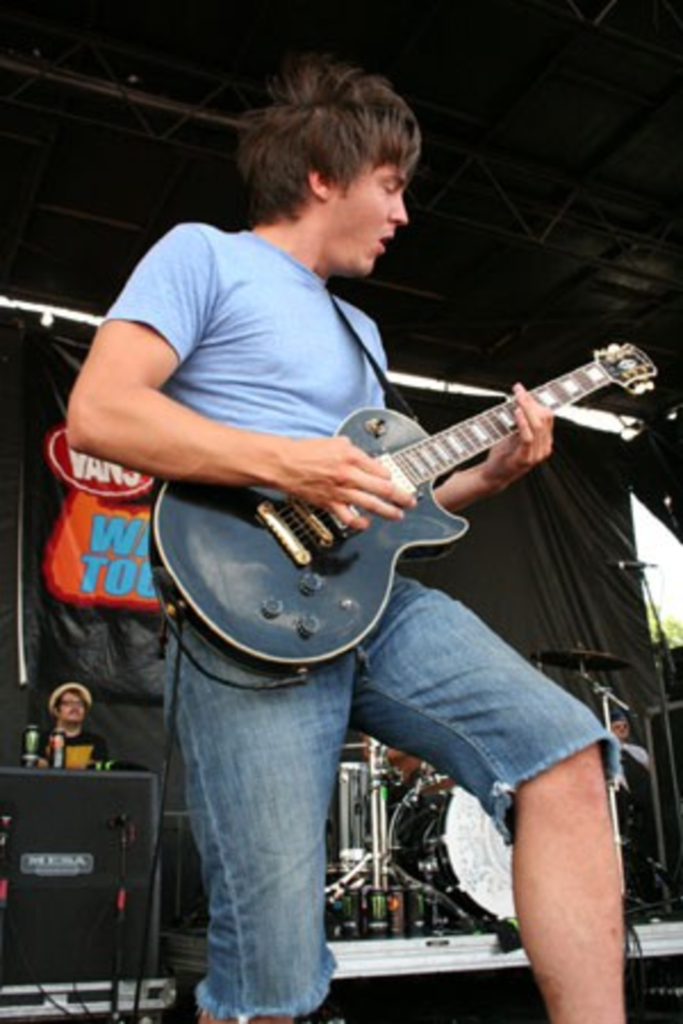 Bands like 3OH!3 and Brokencyde, among others, have probably led to what amazed me about this year’s tour: it was almost an even, 50/50 mix between males and females. It’s quite probably as a result of the higher number of bands that mix in things like electronica, pop, and hip-hop that girls can feel like they’re not in the middle of a chugga-chugga mosh fest. Mohawks were at a minimum, with more bikini tops and flip-flops, by far.

That’s not to say there weren’t any moshy chugga-chugga bands. Chiodos played to a big crowd. They had breakdowns and riffage to spare and were the second act to call for a “huge fuckin’ circle pit.” (First dibs went to Gallows.) Chiodos is textbook screamo — breakdowns, one guy screaming, another crooning. It wasn’t breaking any new ground, and I’d be hard pressed to figure out which band they were among their similar sounding brethren on Equal Vision. 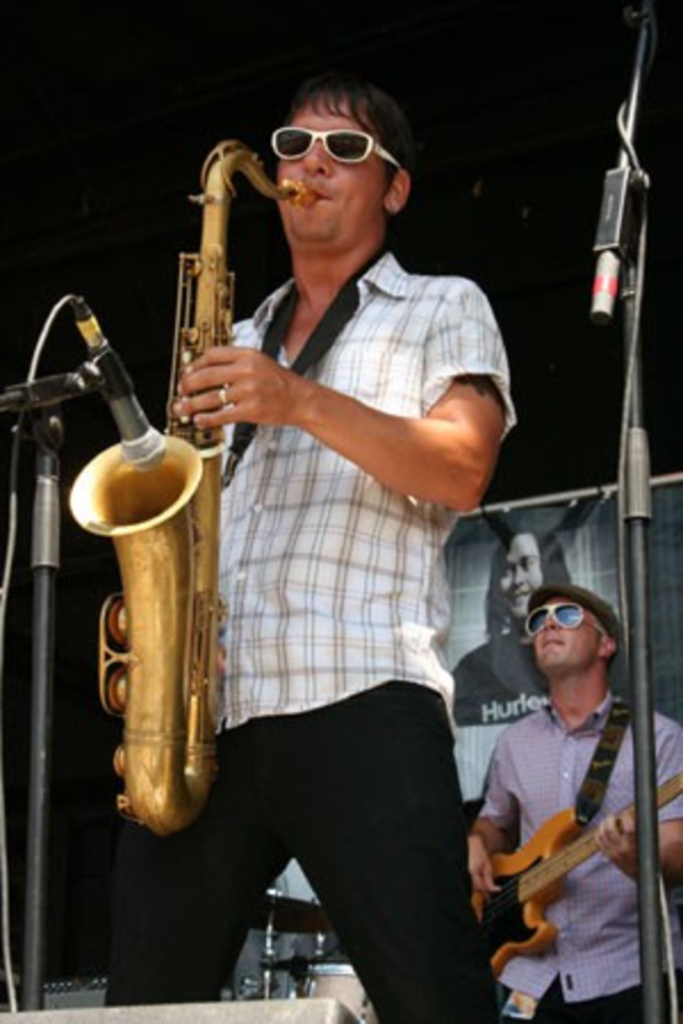 Then again, Westbound Train wasn’t breaking new ground, either, but their brand of soul-ska went down far more smoothly than anything else thus far. Much like the Pietasters and Aggrolites before them, this ska band knows how to get the kids up and dancing. I saw a dude in full-on suit pants and vest skanking like it was air-conditioned, rather than under the blazing sun in front of the Sandstone main stage. Westbound Train also presented a mini history lesson during their set, covering Ben E. King’s “Stand By Me,” which segued into Sam Cooke’s “Cupid.” That dovetailed nicely with the appearance of Mr. Angelo Moore, who gusted with the band on a performance of Otis Redding’s “Mr. Pitiful.” It was interesting, because Moore had played in the exact same spot nearly a year ago with the Aggrolites on last year’s tour.