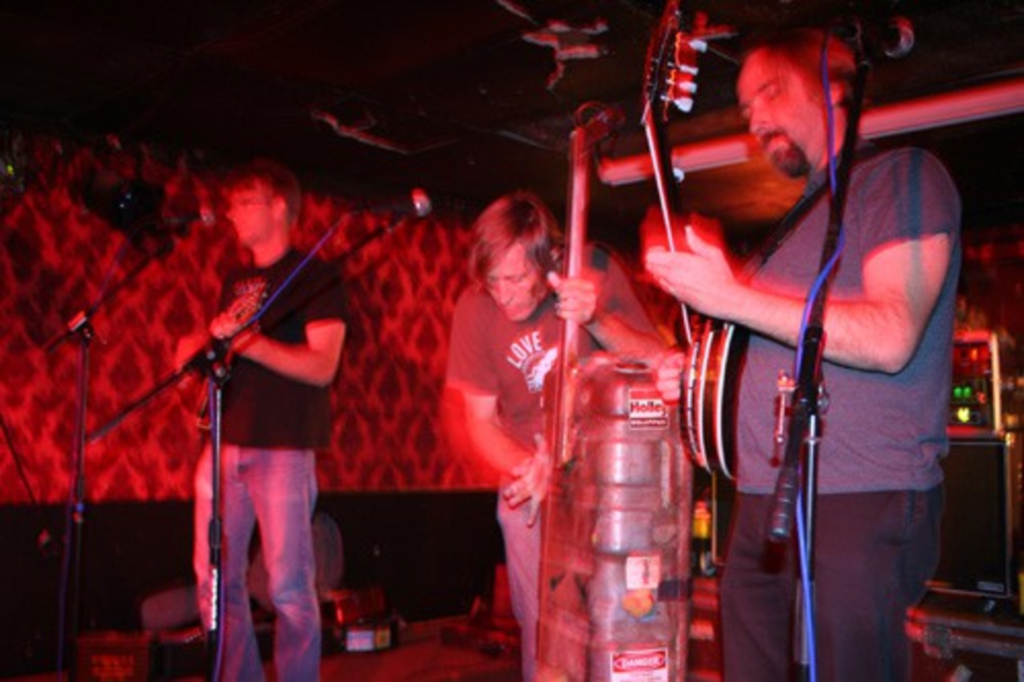 Sometimes, a secret can be kept in this town. Case in point: there’ve been fliers for Drakkar Sauna‘s Saturday night 20009 release party up for several weeks now, with the “With Special Guests” prominently featured on the bottom. I found out a couple days ago who those “special guests” were — Split Lip Rayfield.

Now, I know the secret was fairly well-kept, because I was able to walk up the Jackpot at 9:45 and walk right in. Once the door guy asked, “Are you here for Split Lip?” I figured the cat was out of the bag. However, news didn’t seem to have spread to terribly fast, because it wasn’t like the club was one-in, one-out. You could have shown up right when the show got kicking and gotten in easily.

The band started promptly at 11 p.m., launching right into “Flat Black Rag,” and they didn’t let up for a solid hour. Wayne Gottstine and Eric Mardis switched off on instrumentation, with Gottstine going between mandolin and guitar, and Mardis switching between guitar and banjo. Jeff Eaton knocked around the Widowmaker so much that he had to repeatedly tape his fingers, but his playing was such that the tape ended up littering the floor beneath his gas-tank bass.

The show was dedicated to Kirk Rundstrom (the band’s departed founding member who passed away from cancer in 2007), as are all performances from the band, with Mardis saying that “Kirk would’ve loved to be here.” That, combined with “I’ll Be Around,” left a couple teary eyes in the audience.

The band still plays fast, well, and by the time they finished with “Redneck Tailgate Dream,” the band and audience were sweaty and grinning just as big as when Split Lip had taken the stage. It was incredibly impressive to see a band of Split Lip’s stature in the Jackpot. When a band that can easily sell out a three-night stand at the Bottleneck plays a club of the Jackpot’s size, it has a reinvigorating effect. I’d started losing interest in the band after they started playing huge-ass venues, and seeing them that close, with a group of diehards, reminded me of why I started listening to Split Lip Rayfield in the first place.

I didn’t stick around for Drakkar Sauna’s set, unfortunately. After over-indulging the night before, shooting pictures at the Lawrence Busker Fest all evening, and the hideous smell coming off the gentleman next to me, I’d had it, and needed to make it home. Seriously … the fellow knocking back from his private pocket stash of whiskey smelled as if he’s bunked with a wet dog, and then gone for a bath in skunk juice.