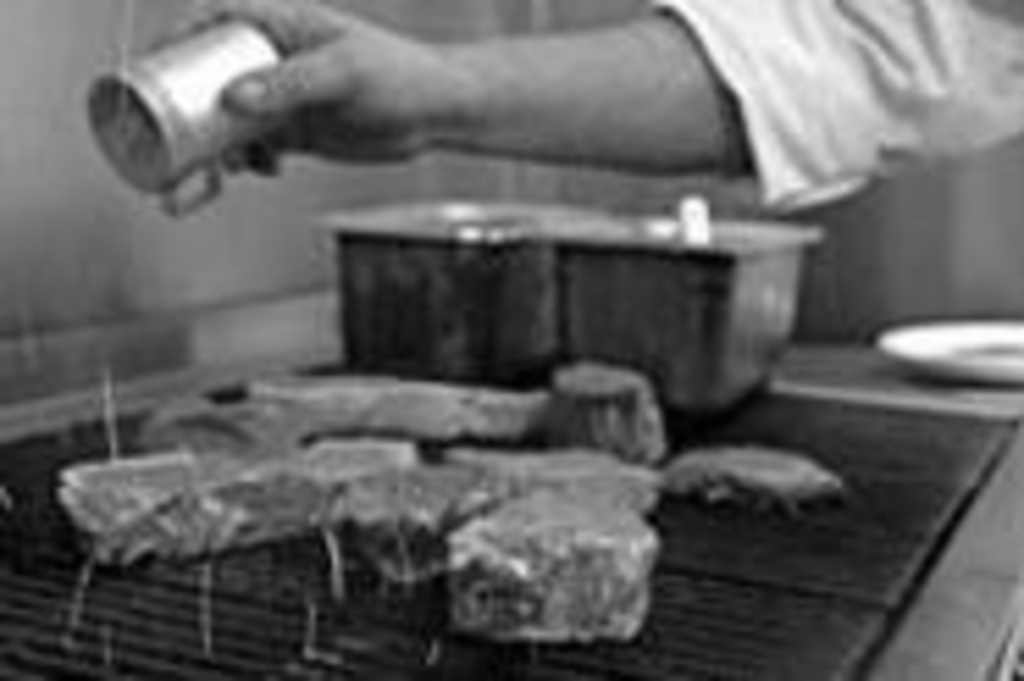 Ronald Reagan was still in the White House when I first met Brenda. We were skinny young servers at a midtown Italian restaurant that was very trendy for about 15 minutes. Brenda’s husband was one of the chefs, and although I had never worked so hard in my life — those goddamned stone floors! The faulty air-conditioning! — we all made money and had a blast. Later I got fired, they quit and we three wound up working together at a combination gourmet food shop and bistro in Fairway. Then we all quit that ill-fated place to take better-paying gigs at other restaurants but wound up working together a third time when Brenda and the chef-husband opened their own Italian restaurant in South Kansas City. That place bombed, too, along with Brenda’s marriage.

Over the past 15 years, our paths would intersect in the strangest places, such as QuikTrip parking lots at midnight and, at the lowest point in both of our culinary careers, a brief stint working together yet again at a greasy pancake restaurant. I still have nightmares about that joint and its unpleasant customers, who were also the worst tippers ever. They never left more than 50 cents and often paid in pennies! When I quit, I spilled ten bucks’ worth of copper on the sticky floor and never looked back.

The day Ronald Reagan died, I looked up from my menu at CC’s City Broiler and saw Brenda. I thought she had gotten out of the life, but there she was in the traditional server costume of white shirt and black pants, her spotless black apron embroidered with the CC’s City Broiler logo.

“What are you doing here?” she asked, looking shocked.

“What are you doing here?” I answered.

What were we both doing way out at 151st Street and Antioch, in a strip-center restaurant across the street from a warehouse-sized Baptist church? It was curiosity that had driven me to visit the first Kansas satellite of a steakhouse based in Columbia, Missouri. A few weeks earlier, I’d been dining in a very good Columbia restaurant, Trattoria Strada Nova, when my friend Bob asked the waitress what other local restaurants she considered excellent places to eat. She recommended CC’s City Broiler, which sounded like a seedy diner — perhaps one inspired by the cheating heroine of the Chuck Willis song “C.C. Rider.”

But in Overland Park, at least, this seven-month-old steakhouse isn’t what you think it’s going to be at all. The free-standing restaurant is plunked down in the middle of a busy yet visually dreary strip mall, but owner Scott Cleeton — who regularly makes a 3-hour commute to and from Columbia — has paid a lot of attention to all the little details. At dinner, the tables are swathed in linen and set with fresh flowers in pressed-glass vases, white linen napkins, shiny flatware and heavy water tumblers. But despite the upscale prices and stylish decorative details, it’s not a formal place. No one in the restaurant batted an eyelash when Bob showed up in shorts and flip-flops. And he wasn’t the only customer dressed so casually.

“Darling, this is Johnson County,” Lou Jane whispered. “They don’t dress up out here.”

CC’s City Broiler takes its fashion cues from the privately owned steak joints of the 1950s rather than from its frenetic and successful suburban contemporaries, such as the Florida-based Outback Steakhouse chain or the Atlanta-based LongHorn Steakhouse franchise. The musical soundtrack, culled straight from the Your Hit Parade era, helps deceive diners, too. When you’re listening to Nat King Cole, Frank Sinatra and Peggy Lee as you sip a Manhattan or nibble on a chilled shrimp cocktail, it’s easier to imagine that Ronnie Reagan is still an actor and people are eating steaks because they like them, not because of some low-carb diet.

Cleeton, who learned to cut beef from his father (a professional butcher and restaurateur), named his two steakhouses in honor of his late brother, Casey Cleeton, who was killed in a car accident when he was 19. “Casey definitely would have gone into the restaurant business,” Cleeton says. “He loved it.”

I loved the stuff listed on Cleeton’s 16-inch menu, starting with gorgeously plump sea scallops wrapped in bacon and floating on an amber puddle of apricot chutney (which tasted more like marmalade). Even more impressive was his version of crustacean buffalo wings, shrimp Atascadero. Drenched in the same Tabasco-and-vinegar sauce that’s usually slathered on chicken wings, the bacon-wrapped shrimp were messy yet tasty. Ditto for Cleeton’s innovative spin on “chopped” salad, a tower of cool greens, feta and blue cheeses, and toasted walnuts wrapped in a curled ribbon of paper-thin cucumber.

Before long, Brenda rolled over a cart loaded with Saran-Wrapped cuts of pink beef and performed a clever monologue on the difference between a petite filet and a “Chairman of the Board.” (It was about $7, I think.) Bob and Lou Jane ordered steaks: a petite filet for him and, for her, a featured dish called “The Aunt Jackie,” which teamed a thick filet mignon with a batter-fried lobster tail. Sure, the lobster could be broiled, but I insisted that Lou Jane get the fried version so I could taste it. We agreed it sounded trashy, but it turned out to be divine and rich; she took half of it home. Bob loved his juicy filet so much that there wasn’t anything left to pack up.

Wanting something different, I ordered the duckling roasted with fried bacon and apples and drizzled with a roasted-pear purée. It was moist and succulent, and if the pear glaze was a shade sweet, the accompanying twice-baked potato — whipped up with cream, cheese and a fiery jalapeño — balanced it all out.

Then Brenda arrived with another tray. This one had a half-dozen plastic-wrapped pastries that she said were baked for the restaurant by some sweet little old lady. One of the managers later told me they come from a dessert company in Wyandotte County, but I preferred the old-lady story because it made the plastic wrap more plausible. We shared a piece of chocolate layer cake that was decent, though nothing really remarkable. “A real grandma-type cake,” Lou Jane said.

It was an anticlimax to a superb meal, but why the hell were we eating cake after a fried lobster tail, anyway?

I returned to CC’s a few days later for lunch and discovered lots of burly construction workers gulping down thick burgers and steak sandwiches over uncloaked tables. I had brought Carol, who, because it was a steakhouse, felt compelled to order fish. “I’ll have the smoked-salmon salad and a cup of soup,” she announced to our waitress. I ordered soup, too, though I usually avoid the combination of broccoli and cheese. This version was silken, creamy and comforting.

Carol flinched a little when she saw the garish, neon-pink raspberry vinaigrette glistening atop the supple salmon on her salad, but after a few bites she relaxed and thoroughly enjoyed it. Although I longed for the 7-ounce Kansas City strip sandwich, I wanted to sample another one of Cleeton’s more adventurous dishes, so I chose the grilled pork-loin chops and was thrilled with my selection. The thick, moist slices of pork had been grilled until the surface was caramelized gold and discreetly draped with that jellylike apricot “chutney.”