The title of the show and most of the works in it is “Navah.” There’s no intervening statement posted anyplace, so I asked the Late Show’s Tom Deatherage, “What’s Navah?” He almost rolls his eyes, launching into a rote recitation about “Hebrew word, means to …” Right, I didn’t pay attention because this work doesn’t need you to know anything before you look.

Simply put, Colby K Smith’s exhibition this month at 1600 Cherry appears custom-made for this space, with its corrugated metal walls, exposed beams, lots of corners. Since it’s a bright Saturday afternoon and not a crowded first Friday, the splinters, dust and fur from the resident fluffy canine are visible. The mixed-media paintings themselves include splintered edges, but these are intentional, and all other angles are precise, each stroke meticulous. The industrial materials are cut cleanly with a respect that some artists choose not to give found objects.

So I did what I always recommend anyone do; I started looking around. Soft yellow, flat grays and a rusty red repeat between the variously sized canvases. There is also a clear blue here and there that is brighter than the sky but that evokes its transparency by the way it’s applied. Reading the hand-penciled wall cards gives a few hints that these expanses — with their repeating lines created by boards, a soft and light-purple foamcore, and paint, are landscapes.

There is “Navah (Chase County View),” a rather minimal expression of a place, with a meshed top section underscored by a double line of blue, a large middle field that is blank and white, and a suggestion of a very low mountain range plotted in a few smears of white putty or paint. The foreground employs no two-point perspective; the viewer fills in that illusion deliberately.

The larger of the two works called “Navah Cityscape” has the addition of “red sky” to distinguish it from the other. The thin red lines that were allowed to bleed softly into the white field wrap around the sides of the canvas, a detail I always relish. All visible surfaces are acknowledged, and there is less sense that “this is a painting” with artificial boundaries looking to be covered over by a future framing exercise.

These lines extend across the front (an approximate maximum distance of 3 feet) in descending horizontal lengths from a set of “towers” that themselves generally descend from right to left, starting by touching the top two-thirds of the field and ending a few inches from the lower edge of the canvas.

These towers are made of strips of boards of uniform thickness, in varying widths and painted in the typical industrial gray paint found covering the attic floors of old wooden houses. Bits of natural-wood and stained-wood sections punctuate the skyline structure, and with time and some imagination, the red lines can be approximated to stylized telephone wires, geometrically perfected sunset streaks or simply an illusion of receding horizon.

Up close there are scratches, blisters and nails that act as punctuation and additional reminders of the materials’ origins, previous uses and character.

The other “Navah Cityscape” is a much smaller, vertical grouping of rounded baseboard trim “buildings,” with what appears to be original paint worn off in patterns from time. These rest on a two-layer foundation of other salvaged boards, complete with old staples and set over a two-dimensional ground that, again, with vision, extends into the foreground while maintaining right angles and proportions of abstraction.

Deatherage and I don’t talk about the work any more, just that he and Smith have had a long association and he was happy that the KCUR arts program had recently featured them and this exhibition. He’s running around adding more handwritten wall tags to the works in the back section of the gallery, because a group of about 100 people (who are members of the Nelson-Atkins’ Society of Fellows) are stopping by soon as part of a Kansas City gallery tour.

Travis Pratt, who will be showing here the month of December, asks me what I think of the show, and I say I don’t know how to talk about it but that I find it beautiful. 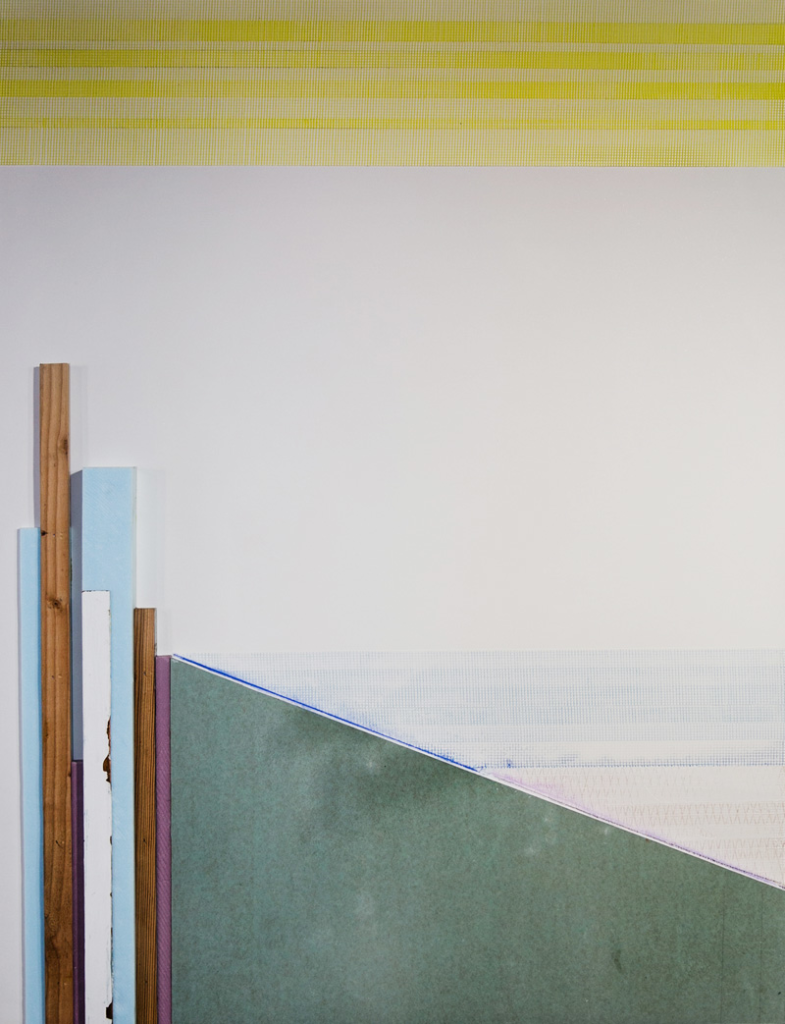 Pratt reminds me that Smith makes a living through buying and selling everything under the sun, and that this work employs both that process and those materials. I remember that time when Smith and I worked in the same office and he was running himself ragged dealing with the contents of a few railroad cars. He takes delight in finding rare and significant objects and collections and matching them with people who find them most valuable. And anyone who has been in his studio is familiar with the piles of every other thing under the sun that are waiting for a perfect buyer or to be used in his art. The aesthetic is familiar to anyone who’s ever visited the City Museum in St. Louis (created by the late Bob Cassilly).

“Navah 7” is framed under glass, as are a few postcard-size works, and while they are more delicate than most of the other works exposed to the air, the separation is slightly off-putting, even though the composition and handling of materials remains as skillful and inviting. “Navah 7” is mostly a light wash of yellow, topped by the mesh motif found elsewhere, tiny white circles on blue, and repeated in a green grid below, as part of a scalene triangle that rests on a soft blue shape that juts into what other works have taught us to regard as buildings but here are scant and can be appreciated as forms and colors alone.

When the tour group arrives, they’ve come from Studios Inc., where Smith is director, and they make the connection a few minutes after completely filling the space that the artist who is about to address them is the same person who just introduced the residency program a few blocks away. And he tells everyone that he is in the salvage business and that the show’s title and purpose is “to bring home and make beautiful.” Out of the thousands of items that come across his purview, in this case, for this show, it took going over the characteristics of at least 350 boards to select the ones he wanted to use in the works here, he says.

That’s all the statement there is, and ultimately, it’s summed up by his saying he just wants to create things that are beautiful.