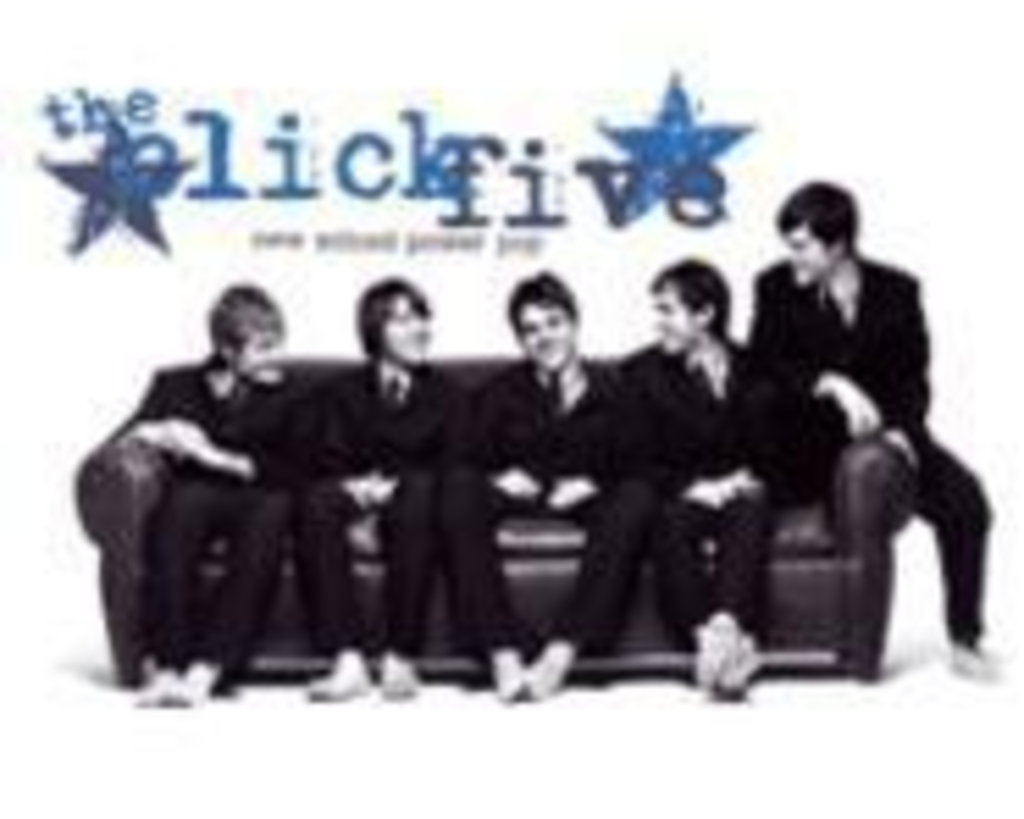 In a classroom, bored teenagers tap pencils on their desks. Then a note is passed: “The Click Five on the roof now!” The class storms up the stairwell, a helicopter lands and five young gents in mod suits and haircuts step out with their instruments.

It sounds innocent enough, but a diabolical brainwashing plot lies in the details. The logo for the Click Five appears on the side of the helicopter, on girls’ mini-tees, on the concrete roof itself and on one bare arm marked with a Sharpie. That was all we could spot in one viewing of the video for the band’s first single, “Just the Girl.” In slow motion, the video may reveal ominous, flashing warnings: DIG THE CLICK FIVE OR YOU’RE A LOSER. COOL PEOPLE HAVE CLICK FIVE RINGTONES. BUY THE ALBUM OR YOU’LL GET FAT.

Yes, the corporate marketing behind the band is brilliant. But it takes more than a label (Lava Records) to get a quintet of legitimately talented Berklee College of Music grads to the TRL soundstage. The Click Five knows exactly what it’s doing. Oh, yes. Even before Lava stepped in, the Five had mastered its formula: Play like the Cars, look like the Beatles, sway instruments in unison and never, ever say no to an autograph request.

It’s just the sort of earnest determination one might expect from a group of Midwesterners — though they met in Boston, all but one hail from the heartland. In fact, keyboard player Ben Romans is a native of Salina. Romans really, truly did much of the writing for the debut album, Greetings From Imrie House, and he credits his artistic gumption to the cultural void that is central Kansas.

“I think it helped my creativity to be in a town that didn’t have that influence,” says Romans, who in interviews appears to be the brains behind the operation (and thus, predictably, is the least boyishly dreamy of the group). “It helped the productivity to be in a place where there wasn’t much structure. You had to make it happen for yourself.”

The band and its industry backers have made plenty happen already. First, they attracted star power for the album: Fountains of Wayne’s Adam Schlesinger wrote two songs, the Cars’ Elliot Easton lent a guitar solo, and Kiss singer Paul Stanley co-wrote a track with Romans. Then the band toured with sugar-pop royalty, opening for Ashlee Simpson, the Backstreet Boys and Aaron Carter. Paul Stanley being the edgiest, hardest-rocking persona among those names, the Click Five wisely has not shunned the boy-band label when confronted by wily media types.

We being wily media types, we take the opportunity to ask Romans whether he knows that Salina is the home of a thriving hardcore-metal scene. Romans, who plays keytar with only the slightest touch of irony, is not only charmingly unaware of said scene but altogether pumped about it.

“Next time I come home, I’m getting out the spandex and doing a metal tribute show,” he says, referring obviously to the wrong genre of metal. But who can fault him? He has a much bigger scene to keep track of.