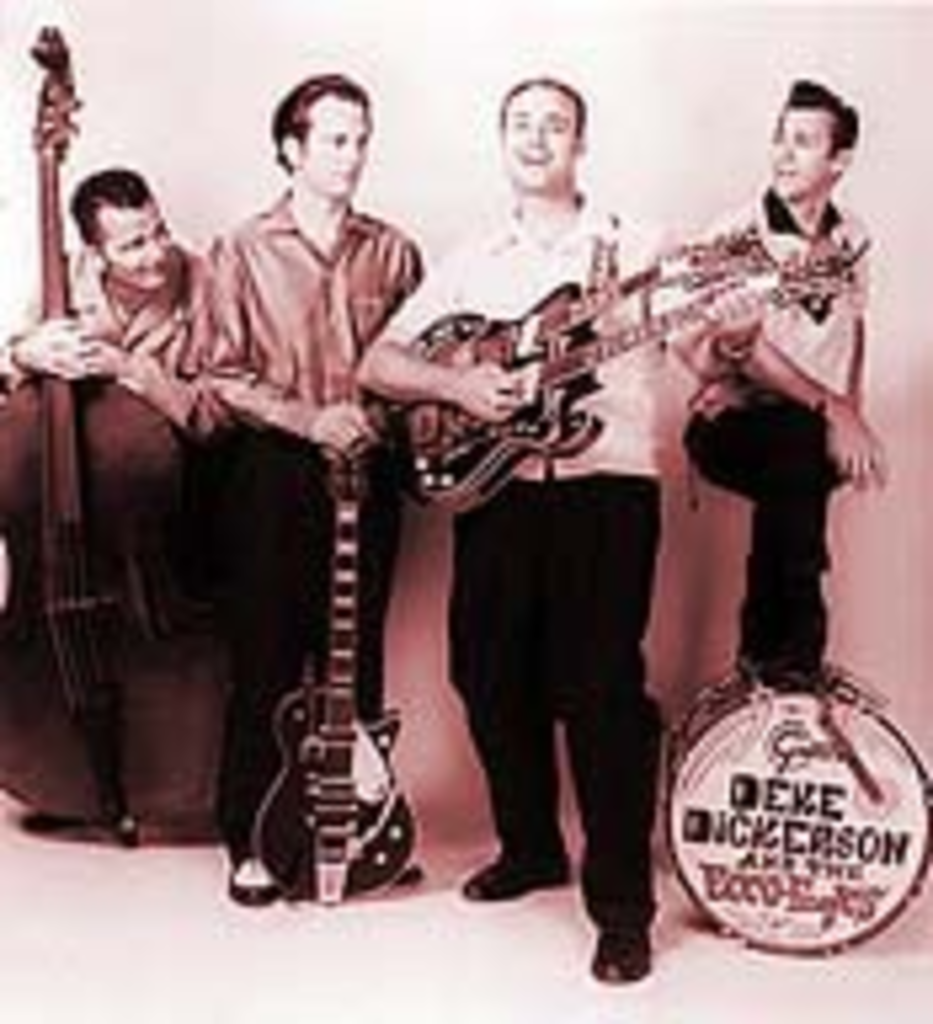 He might be a virtual embodiment of all things retro, but guitarist Deke Dickerson bristles at being pigeonholed as a member of the nostalgia bandwagon. True, he shows proficiency in such time-honored genres as rockabilly, jump blues, hillbilly boogie, and surf music, but he says he developed his taste naturally for these styles years ago.

“I grew up in Columbia, and one of the nice things about that was The Blue Note, which had so many really amazing, diverse things going on,” recalls the Missouri native. “Two of the first shows I saw were Willie Dixon and Bill Monroe. I saw a lot of country, bluegrass, and blues people. I got into the rockabilly guys from records. I’ve really been in awe of recorded music from when it started in the ’20s until when, in my opinion, it started to taper off in the mid-’60s.”

The sounds he admires are decidedly vintage, but Dickerson says that his music does more than speak to the thrift-store crowd. “I think of it as a valid type of music, like jazz or blues,” he explains, with a conviction in his voice that makes it clear that Dickerson is performing these styles due to a true respect for their musical importance. “Both my folks are from rural Virginia. I don’t think they mind being called hillbillies. I like to think I inherited my sense of the soul of music from them.”

Dickerson seems determined to lead a one-man revival of a variety of retro styles. He started off playing straight-ahead surf rock in the local band Untamed Youth during the ’80s. The group broke up before the surf sound regained popularity because of Pulp Fiction, and the able-handed guitarist moved on to the Dave and Deke Combo, an impressively brash rockabilly duet that earned quite a cult following.

It’s not hard to differentiate his new ensemble, the Ecco-fonics, from his earlier work. “Both of those bands were genre bands,” he says. “We were attempting to do just one specific thing. The thing about this band is that it’s kind of a combination of all the other things I’ve been interested in. Sometimes I think it might be too schizophrenic, but then I get all sorts of people who come up and tell me they really appreciate what I do, and that makes it all worthwhile.”

His newest album, 1999’s More Million Sellers, features surf-rock instrumentals, boogie-woogie jams, and even a tongue-in-cheek foray into rap. Recorded with the Ecco-fonics, this amusing album showcases Dickerson’s unabashedly corny, countrified lyrics. A quick survey of the album’s tracks turns up such lines as, I like a little coffee and I like a little tea/But poon-tang, brother, is the thing for me and You’re my Cadillac in the auto show of love/Positraction guaranteed to give my heart a shove.

Dickerson makes no pretense about any supposed depth in his lyrical subjects, admitting, “What happens with me when I write a song is that one phrase gets stuck in my head. Most of my songs are written in two or three minutes.” If the works aren’t poetic, however, they are certainly fun, made more so by Dickerson’s inspiring abilities on the guitar.

Replete with guest stars such as Jerry Scoggins (the voice of The Beverly Hillbillies) and diminutive actor Billy Barty, More Million Sellers is a veritable Hollywood Squares of forgotten talent. “I made up a list of who I wanted to work with after the first album, but I never expected I could get everybody off the list,” Dickerson says. “One of the great things about living in L.A. is that you can just call these people and tell them what you want them to do, and they usually don’t have much else going on. None of them had heard of me at all, but that didn’t matter to them.”

Despite his success in the studio, however, Dickerson sees his act’s primary focus as touring. “You don’t make any money in the studio,” he says. “We decided that we didn’t want to have day jobs, and that’s why we’re out here playing. Last year we did 250 shows, and there’s really nothing else we’d rather be doing.” He laments the fact that Carl Leyland, who turns in some inspired boogie-woogie piano on the recording, refuses to join him on tour. “Leyland has given up on touring totally, and I wish I could convince him otherwise.”

The current version of the Ecco-fonics has a new look. In addition to bass player Brent Harding, who has been with Dickerson for some time, the ensemble includes two men who joined the band since the last time it went through Kansas City. Joe Vinatelli, who has played with Big Bad Voodoo Daddy, is on the drums, and Bobby Horton, from Austin, Texas, is “a lot of fun on the steel guitar.”

His goal for the future is to continue to spread his unique gospel. “I’m sure we’ll do different things,” he says. “I guess I’d just like it if we could become one of those acts like Junior Brown that sort of crosses the line from being a retro or nostalgia thing into being just a hip thing that people like.”

Deke Dickerson & the Ecco-fonicswith The SilvermenTuesday, Feb. 29at Grand Emporium