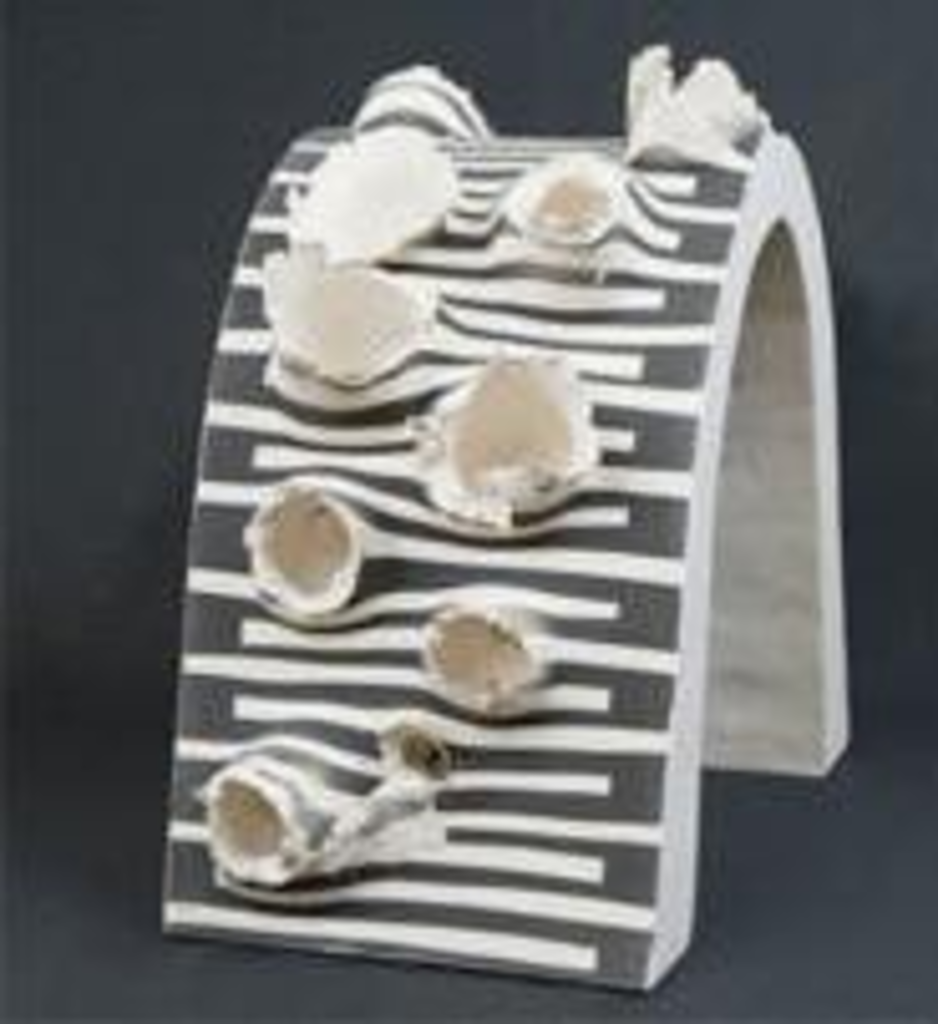 Robin Beard‘s work recalls childhood moments — making strings of hair or wormy things out of Play-Doh, or watching lit-up, oozy snakes uncoiling along a sidewalk on the Fourth of July. Only now, they’re up on walls at the Dolphin Gallery.

Beard’s ceramic pieces, at first glance, don’t appear to be ceramic. Some parts are made of porcelain ribbons and look like a silicone substance; other parts, of black stoneware, resemble rubber tubing. Beard holds them together with the kind of plastic ties that wrap cords on new TV sets or stereos. The effect is industrial-looking, as if Beard has found his materials in a junkyard.

Beard, who works in the Dolphin’s wood shop, considers himself a sculptor — the show’s only traditional ceramic pieces are platters hanging on the gallery’s back wall, but their centers have been ruptured, rendering them nonfunctional.

Most prominent among the sculptures is “Shadow Drawing,” in which porcelain pieces look as if Beard has pulled them like strands of taffy or put them through the Play-Doh extruder toy. Varying widths and shapes of porcelain intertwine with black stoneware for a product that resembles the mass of wires you’d find under a computer desk. Instead of lying tangled on a dusty floor, though, the piece is mounted on a white wall, and the lighting above it creates a festival of shadows around it.

Though it’s playful, Beard’s work is never amateurish — he uses his materials in a way that’s both experimental and controlled.

Sitting on top of its pedestal, “Arch” is an anomaly amid the hanging sculptures. When the porcelain was still wet, Beard used firecrackers and compressed air to create pustules on its surface. Some blasts created deeper pockets than others; some have flayed edges, and others look as if they’re still expanding. Zebralike stripes run over the piece, widening to create the illusion that the surface has expanded to accommodate the explosions. “Arch” looks strong, its breadth thick enough to create a shallow tunnel. It’s as attractive as a new toy — we’re sure we could have used this piece in an excellent G.I. Joe operation.