City in Motion and Fishtank give us happiness … and pie 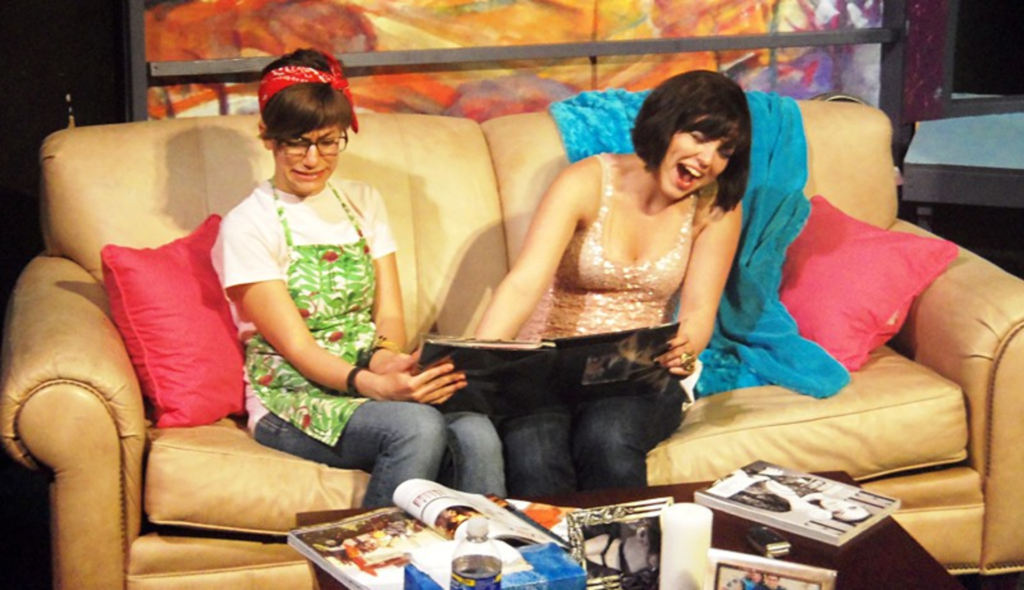 Pies begins with two housecleaners entering a new client’s apartment and finding sexually explicit photos openly displayed, a naked man in a closet, and a kitchen full of pie, pie and only pie. It’s the first layer in a lattice of misperceptions, mishaps, deceptions, slapstick, drugs and pie fetishism. The Crucible, this isn’t. (Liccardello starred in the Metropolitan Ensemble Theatre’s 2008 production.)

Despite its titillating title and extended full-frontal nudity (J. Will Fritz, good-natured and very comfortable with his bits), little about this play is really raunchy. Any porny content is left to the audience’s imagination. Besides, what’s the naughtiest thing that could happen between one beautiful naked woman and a bunch of pies?

Fritz and Maggie Hogan (who plays the responsible, levelheaded Talia) are likable actors who share an easy, pleasant rapport. But the plum role belongs to Emily Peterson, who plays Talia’s best friend, Angela, a sexpot of slippery morals and slipperier tales. With star presence and ace comic instincts, Peterson makes Angela perfectly irresistible, even when she’s manipulative, disloyal and untrustworthy.

Liccardello’s farce is more tartlet than pie, clocking in at barely 50 minutes. The dialogue occasionally sounds canned, and the plot barely holds together — the whole thing is light and flaky. But TJ Chasteen’s brisk direction and the fresh performances of the three young actors make Pies a tasty treat. (By the way, homemade pie is available for purchase before the show and at intermission. I recommend the apple.)

For all the burlesque and aerialist action happening around town, there’s precious little modern dance. By my count there are three, possibly four, professional modern companies in Kansas City, but none of them perform with any regularity.

So on a glorious afternoon, I descended into the basement of Union Station to catch City in Motion in its brief run at the H&R Block City Stage. The showcase of in-house and guest choreographers, titled Transported, was uneven but rewarded viewers with three lovely dances.

The programmers might agree with me because they placed these pieces in the three most strategic positions: the show’s opening, right before intermission, and the finale. What they had in common: pure dance. Some of the rest of the program was burdened by props, weak conceits or silly story lines (black widow, anyone?), but these pieces trusted in the body.

All three were also ensemble pieces, energized by groupings and regroupings, patterns made and diverged from, entrances and exits. With the lack of performing opportunities in Kansas City, it must be hard to keep skills honed, and some soft technique was obvious in solo and duet dances. But the occasional wobbly footing or strained lift disappeared in these bigger pieces. (Choreography was also less successful in the smaller dances, which often relied on the sinuous-sensuous posturing and writhing that seem curiously popular locally.)

The fitted white shirts and floating, filmy white pants that the company wore in David Ollington’s “Formula” glowed ethereally against the bare stage’s glossy black floor. Moving at right angles, the eight dancers advanced and retreated, spun and marched back, swept left to right and right to left, intersected and wove, all to a propulsive, drum-heavy track. True to the title, there was something pleasantly formulaic about the patterns, as though the seeming randomness had been determined by algorithm, the dancers demonstrating fractal growth.

The dancers varied in precision and power, particularly on attacks and extensions. As a whole, the ensemble displayed good lines and fine esprit de corps. You could see the latter in Penelope Hearne’s “The Glorious Death of a Mechanical Answering Machine,” set to music by the New England sound-collage geek-duo the Books. This piece celebrated the joyfulness of dance vocabulary, with collisions turned hugs and playful mounts and clusters. It was one of the sweetest dances I’ve seen, and the dancers seemed to have a blast.

Stephanie Whittler’s “Something Unknown” started silently, with the taupe-clad company moving in unison. The aesthetic was minimal: recurring arm and leg motifs relieved by as little as the flexing of a foot or a casual relevé. When the music began — a Björk song, staticky and otherworldly — dancers slowly began to leap, and their high jumps took on the feel of full-on cavorting. It was a delightful and, yes, transporting celebration of the joy of moving through space.