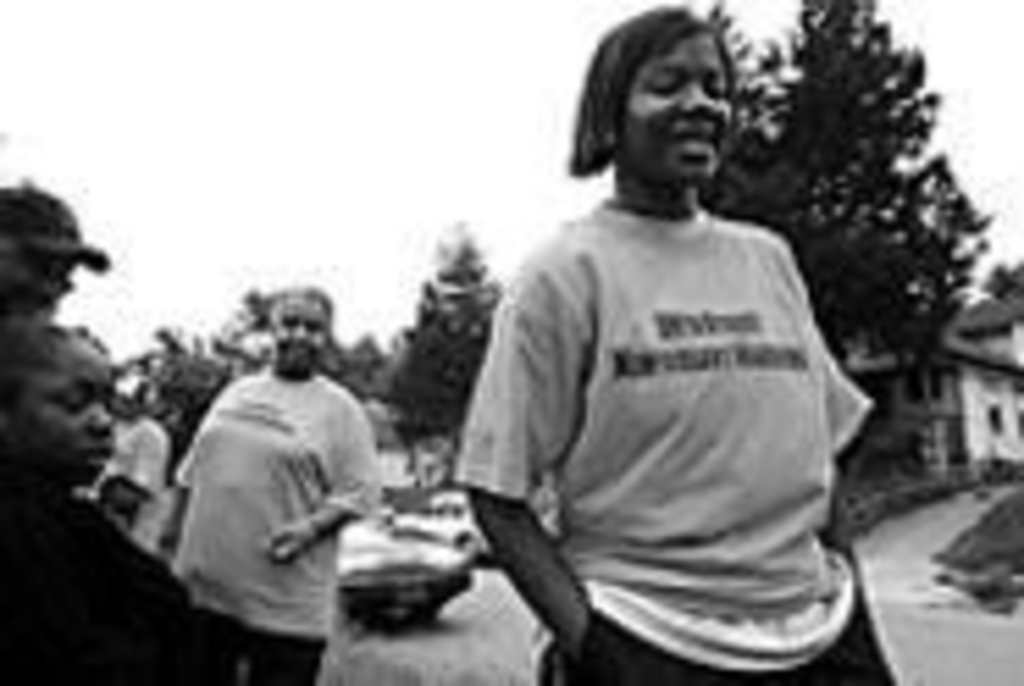 The march begins at the corner of East 24th Street and Cypress Avenue, as it does every Friday evening. “No more drugs!” the marchers chant, their path lined by weeds, bars and, on one property, a stack of soiled mattresses. “No more killings!”

The East 24th Street area struggles with violence and a lack of social services. The police count nine homicides in the past two years. The Minute Circle Friendly House closed last year after almost a century of serving the poor. March organizer Rachel Riley worries for the children who live in the neighborhood.

“We can build a big arena downtown, but what about a skills center or a Boys and Girls Club down here?” Riley asks.

Riley’s 19-year-old son, Larry, was shot and killed last year as he sat in a car, a casualty in a running dispute between neighborhood rivals. The marches became a routine after a vigil held for Larry. Many of the regular participants are friends and relatives of Riley’s. Sometimes 15 come, sometimes 100.

Though their drama is undercut by their frequency and small size, the marches have received at least fleeting interest from The Kansas City Star and politicians. (“When it was votin’ time, they were all here,” Riley says of the latter.) The Kansas City, Missouri, Police Department deploys an escort. Before a recent march, Riley reached into a cruiser to shake hands with a captain who had stopped to say hello.

One constituency, however, has proven largely immune to Riley’s efforts. About 25 churches stand within a mile of 24th and Cypress, but the only minister who has marched regularly is Robert Rhodes, the pastor at Olive Street Baptist Church, which Riley attends.

“I’ve taken fliers. Other ministers know that we’re out here, but for some reason, they don’t come,” Rhodes says.

Robert Stout, a longtime neighborhood resident, has also been disappointed by what he perceives to be a disconnect between clergy and community. In August, Stout invited area church leaders to attend a take-back-the-neighborhood meeting of the Chelsea Park Community Group. Stout says nine pastors who told him they would come to the meeting were absent. After the meeting, Stout fired off a letter to the no-shows. Stout wrote that he was “ashamed” that ministers of predominantly black churches would appear to be so apathetic.

“These are black ministers, and it’s black kids who are being killed,” Stout, who is white, tells the Pitch.

The ministers willing to speak to the Pitch offer a variety of reasons for their seeming reluctance to get involved. The Rev. Clarence Newton Jr. of New Home Baptist Church on Van Brunt Boulevard says he missed the Chelsea Park meeting because of an emergency. Still, Newton says, “It [Stout’s letter] really hit me. I said, ‘Man, this guy’s right. I did tell him I would be there.’ I should have had someone at least go and represent me. So there’s no excuse there. I just plum blew it.”

Not all ministers who missed the meeting are as contrite as Newton. Clayton D. Moore, the pastor at Bread of Life Community Baptist Church, says he told Stout he would attend the meeting if he could. “But he has to understand, my schedule does not revolve around his,” Moore says.

Moore clearly did not appreciate being scolded by Stout. Moore faults the organizer for first reaching out to him on a Sunday. (“Sunday is my worship,” Moore says.) Moore, who contends that Stout doesn’t belong to a local congregation, says he finds it interesting that Stout wants “influence” over the church. “If the church is going to be a part of the community, I think the community needs to be as much a part of the church,” Moore says.

Moore’s insistence on reciprocity is echoed by other pastors. Darren Faulkner, who filled a vacancy at Wesley Heights United Methodist Church on Hardesty Road this year, says most churches in the northeast have no more than sixty or seventy people in attendance on Sundays. “If they’re looking for some leadership to come from the churches, then the community certainly has to support the churches … and that’s not happening,” Faulkner says.

Area pastors also question the worth of what Newton calls “the political end.” W.T. Bolen, pastor at Temple of Faith Church of God in Christ on East 24th Street, says he marched “a couple of times” with Riley but found that the experience lacked a ministerial component. “What they should be doing is probably going door-to-door,” Bolen says. “Not just everybody — maybe one or two marchers, passing tracts, kind of witnessing to some of the people out there.”

Like Bolen, Moore says the greatest impact he can make is in helping parents raise their children. “I’ve tried to be a presence in the neighborhood, but until someone actually sits under the tutelage and is willing to be imparted by the word of God, it’s not going to really help a whole lot.”

The Friday-night marches may not bring residents closer to the Lord, but the police have noticed a difference. KCPD homicide detective Everett Babcock says witnesses have seemed more willing to share information in recent months, which has led to more arrests. Babcock says of Riley, “If everybody out there took an active part like she does, there would be a lot fewer problems and a lot fewer bodies lying out in the street.”

The pastors say they touch the community in their own way. Newton says he started a men’s recovery home and wants to set up a similar home for women and a food pantry. Bolen says he is on the streets every Saturday, reaching out to idle youth. “I go pick these kids up, bring them to my church, find something for them to do, to clean. I give them money out of my pocket, or I might take it from the church treasury.”

Bolen may be a force on East 24th Street on the weekends, but he lives in Johnson County. A number of ministers who founded churches in the neighborhood, in fact, do not reside there. Newton lives near Highway 71 and Red Bridge Road. Moore lives outside the neighborhood. (He won’t say where.) Stout draws an unfavorable comparison between pastors who live outside the neighborhood and absentee landlords. “They drive in on Sunday, say hi and drive right back out,” he says.

Regardless of where the ministers live, Stout and Riley may be holding them to an unrealistic standard. The pastor as community activist is actually pretty rare. White and black, Catholic and Protestant, members of the clergy devote less than 4 percent of their time doing community outreach, according to the Pulpit & Pew research group at Duke University. Most churches perform some social service, but only a few make it a tenet of their existence, says Mark Chaves, a University of Arizona sociology professor. “The vast majority of churches are only peripherally involved in their communities,” says Chaves, the author of Congregations in America, a book that draws on a study of 1,230 churches nationwide.

In preparing his book Streets of Glory: Church and Community in a Black Urban Neighborhood, University of Chicago sociologist Omar McRoberts spent time in a part of Boston where, like East 24th Street, rents are low and crime is high. McRoberts counted 29 congregations within a square mile. Nearly all had taken over vacant storefronts.

A high concentration of churches did not translate into a high level of community involvement, however. McRoberts says many pastors did not even know the neighborhood was called Four Corners. “Churches are not necessarily neighborhood institutions,” he tells the Pitch.

The churches in Four Corners were packed together, McRoberts found, mainly because of the glut of cheap space, not a desire to lay claim to territory. It is also often the case that churchgoers in these “religious districts,” as McRoberts calls them, do not live in the neighborhood but are drawn to the style of worship from afar. “Churches are communities of affinity, and we cannot assume they overlap with our conceptions of a geographic community.”

Rachel Riley proves McRoberts’ point. She worships at Olive Street Baptist Church but no longer lives in the neighborhood, having moved to Independence five years ago.

For the other churches on and around East 24th Street, the neighborhood may be gaining significance. Largely because of Stout’s letter, 16 pastors met on October 2 to discuss forming a ministerial alliance. “We’re ready to do some things,” Newton says.

Newton and the others have a standing invitation to join the Friday-night marches. A recent march ended with Riley’s thanks to participants. Their chants could be heard from blocks away. “It’s not like they don’t know we’re here every Friday,” Riley said as the marchers disbanded.