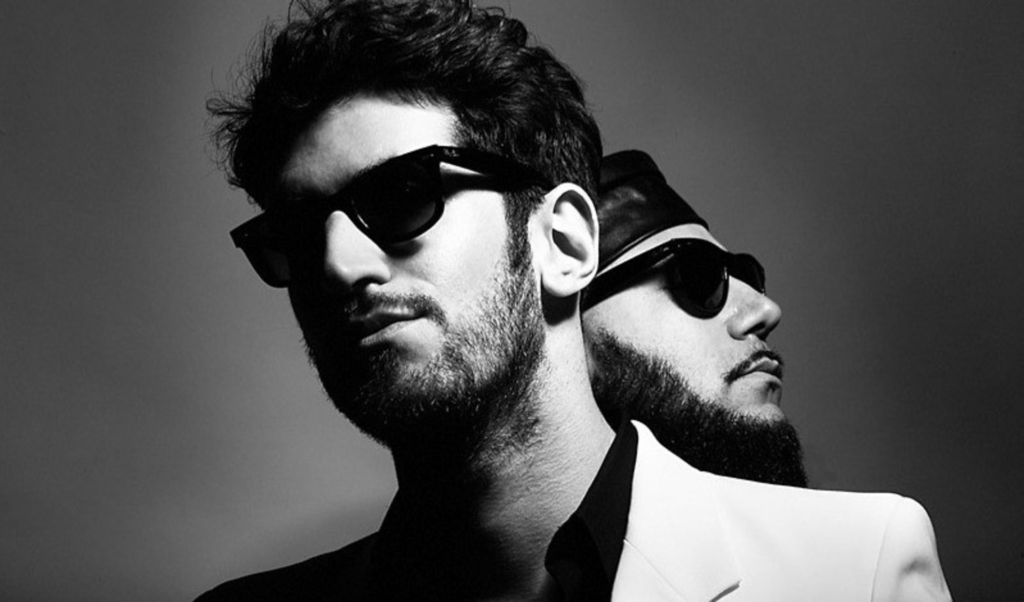 Dave 1 and P-Thugg, the two halves making up the goofy, sexy, synth-heavy whole of Chromeo, bring their traveling dance party to the Midland Thursday.
In anticipation of that sweaty, joyous occasion, The Pitch recently chatted up Dave 1.

Dave 1: It’s just the two of us, most of the time. Sometimes we have our backup singers that look like — you know that Robert Palmer video, “Simply Irresistible”? You know, slicked-back hair and tight fitting …

No, just like a really tight skirt. Anyways. But yeah, it’s just P [P-Thugg] and I, and there’s a bunch of instruments around us, and he’s got a dozen synthesizers, and I’ve got my guitar and my bass and all that. It’s like a big dance-party, sing-along, hand-clap kind of vibe. At least, that’s what I hope.

Is there an act you don’t like being categorized with, when music journalists describe you?

How do you stay on the right side of LMFAO?

I knew from the beginning that that’s what was implied in your question. [Laughs.] I think [exhaling heavily] … I think that’s kind of self-explanatory. On a credibility side, the accolades that we have speak for themselves, but at the same time, on an iTunes, Top Ten side, LMFAO’s success at what they do speaks for itself. The music’s different. Our stuff is really synth-based, and it’s grounded in more of a Hall & Oates tradition. They do what they do. It works for them. I happen to know those dudes. They’ve got a pretty deep knowledge of music. I think they’re doing this because they know it’s going to work for them and it’s successful. I’m not knocking them at all, but I don’t see how anybody who’s ever listened to our music carefully or seen our videos could confuse the two. Who else could you compare us to? I guess in terms of live performances and the venues we play at, Cut Copy — they’re a good parallel. They do the same touring circuit we do. But again, our music’s really different.

That is what gets annoying about music journalism. “These guys sound like these guys.”

I like that. And you guys got to play with Daryl Hall. What was that like? Is it good to meet your idols?

Yeah. Sometimes no. I’m always reluctant because, you know, obviously you like them for their work, not for who they are. At the same time, we couldn’t pass up the opportunity, and it was really an honor for him to acknowledge us. I don’t know if we met Prince, if we would click the same way. And I don’t even know if I want to meet Prince, other than to say, Thank you, and shake his hand. With Daryl, we actually really clicked, and there was a cool connection. He really understood where we came from and he also related to us as people.

People tend to say that you have this sound of the ’80s, and you hit at a period when everyone was getting nostalgic for the ’80s.

It’s not even true, because when we started making Chromeo, when we put out our first album, I mean, the people who were making a big impact in the sort of, like, the “cool” dance scene were people like Fischerspooner, who were referencing a sound from the ’80s that was totally different than us. We came with the forgotten sound of the ’80s, the non-trendy sound of the ’80s, the sound of the ’80s that people were making fun of. The Phil Collins and Rick James. Not New Order. Our shit was never Joy Division or Depeche Mode. That was never us. Not taking anything away from those acts, but they were always cool, whereas the stuff that we championed was really looked down upon. And we saw it with Hall & Oates. When we started citing them when our first album came out, people used to make fun of us. They were just like, Oh yeah, the guys with the mullets and the mustaches. And now, Hall & Oates is a Pitchfork band. And I think we — I think the relentlessness and the consistency of our career had something to do with rehabilitating the black ’80s musical heritage or the funk ’80s musical heritage.

And there’s a long way to go. There’s still so much of that to dig into.

Yeah, because everybody likes Prince, and Rick James kind of got a bit of a shine when Chappelle’s Show incorporated him, but there’s so much more to Rick James than the leather pants and the cocaine tales. You know, he’s actually a lyrical genius and artist and virtuoso. But again, you can’t control how people perceive things. We do our music as honestly as we can and hope that people keep appreciating it.