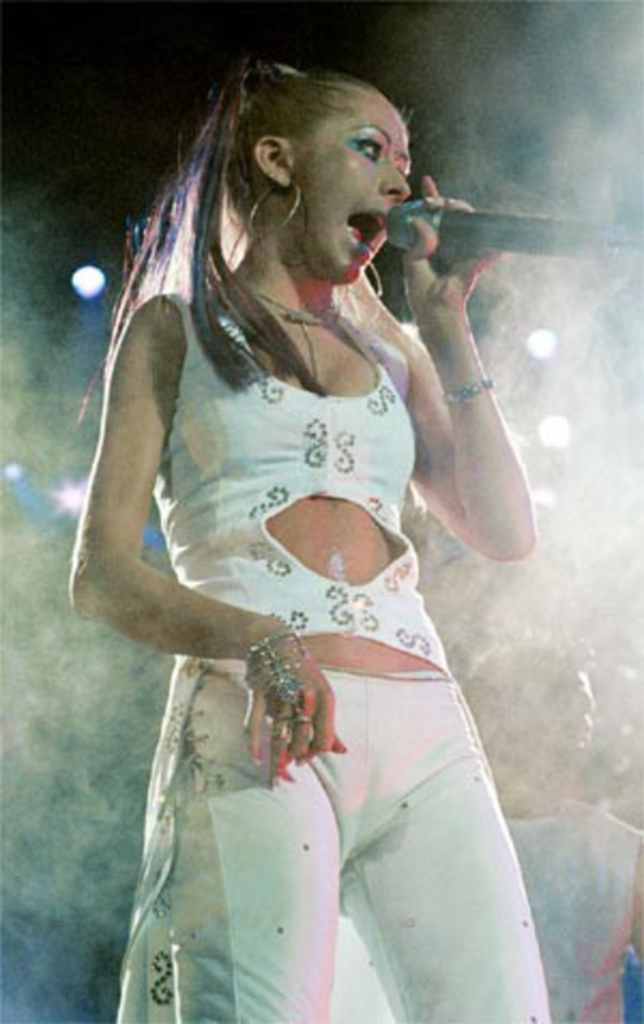 The kickoff date for Christina Aguilera‘s first headlining stadium tour drew a diverse crowd to Sandstone Amphitheatre, with shrieking grade-school students; parents serving as patient chaperones; other adults who secretly enjoy Aguilera’s easy-listening ballads; just-imitating Slim Shadys who came to holler, “God, she’s hot,” at the object of their idol’s derision; and teens, about a quarter of whom were African-American, showing up for the crooner’s coming-out party. Granted, a sizable contingent of the audience came mostly for multiplatinum openers Destiny’s Child, and plenty of fans trickled out to the parking lot after that female supergroup’s set came to a close. But still, those who remained strived to set a new standard for encouragement, with cries of “Sing it, girl!” and “Christina, Christina!” wafting into the air from seemingly every row of the packed venue.

Aguilera justified their love by starting her performance with her breakthrough hit, “Genie in a Bottle,” which featured a prelude packed with rotating lights and lots of smoke. Aguilera emerged in an all-white outfit, her artfully arranged, extension-enhanced hair trailing behind her radiant, glitter-splattered face and her bare belly gleaming as if it had been freshly greased. Her band took “Genie” in different directions, giving Aguilera a chance to showcase her mammoth voice during the breakdown.

Unfortunately, despite her impressive assault on the upper scales, plenty of support from her gifted backup singers, and another breakdown that allowed her a forum for scat-style improvisation, Aguilera couldn’t bring sufficient life to the limp “Somebody’s Somebody” or the forgettable “So Emotional.” Her band contributed some mild funk, and her dancers punctuated their jumping jacks with claps like aerobic instructors at the peak of an endorphin rush, but the spectacle still wasn’t sufficient to salvage these sappy songs. Aguilera’s incredible vocals gave a jump start to the pseudo-sultry “When You Put Your Hands On Me” before she slowed the pace to dedicate the maudlin Dianne Warren tune “I Turn to You” to the crowd. It was touching, given that Aguilera seems to have a genuine affection for her fans, but when hearing her sing For everything you do it was hard not to imagine this tune serving as mood music in an especially sentimental Budweiser ad.

Aguilera’s explosive rendition of an Etta James standard provided the evening’s highlight, making the few blues fans in attendance even more mournful that the comparatively soulless teen guitar phenom Shannon Curfman is being touted as the genre’s next star while an artist who possesses the potential to become a true blues legend has chosen to conquer the pop world. Backed by a piano and, toward the end, the whole band in sporadic bursts, Aguilera displayed remarkable range and breath control, convincingly silencing any skeptics who still doubted her talent.

After this magical moment, things came crashing back to reality as Aguilera left to change outfits and a DJ filled the interlude by spinning current hip-hop hits while dorky high-school-graduation-video-style graphics accompanied his image on the stage’s three video screens. For the next tune, Aguilera came as close as she can to rocking, growling her way through an over-the-top cover of Free’s “All Right Now” that gave Rod Stewart’s version a run for the money. She seemed hyper during this upbeat number, prancing and jumping with previously untapped enthusiasm. Alas, the tepid ballad “Love for All Seasons” slowed the crowd’s collective pulse before her bombastic remixed version of “Come On Over,” complete with pyrotechnics and Spice-Girls-“Wannabe” rapping, brought the set back up to a boil. Unsurprisingly, Aguilera performed her smash “What a Girl Wants” as the encore, and thousands of girls (and a few guys) loudly sang along, proving that on this night, the genie had granted all their wishes. What a few discerning critics in the crowd want, however, is for Aguilera to lend her talents to better songs instead of settling for the ballad-for-hire tripe that should be reserved for lesser lights who don’t deserve better material.

Sporting noticeably better tunes and, in fact, a flashier band and dance troupe, Destiny’s Child did all it could to steal the spotlight. The group hasn’t been a trio for long (in fact, the promotional “Bills, Bills, Bills” fake money it tossed into the crowd still featured Farrah, the departed fourth member), but nothing seemed lacking in the group’s smooth delivery of hits such as “Say My Name” and “No, No, No.” Beyonce Knowles had the dominant voice, while Michelle Williams and Knowles’ cousin Kelly Rowland smoothed out the harmonies. The group changed outfits three times, preferring glamorous gowns for the slow material and much skimpier fare for the dance numbers. Like Aguilera, Destiny’s Child’s finest moment was an ode to the past — in this case, a powerful a cappella rendition of the gospel tune “Jesus Loves Me.” However, unlike Aguilera, this group writes its own lyrics, which lends songs such as “Independent Women,” a track destined for the Charlie’s Angels soundtrack, a valid sense of empowerment. And Destiny’s Child’s capable funk players were willing to tinker with the recorded versions of the songs, resulting in an appealing stripped-down version of “Bills, Bills, Bills” and a frenetic performance of “Jumpin’, Jumpin’.”

It’s become standard for an up-and-coming teen sensations to introduce themselves with short sets to the capacity crowds that gather to see the big names, and Before Dark provided tonight’s brief showcase. With their microphones held in hip-holsters, these three young women (Mia, Arike, and Jeni G.) engaged in some slick choreography with their dancers, including a WWF-worthy fake fight with roundhouse kicks that touched only air. Not only did Before Dark perform its hit “Monica,” a tune about a woman scheming on another’s man that the group claimed was inspired by Ms. Lewinsky, but it followed it up with a remix version that paired the now-familiar lyrics with a new backdrop. It was a decent, unspectacular effort, but the true test of Before Dark’s talent will come when the band makes it big enough to have an experienced band at its disposal. On this night, Destiny’s Child made the best use of its resources, while Aguilera’s set suggested her finest work is yet to come.