Christian and pagan, God or goddess 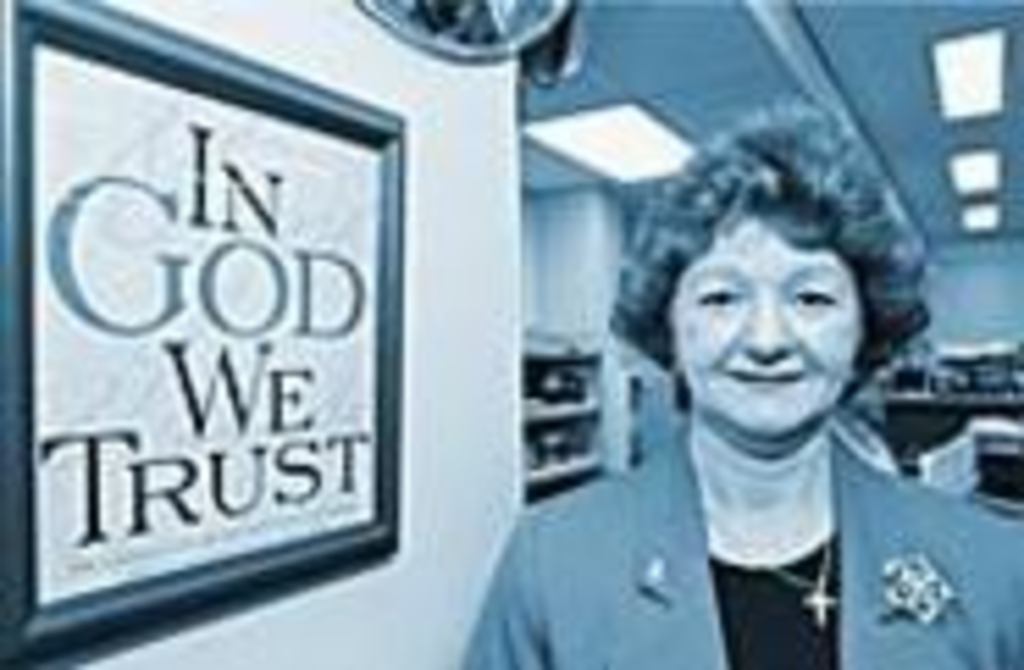 Each night, Mary Lou Schmidt spends a few moments in quiet reflection, seated before a self-made altar of the Egyptian mother-goddess Isis. Dolphin print fabric, a gift from a Christian friend, drapes the table. Items of personal significance decorate its surface — candles; a crystal; a pyramid; a Native American rattle; statuettes of Isis and Thoth, the Egyptian god of wisdom; and a 1982 photo taken in Salina of Schmidt with singer-songwriter John Denver.

The time Schmidt spends in prayer, meditation, and reflection before her altar are intensely private, bringing her peace and a break from her demanding job as a nurse. Schmidt practices paganism — a nature-based religion as old as humanity.

Pagans recognize many types of deities, and their ways predate Judeo-Christian traditions. Though no two pagans may worship the same gods or in the same fashion, Schmidt says, they share similar beliefs about the importance of caring for the environment, treating others with respect, and tolerating those who believe differently. “I consider all spirituality important as long as it does no harm,” she says.

However, Schmidt says, harm was done when Shawnee County Treasurer Rita Cline hung posters featuring the national motto, “In God We Trust,” in several county offices around Topeka. Schmidt’s concern about the posters’ message has led the Kansas and Western Missouri Chapter of the American Civil Liberties Union to formally request that Cline remove them from all public spaces and may result in a suit against Cline in a federal district court. The ACLU’s case and Schmidt’s concerns stem not so much from the actual content of the poster but, as the ACLU states in a May 24 press release, center “on the motivation underlying the placement of the poster by County Treasurer Cline.”

The organization’s legal director, Lisa Nathanson, says, “We are convinced that Ms. Cline hung the poster for one reason — to promote her own religious beliefs.”

Cline has refused to take the signs down, stating in a letter to Schmidt that the ACLU is a “God-less organization” and calling Schmidt herself “a very unhappy person.”

The conflict began six weeks ago, when Schmidt saw a local news report about Treasurer Cline’s placing the posters in the White Lakes Mall motor vehicle annex and in her offices at the Shawnee County Courthouse.

“To me this is kind of scary, having an elected official making a big deal putting up this (poster) in a public area,” says Schmidt. “It’s scary because it’s the government involved with religion and it’s not supposed to be that way…. The main thing I fear is I don’t want government to be pushing religion on anybody.”

Schmidt contacted Cline after seeing the news report, and Cline called her back. During their April 14 phone conversation, Schmidt explained her pagan philosophy. “I told her if she was going to put up a national motto, why didn’t she use the original one, ‘E pluribus unum,’ meaning, ‘From many, one,’ which honors diversity, instead of divisiveness,” says Schmidt. “Or perhaps ‘In goddess we trust’ to honor us pagans,” she adds jokingly.

“I told (Cline) ‘In God We Trust’ was not my motto, because I did not believe in God (to which Cline replied, Schmidt says), ‘Then you must not be an American citizen.'”

“She actually said those words to me,” Schmidt recalls. “That’s when the conversation just stopped. I don’t take that from a regular citizen, let alone an elected official.”

Following their phone conversation, Schmidt wrote a letter to the Topeka Capital-Journal about her concerns over the poster and Cline’s comment. The newspaper, says Schmidt, never published the letter.

To her surprise, Schmidt received a follow-up letter from Cline on official Shawnee County letterhead. In it, Cline reiterated her statements questioning Schmidt’s patriotism: “I understood you to say you are a pagan, do not believe in God, and refuse to recognize or honor the American flag and our national motto, all while claiming to be an American citizen. Your statements surprised me and caused me to question your patriotism and wonder just how much of an American you really are.”

Cline also included a statement Schmidt feels condemns her: “… for those who live as if there is no God, for the sake of their eternity, they’d better be right!”

“She’s telling me that I am going to go to hell,” says Schmidt, “and then signs it, ‘Sincerely, Rita Cline.'”

Cline’s letter also alludes to her intentions in hanging the posters: “… because the ACLU and a few other God-less organizations have been somewhat successful in having the Ten Commandments removed from public buildings, I have chosen to frame and hang … the national motto … I dare you, the ACLU, or any other organization to try and force me to remove it from the offices.”

Schmidt faxed Cline’s letter to the ACLU’s regional office in Kansas City, Mo. Says Nathanson, “I’ve got 20 messages a day waiting for me on voice mail.” But when she received the fax from Schmidt, Nathanson was stunned.

“The combination of the hanging of the poster and the letter that was sent to Ms. Schmidt was clearly a First Amendment violation; I can’t imagine anything more inappropriate as commingling government with establishment of religion. If the government had hung the poster and had taken no other action, it might not have caused this reaction, but this is a different case entirely,” Nathanson says.

In a letter dated May 12, Nathanson and executive director of the organization’s Kansas City, Mo., office Dick Kurtenbach asked Cline to remove the posters and to “cease and desist from using your government office to disseminate your religious beliefs. You must stop pursuing a public policy that equates patriotism with faith in God or any other religious tenets.”

“This is just a situation that we felt we had no choice but to take action,” Nathanson says, adding that in pursuing the case, “We made sure that we were not just having a knee-jerk reaction to that dare.”

On May 20, the ACLU’s local board of directors met and authorized Nathanson to pursue legal action against Cline.

Cline says she’s confident that her cause would prevail over any litigation from the ACLU. At first she was even eager to take the issue to court, saying, “I am just dying for them to file this lawsuit. If they can’t come up with the money I might help them scrape up the filing fee, and I would strongly consider countersuing. And if I was awarded any money I would give the money to charity.”

A few days later, Cline reconsidered. On May 22, she sent another letter to the ACLU and to Schmidt inviting them to meet with her and her pastor, Gordon Shipley, to “dine as my guest and discuss your allegations and requests.”

The ACLU declined the invitation and advised Schmidt to refer Cline back to them if the treasurer tried to contact her again. “For (Cline’s) own protection, and for the sake of legal propriety, she needs to communicate with us through her legal counsel…. We would be more than willing to negotiate; we just have to do it though the legal parameters,” Nathanson wrote in an e-mail response.

Cline says she is a Christian and, as such, is concerned with the eternal fate of the souls around her. “I describe myself as a person that loves everybody and everyone and as someone that is trying to make this world a better place to live in,” she says.

Clines says that while listening to American Family Radio broadcasts, she heard about the posters. For a $30 donation, Cline received nine copies of the 11-by-14-inch posters from the American Family Association (AFA), which produces the AFR broadcasts. The AFA is a conservative Christian organization based in Tupelo, Miss. Its mission statement says that its members hope to “inspire and equip individuals to restore the moral foundations of American culture.”

On the poster, the word “God” appears in a different color from the rest of the text. AFA president Don Wildmon states on the group’s Web site that in developing the poster, “I got to thinking the other day about doing something which would give the ACLU fits and at the same time present a situation about which they could do nothing. In other words, accomplish the same goal as posting the Ten Commandments, but do it in a way which would be upheld in any unbiased court in the land.”

Cline echoes Wildmon’s sentiments in her letter to Schmidt and insists, “I am not taking those posters down. If I want to put them up, I will. I figured that no one would object to the motto that can be found on the very currency that I am mandated and obligated to collect.”

A Democrat, Cline has served as Shawnee County Treasurer since 1988. She says she was raised in the Catholic Church but now is part of a Pentecostal congregation. “If we are Americans, we need to be loyal,” she says. “When somebody tells me that they are not going to honor the flag or honor the national motto, it surprises me.

“I told (Schmidt), ‘Aren’t you an American citizen? I find it rather conflicting that you are refusing to honor the flag or the national motto; apparently you are not too patriotic.'”

Schmidt, however, does not equate patriotism and citizenship with her unwillingness to honor a flag she says flew over American troops who massacred Native Americans or a national motto that to her reflects a Judeo-Christian faith. Schmidt says she votes regularly, writes her congressmen, donates her Rh-negative blood six times a year, and hosts a “Clean Up Mother Earth Day” in Topeka’s Gage Park on the Saturday before Mother’s Day. “I am a very political person. My husband and I raised our daughters to be very political, to be involved in what’s going on, and to pay attention to what is going on,” she says.

Schmidt says she would be willing to fight for someone’s right to choose what to believe. “Would you be willing to do the same for me?” she asks.

“Our boys did not die for that flag or a national motto. They died for the right to have freedom of speech, freedom of religion, and freedom to think on your own and not have someone telling you what to think.

“I am involved in making a better country for our children, for their children. How much more patriotic can you be?”