A chat with Chris Thile, who will be in town for Live From Here at the Kauffman Center on Saturday 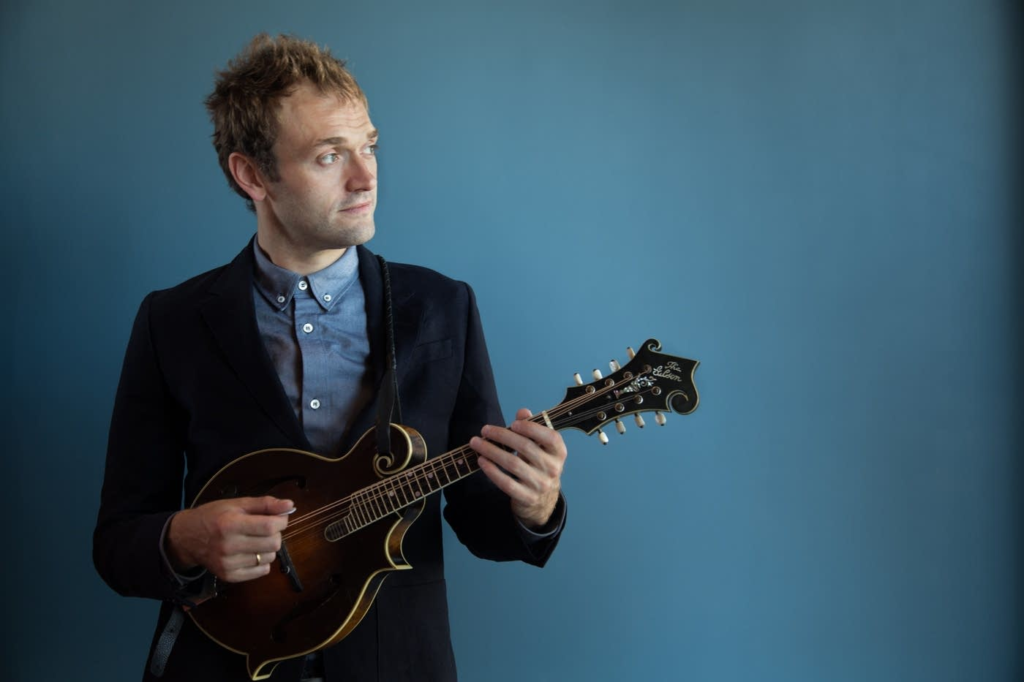 Musician Chris Thile is only 37 years old, but he has been playing music in public for 30 years. Thile was part of the wunderkind bluegrass trio Nickel Creek, formed Punch Brothers as Nickel Creek was winding down, and is now the host of the public radio program Live From Here.

That show — formerly known as A Prairie Home Companion — has evolved under Thile’s tenure. While it still indulges in the comedy skits and such of its previous incarnation, Live From Here is now much, much more of a musical program, with Thile bringing in musicians beyond the bluegrass, folk, and jazz worlds — Cat Power, St. Vincent, and the Dirty Projectors, to name but a few. It’s become a bit of destination radio, a place where you can hear the likes of Lindsey Buckingham perform a fingerpicked version of “Never Going Back Again” as well as a “public service announcement” regarding the state of PEZ.

I spoke by phone with Chris Thile about the show’s evolution, focus, and his musical life ahead of Live from Here‘s upcoming broadcast this Saturday, January 12, at the Kauffman Center for the Performing Arts.

The Pitch: The show has been called Live From Here for a year now. Do you feel like it has been embraced by people under the name change?

Chris Thile: Oh, wow — you’re right. I hadn’t even thought of that, but you’re right. Yeah, I do. Everything keeps going well. That was a very difficult time, obviously. I guess that’s all there is to be said about that, without making this and seven other follow-up interviews 100 percent about it.

The show is certainly more music-focused than it used to be, and that’s a very natural development, given that I’m sort of at the head of things. But, yeah: I feel great about where things are. I feel when I’m walking through an airport, more people are coming up and saying that they’re listening to the show. I was walking around New York City, and on the subway, I think at this time of year, last year, and it was less so.

I really agree. It seems like it’s developing a sense of itself. You have a wide-ranging set of guests, both musically and comedically. How involved are you in curating the musical guests and comedians which come on the show?

The musical guests — like, 100 percent involvement from me. Every single one. I love music so much. I love listening to it, and I love sharing the things that I love with other people, so that’s sort of a dream part of the gig for me. Plus, it has really given me an opportunity to get back in the listener’s chair and just be a music fan.

Now, I just listen to music, because I love music and it makes me feel better about, you know, life. I get to stand on the stage, and like — just this last week, with St. Vincent and Jon Batiste and Jim Gaffigan, I can stand on the side of the stage and just open my ears. I’m not on output for those moments. I’m on input, finally, and it feels so good.

As someone who wakes up with a weird feeling in the pit of his stomach — “If I don’t get a certain amount of work done today, I won’t be able to sleep tonight” — this show grants me a reprieve from that feeling: “Right now, your job is just to open your ears and listen to what other people are doing.” I really, really love that part of the job.

Do you find that having a working stand-up comic, Tom Papa, as your head writer, helps you to bring in interesting and diverse voices in comedy, as well?

My hat is way off to Tom Papa on the comedy front. I love comedy, but can’t say that I have any business booking comedians on a musical variety show. [laughs] Thank god for Tom and our creative director, Joey Ryan, and our comedy booker, Rochelle. They do a wonderful job on that front, and I’m really lucky.

I do think, basically, the show has this self-propelling potion that’s two drops of music and one drop of comedy, and there’s this chemical reaction in the pot, and it’s just like, two hours is gone in the blink of an eye. The music makes the comedy more funny and the music makes the comedy more poignant, and it’s a real pleasure to be a part of it.

As a person who has to do a certain amount of work or else you can’t sleep, and with this show that happens whether you’re ready or not, do you find that it helps you when it comes to something like writing the Song of the Week?

Yeah. Yeah, yeah, yeah. You, as a writer, know this as well as anyone: a deadline is a powerful source of inspiration. [laughs] It is exactly the same — there is a lot of very unnecessary hemming and hawing that goes into the creative process, where you’re just kind of sitting there, turning something over in your mind, but not really accomplishing anything, just because you have the luxury of the time to turn it over.

There can be a very self-indulging aspect to the very important concept of “revise, revise, revise.” I’m not revising any less. These Songs of the Week go through pretty intense revision. That’s not to say that they always end up on the show the way I get to them later, if I have the luxury of performing them divorced from their actual week.

But I’m a compulsive reviser, sometimes to the detriment of the music that I make. I think I can revise something right out of its power to affect people emotionally. I can dot ‘i’s and cross ‘t’s ’til there’s actually no space on the paper. I just wrote something where my deadline was much further off and the show, I think, has really helped.

My process is a little healthier, now. I think, “I need to work. I need to get this done. I need to have something to show for this time.” Oftentimes, that’s stripping music away from an idea, and others, it’s adding to it, but oftentimes, when I just have unlimited time to work on something — well, not unlimited, but not imminent deadline — I’m really just screwing around, creatively. Just taking taking various cars for a test drive, way beyond what I need, and I end up right where I started.

I’ve learned that sometimes, I have a place that I need to be, and this car is going to be just fine. Let’s go. Then, you carefully drive the car to your spot, and, lo and behold, you’ve made it to your destination. That’s the point of art. Our skills and our ideas give us this car, but the question is: Can we get where need to be with that car? I know, right now, on Saturday, I need to be at Town Hall on 42nd between 6th Avenue and Broadway, with a new song, and that song has to be good. That’s my destination.

Live from Here will broadcast live from the Kauffman Center for the Performing Arts this Saturday, January 12. The show features special guests Mandolin Orange, My Brightest Diamond, Judy Gold, and Gaby Moreno. Details on that show here.