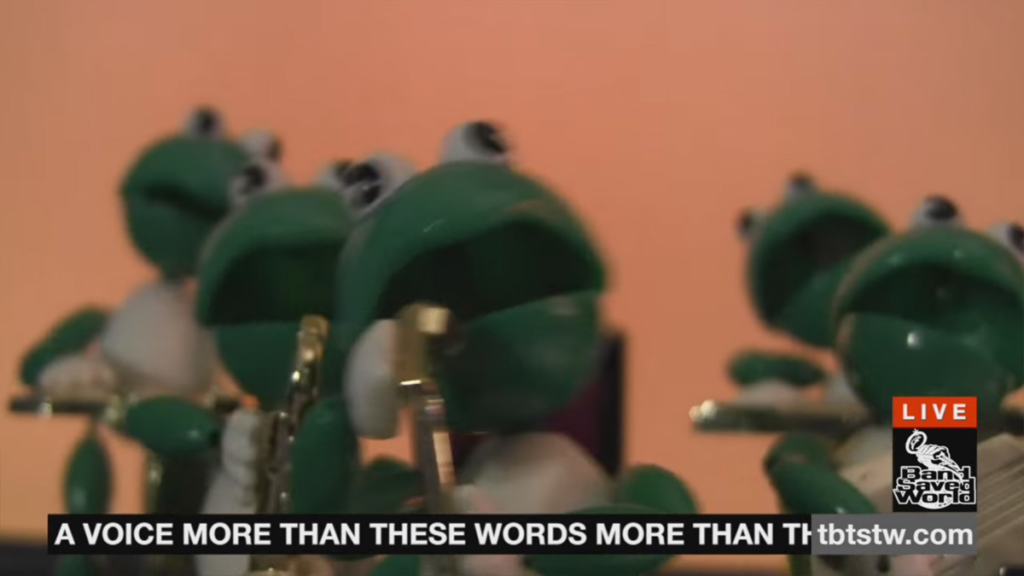 Somehow, the vast majority of this roundup all came in immediately after we posted last month’s installment. Happily, there are some gorgeous visuals from rock acts such as Chris Crabtree, Chris Meck & the Guilty Birds, and Berwanger, the Uncouth’s street punk, and a funky newscast from the Band That Saved the World.

The Band That Saved the World, “Shiny Plastic People”

For real: this is a funky-ass track, but the video’s either the most ridiculous thing we’ve seen in a while, or the most brilliant. It’s a bunch of toy — frogs? lizards? — toy animals playing the band’s new songs. Then things get all warped and trippy. In the end, the song is catchy and danceable, the video’s silly and fun and dumb, and we’re pretty glad to have the Band That Saved the World back on the scene. We hadn’t known how much we missed them. You can download the track over at Bandcamp.

Chris Meck and the Guilty Birds, “Brave and Reckless”

Taken from Meck and the Birds’ It’s 4 A.M. Somewhere, “Brave and Reckless” is a sparse and pretty, but somewhat menacing bit of rock ‘n’ roll. The vocal interplay between Meck’s rough-and-tumble voice and the rather more sweet singing of bassist Calandra Ysquierdo and drummer Michelle Bacon helps lend the song its dynamic feel. The video, directed by Andrew Rolston, manages to capture the band’s dark and lovely nature, while also nodding to its every so slightly retro approach.

At the end of August, KC’s finest street-punk purveyors dropped its first proper album. That EP, Jonesy’s War, is six tracks of punk rock ‘n’ roll, and bears the influences of the class of ’78 quite proudly. At the release show for the record — out now on Teenage Heart — the band paid homage to one of those influences, in the form of this ripping cover of the Blitz classic “Someone’s Gonna Die.” Check out the event page from the Record Bar show for a video of the title track, as well.

This is the first single from Songs from the Edge of the Sky, Crabtree’s forthcoming EP. It’s a lovely little piece of pop Americana, and the video — shot on the downtown streetcar — looks beautifully sun-washed. Like the song itself, it’s quietly slow and charming, and we’re eager to see what the rest of the songs bring. At Crabtree’s Bandcamp, you can snag “Easy” in its original version, as well as an acoustic take.

We’ve been able to listen to Berwanger’s upcoming LP for Doghouse, Exorcism Rock, for the past month, and it’s been excruciating to wait for an official release to share some of these cuts with you. Thanks to the band’s label for releasing this video in time for the latest roundup, because it is wonderful. The band’s frontman sent it out to all the kids who used to hang at Gee Coffee and the Daily Grind once upon a time. Given the preponderance of footage from the ’90s that Josh and his friends shot, you may just see some embarrassingly mall-banged footage of yourself. You’ve been warned.