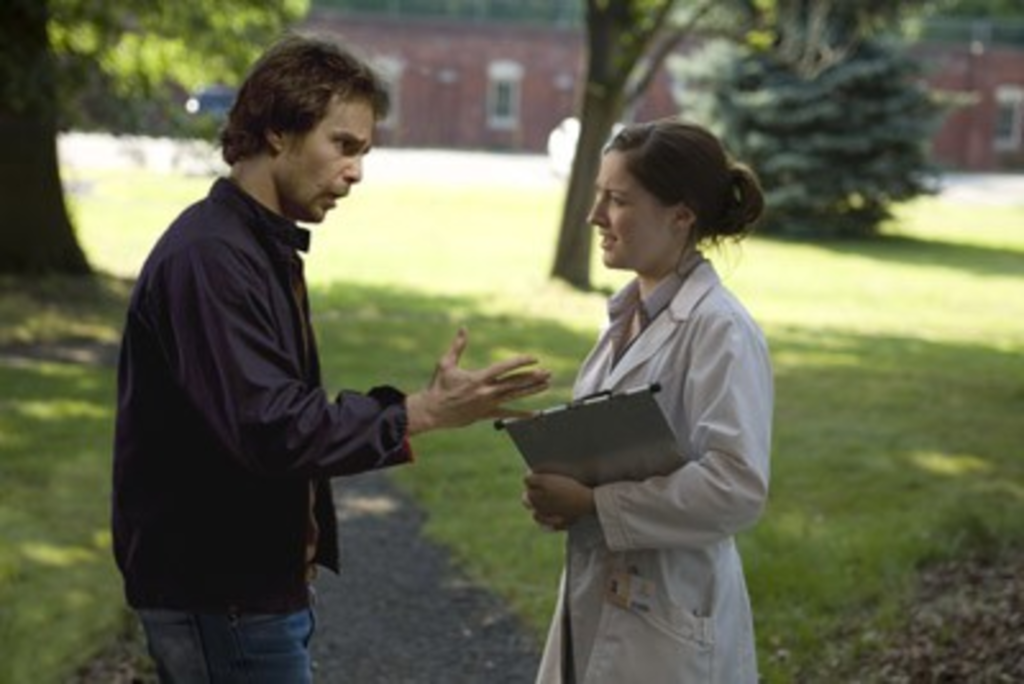 There’s a whole lotta fucking going on in Choke, Clark Gregg’s adaptation of Chuck Palahniuk’s first-person novel about a sex addict named Victor Mancini with severe Mommy issues — fucking in a cramped airplane bathroom, on a haystack, in a hospital chapel, even. There are sweaty flashbacks and splayed-out flash-forwards, too. The only time someone’s getting laid in a bedroom is during a staged rape scene played for laughs, the biggest one when Victor (played by Sam Rockwell) shoots his load all over the bedspread of the anal-retentive “victim,” who’s then furious because the dope who can’t do dick right has made such a goddamned mess of things.

If you couldn’t tell, this movie is awfully proud of itself; I’ve never seen a grin so smug plastered on a cineplex screen before. Gregg — the actor currently yukking it up on CBS’ wildly overpraised faux-Seinfeld spinoff, The New Adventures of Old Christine — is credited as writer and director. But as the writer, all he’s done is shuffle around some scenes (the book’s first is now toward the film’s end) and rendered the story stickier with sentiment. In the end, Gregg and Palahniuk wind up in the same place — with a dude for whom doin’ it just ain’t cuttin’ it anymore.

What’s most unsettling is that Gregg turns this original piece of work — if nothing else, Palahniuk’s the franchise player when it comes to crazy nihilism — into something that feels terribly familiar, even worn-out. Mancini’s jittery narration, as penned by Palahniuk, has the same effect as the sound of glass shards scraped across a mile of chalkboards: It frays your last nerve ending and wears you out till all you can do is breathe the sigh of release by novel’s end. In Gregg’s soft hands, the story is just sitcom gymnastics — slick joke-telling absent the emotional resonance that comes with submersing yourself in someone’s self-induced shitstorm.

Perhaps that’s because we’ve seen Sam Rockwell in roles like this before — the frazzled fuckup who always looks stuck somewhere between deadpan and dead (imagine a hornier Chuck Barris from Confessions of a Dangerous Mind) — which is why his turn as a normal dad in last year’s underrated Joshua was so blessedly welcome. At last, normal. Here, he’s just an emotionally disconnected Colonial America theme-park employee who, in his spare time, ditches sexaholic meetings to screw one of his fellow addicts on the bathroom floor; good thing he’s her sponsor. The only emotional connections Victor makes are with the strangers who come to his rescue whenever he fakes a choking incident in a restaurant — hence, the title. The gag, as it were, serves two purposes: It’s a good way to squeeze a few extra bucks out of a sucker who feels sorry for the choking victim, and Victor likes the way it feels being cradled in the arms of a savior. It’s as close to love as he gets.

Victor has but one friend: Denny (Brad William Henke), a chronic masturbator when not bound in the theme park’s stocks. Denny actually wants to get better; he craves sanity and domesticity, which he ultimately finds with a stripper named Cherry Daiquiri (not her real name, she reminds). Victor just wants to fuck and forget — and he’d especially like to stop thinking about his mom (Anjelica Huston), caged in a loony bin where half the time she mistakes her son for her attorney. And then there’s her doctor, played by No Country for Old Men‘s Kelly Macdonald, who claims she can save Victor’s mom by screwing Victor, preferably beneath the watchful gaze of a crucified Christ. They are all screwed.