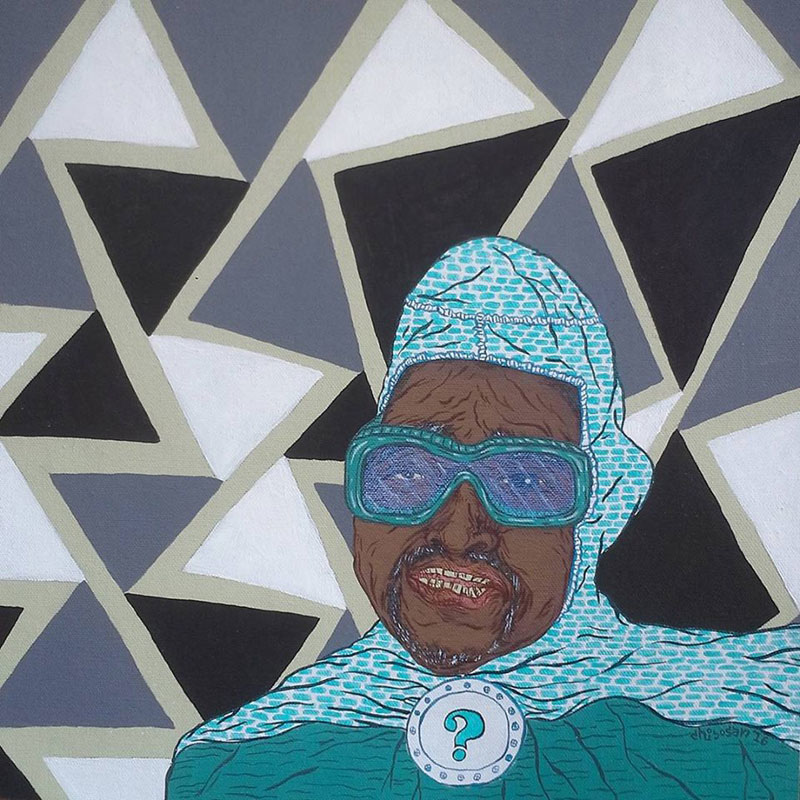 Our fearless hero has arrived!

He swoops down in his speckled teal cape, goggles on. But wait. His insignia is a hesitant question mark, and it’s pinned to the front of his costume. And that smile. It’s a slack-jawed grin inside a halo of graying facial hair. He sees we need protection, and he roars. “Duuuhhhh,” he says.

Maybe Dr. Dumb’s sidekick will be the one who defeats the vile Human Turd, that corpulent, brown-caped enemy of do-gooders. Yes, maybe Mr. Craptastic, with his narrow but relatable superpower — being lousy at his job — can halt this chaos.

No, it won’t be Mr. Craptastic, either.

Here, then, is another day in the anarchic mind and art of Chico San, who wants to show you something weird, whether you want to see something weird or would rather not. His art trips you, sends you down a hole to a Bizarro world, then laughs as you try to claw back up to your own reality (as though you’re safer there). In his underground are hybrid monsters and blundering genetic misfires — a bristling menagerie now on display at Uptown Arts Bar.

In Superzeros, San sets out to explore the boundaries of good and evil. The eight characters in these painted portraits include Confederate Jack, in stars-and-bars suspenders, and someone called the Frothy Surfer, happily encased in a coat made of … testicle skin? Coward the Duck wears camouflage against a camouflage background to avoid being seen, a pained wail smearing his face. The images — held in clunky, garish frames mounted at a slightly antagonistic forward tilt — showcase San’s gift for the details of disgust. The translucent skin draped loose over tiny blue varicose veins, the stray hairs tucked into the folds of a face. The cracked yellow teeth inside gaping-maw mouths.

The accumulation of these details provides its own narrative, though San doesn’t wait for you to catch up before taking a sharp turn in another direction. It’s easier to say where he’s not going, perhaps, than where he is. This isn’t shock art. It’s not political cartooning. And it’s certainly nothing meant for blue-chip collectors. But it’s also not without beauty. Behind each portrait, San paints attractive and stable patterns to anchor the wild lines in the foreground. I’m partial to the braided ropes behind Bat Cray, plump and detailed fibers stroked by thick and thin lines. A steely blue behind the ropes coolly contrasts Bat Cray’s blood-red suit and malevolent smile.

Superzeros’ foregrounds, meanwhile, feel better organized than seems obvious at first. As these players face off across the room, four against four, you understand that you’re in an arena of incompetent gladiators, dressed in impractical costumes and spouting useless rhetoric. Look at Professor Yuh, at that villain’s familiar blond hairpiece and his gloating expression. Silly? Dangerous? Both? Also: underestimated.

Meanwhile, unlike the grotesques in Superzeros, San does have a potent power: the ability to repel. Like the comic-book heroes that fall in for satire here, though, he also has a secret identity: He’s a great painter.