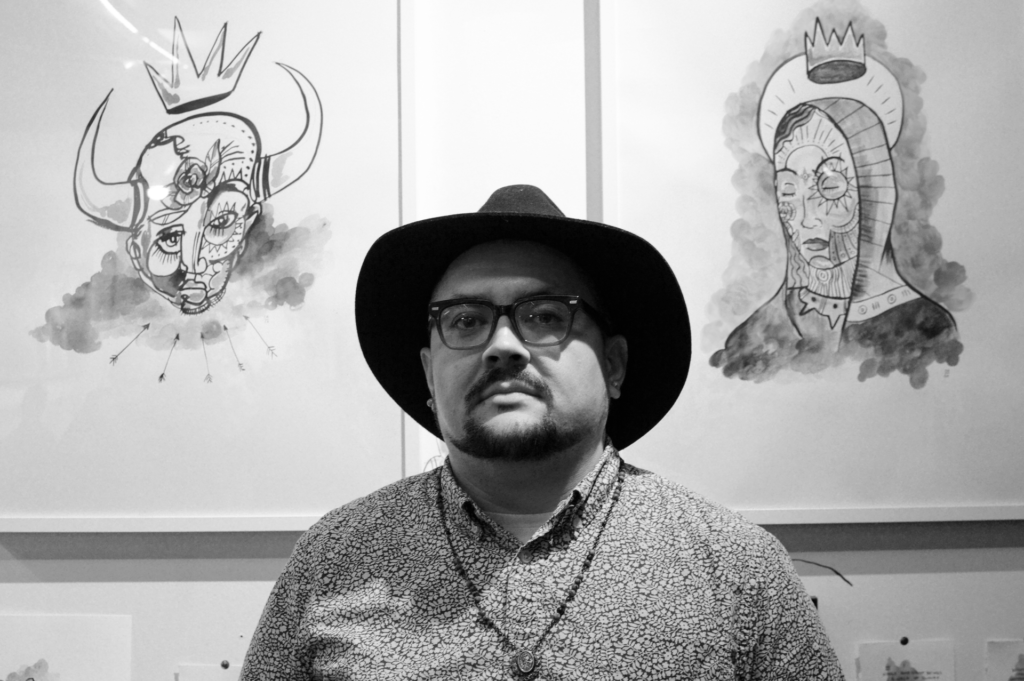 So says Chico Sierra, who is called Jason on official documents and uses “Capitán” as a middle name on social media, and who is telling the truth.

Sierra has met me inside the Garcia Squared Contemporary gallery, a room inside the Bauer Building that has again achieved calm in the days since the most recent First Friday. The echo of the few people walking the wood-floor hallway outside is faint, our only audible reminder of the rest of humanity.

On one wall are Sierra’s watercolors — in mostly primary colors, with the occasional earth tone to set off a bright emerald green. The art here is a coalescing work in progress that began before a March 3 opening and collectively tells an insular narrative involving two main characters. One is a bull, the other a bird, and they appear to be suffering. They are pierced with arrows. And interspersed with their repeating images is Mary, quintessential mother, representation of understanding and care. 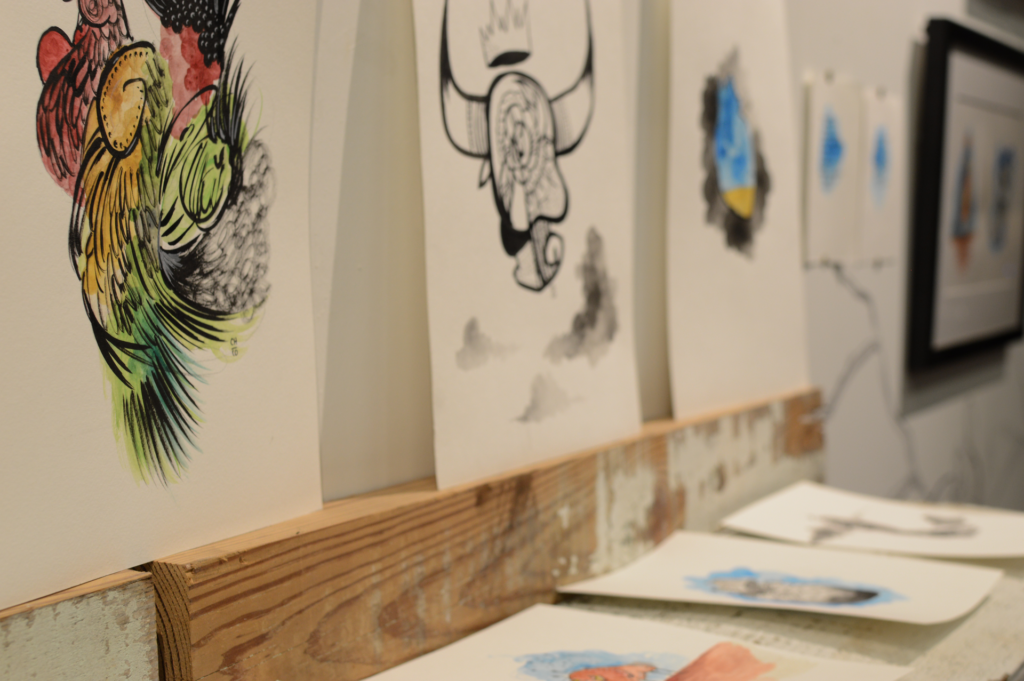 “I have been doing acrylic on canvas for a long time,” he says, talking about his recent shift to using watercolors. (Sierra will also exhibit a piece in Chicano Voice: Heroes, Comunidad and Agents of Change, which runs May 5 through June 24 at the Mattie Rhodes Art Gallery.) “I wanted sort of that illustrative, storybook kind of look. There are characters in this whole thing, representative of two people: myself and this other person.”

He says the story was already there, so the work is quickly accumulating. When he’s at work (his day job is at City Market sandwich shop the Bite), he’s conceiving images that will soon find their way to paper. Sometimes he’s actually painting there, in a basement studio or, recently, on one of the walls. In his home studio, he keeps tools for three forms of expression ready to meet whatever ideas spring to mind: painting, poetry and music.

“If I don’t have a guitar around, I’ll lose my shit,” he says. “Even if I’m not using it, I need it around. Everything I do informs everything else. I am able to clear my head while playing music. It helps inform my work. Writing is the same way. It sort of gets things moving. If I can’t say it with words, I’ll paint it. If I can’t paint it, I’ll say it with words. And if I write a really bad poem, I’ll turn it into a song.”

So what is the story? Self, relationships, experience, he says — ultimately, life. Sharing and learning. The basic desire to be alive, even when your heart is a pincushion or you have unwittingly pushed barbs into someone precious yourself.

“The person who is sort of involved in these pieces, it’s definitely a collaborative effort,” he tells me. “She informed a lot of this work and she conspired, but also, when she sees my stuff she’s had a lot of the same language. The relation we’ve had has been very informative. When she sees my work and says how she feels, it makes sense.”

Sierra believes everyone is creative, even down to the intangible object that emerges from a conversation, especially a coming together over art.

“If someone is explaining my work to me, or how it makes them feel, then they are creating something in my mind, and I can use that,” he says. He isn’t precious or somber about this; he jokes that it’s free therapy. 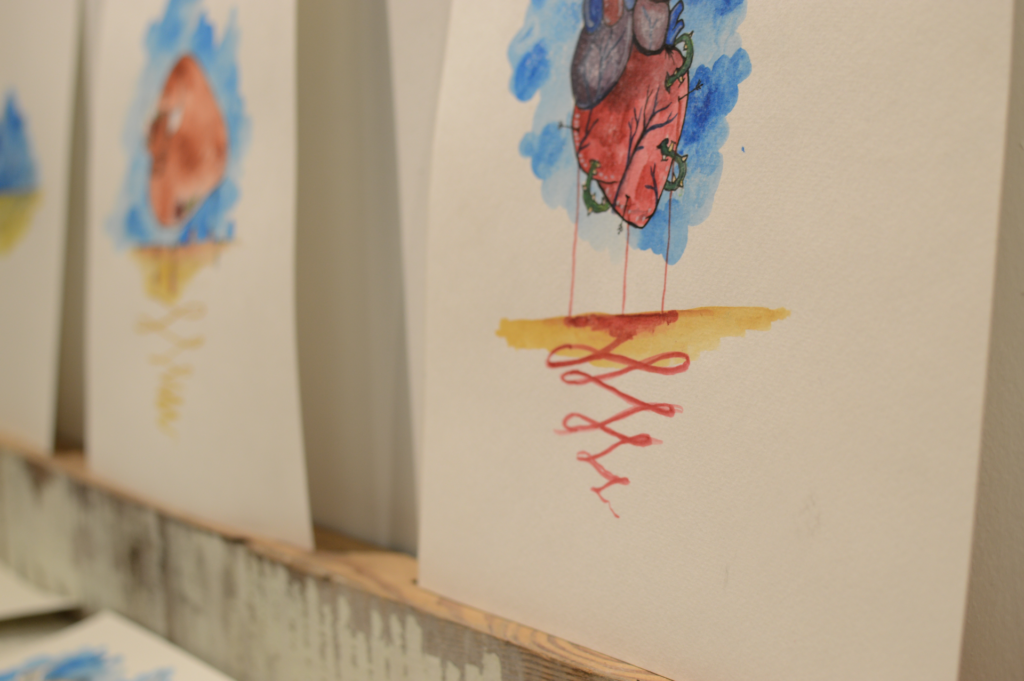 To encourage that interchange, and to mix in other relevant media, Sierra’s display here includes words, some trailing along the tendrils of plants painted on the wall as a backdrop, a loose frame. The words are, in fact, the fruits of the kind of dialogue we’ve been talking about. “I wanted somebody else’s ideas to be there, to talk about it, too,” he says. “So she did what she does. She wrote some poetry.”

The she in this case is his friend Erika Noguera, and one of her striking poems at Garcia is in three parts, blended with the visual work, each little page penned in black block letters and dabbed with cobalt blue. It begins: “Kings and light beings / a halo of clouds / punctuated / sometimes dripping / bleeding / like a heart / will ….. “ Parts II and III describe roses blooming from cacti and Mother Mary’s role in shooting arrows at birds who “fly unheeded / carrying the world ….. while buffalo roam / amidst / the / burning / desert / grass.”

Mary’s image here is serene. She’s standing or waiting, stolid and strong. And while Sierra talks about the hoofed animal as a bull, an icon of Mexican and Spanish culture that represents raw power (and himself) but acquiesces to domestication in order to conduct necessary relationships — to get along in the world — buffalo are similar beasts. The roaming buffalo of Noguera’s poem are native to our continent, even if they may not have dipped as far south as El Paso, where Sierra grew up, and which he describes as “the worst kind of desert.” (He once called a friend to insist that he’d never want to be buried there.)

In any case, the animal — like everything else here — is open to interpretation, and Sierra says he is looking forward to talking to more people about what they see. 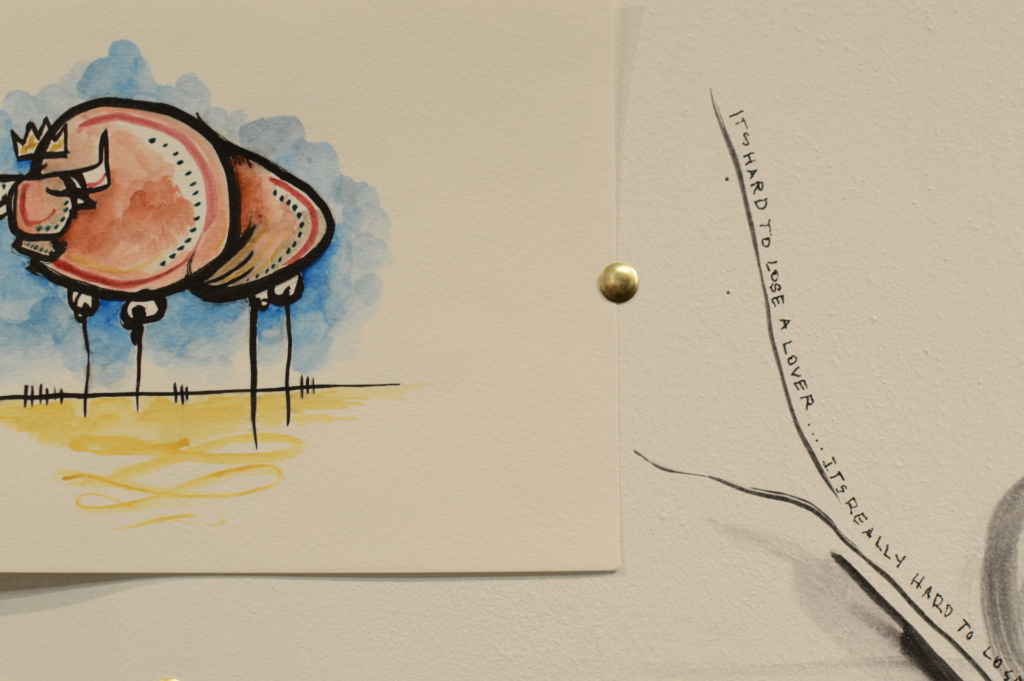 “The heart has always been in my work,” he says. “More than my mind, my heart is out of control and feels like it’s always constantly being torn apart by something. It’s life, and sometimes it’s good and sometimes really terrible. It is exposed. That’s the way I’ve lived my life. I want to deal with all these things, want to express them, not have them locked up.”

Having heard this from him — having been reminded that you can’t do anything when you’re dead — I begin to see the animals on the wall as peaceful. They may be slumped over or lying on the ground, but they are yet alive. They are on pause.

He explains, “Most of the bulls are wounded, the idea of exhaustion. I wanted to speak to the idea of how I felt at the moments when I did want to take my own life. It wasn’t being dead that I wanted, but a break, rest. There’s a sort of exhaustion with my mind and my art and how much I feel about things. I wanted to speak to it … at least to myself.” 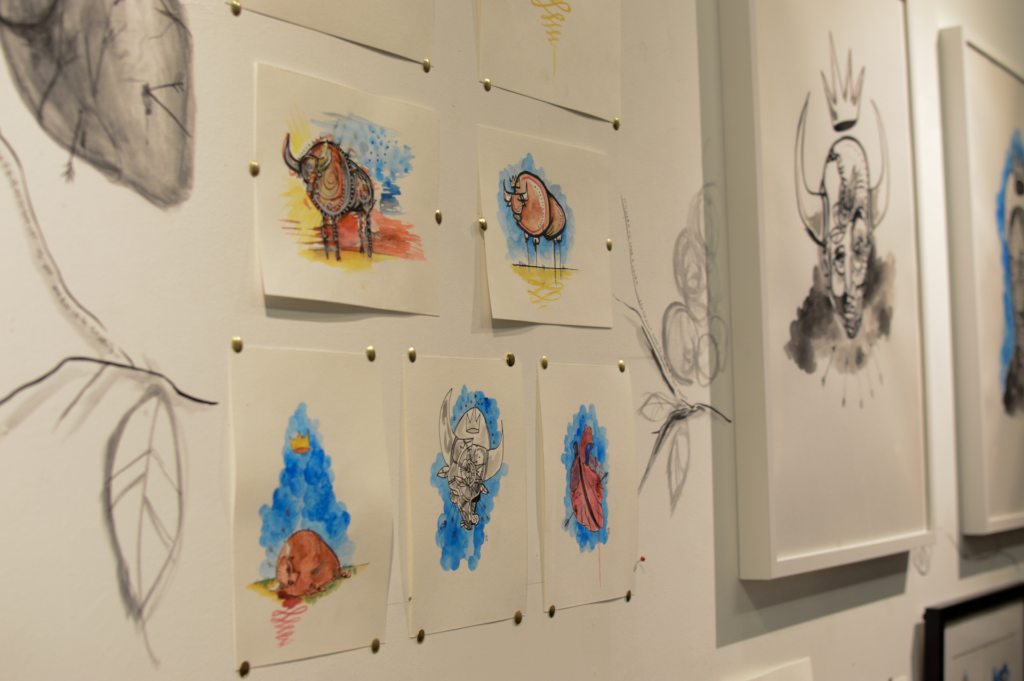 This is not Sierra as the stereotypical long-suffering artist. It is Sierra seeking to transcend, to be honest about what compels us to keep living, to ask the viewer to be equally honest about the need for expression. His art isn’t a provocation but rather an imploring that we stay in conversation.

“I paint because I want people to see it. And sometimes I want people to tell me what they see, so I can understand what I’m trying to say,” he says. “Sometimes you have a feeling and you don’t know what it is. There’s something in your subconscious that’s giving you these ideas, and there’s no better way to know what that feeling is or what you’re trying to say than having other people see your work and tell you what they think. Our minds are all sort of tied up in the same way.”