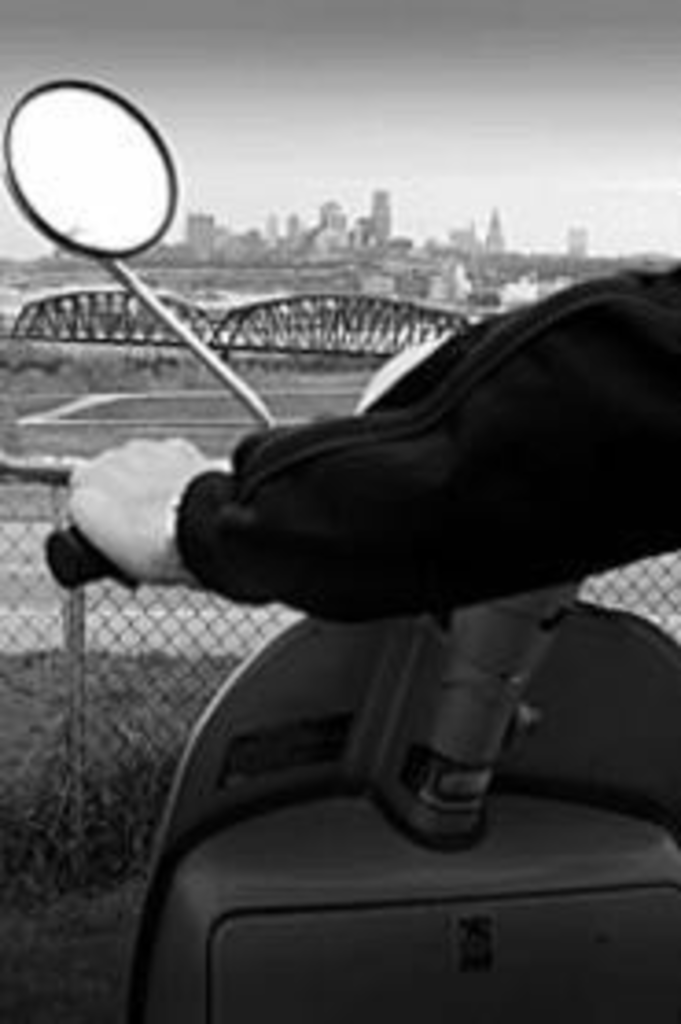 On Sunday afternoons, the riders in the Upsetters Club meet at Scooter Fix, a mechanics’ shop in the all-ages El Torreon nightclub at 31st Street and Gillham. It’s one of many scooter clubs that have formed nationwide. (My favorite club name is the all-girl Secret Servix.) Back when the Upsetters Club first started, in 1998, it was made up mostly of mechanically inclined cowpunk-rockabilly types who got together, fixed scooters and took long, leisurely rides while wearing matching jackets.

Nowadays, everybody’s doing it. Well, not everybody, but lots of people who want an affordable — and stylish — mode of transportation. One that allows them to travel faster than they could on foot or bicycle while enjoying all the pleasures of the outdoors. One that’s less expensive and daredevilish than a Harley and requires less leather. With the repopularization of the Vespa and its ilk, I worried that the scooter community might experience some growing pains. When Scooter World opened, I envisioned Onion-like headlines: “Scooter Fix Enraged By Appearance of Scooter World.” But scooter riders appear unfazed by the vehicle’s newfound trendiness.

That scooter riding and scooter fixing are art forms is well-documented in our area, with extensive video footage tracking the Upsetters’ adventures, not to mention Vespa parts serving as plant stands in one local gallery.

But riding a 1979 Vespa with video artist and photographer Nate Bogert really drives home the artistic side of scooter riding. A notable finder of things, Bogert acquired his scooter in the same way that he has accumulated most of what he values: by considering the potential of stuff that’s not being used, then demonstrating a willingness to bring it back to life.

The Vespa came from a woman he sometimes works with. It was sitting in her garage with only 600 miles on it, clearly having been in a wreck. “What probably happened was someone took it out, got in an accident, then got scared and just parked it,” he says. “The Scooter Fix guy, he changed the gasket and changed the spark plugs and got it running.”

One Sunday afternoon when everyone was practically drugged by the March sun, I ran into Bogert and his girlfriend, Rachel Eilts, at an art exhibit. They were holding helmets and wearing gloves without fingertips. “We rode the Vespa,” Eilts told me. “It’s so nice to be outside in the city and smell all the smells.”

I asked them if they’d take me on a ride. Bogert responded with a promise — a threat? — to take me places I’d never been.

Not one to turn down a challenge, I showed up at the two-story brick building in Strawberry Hill where Bogert and Eilts live, a former printing press. Bogert was covered in dust. He, Eilts and some friends had just knocked out the second-floor walls. While Bogert cleaned up, Eilts showed me the fix-it jobs that had done for the building what the Scooter Fix guy had done for the bike: the former darkroom transformed into a kitchen, the lockers they’d bought on the cheap at a United Brassworks auction, shiny vinyl booths scored from a neighborhood bar that had tossed them onto the sidewalk.

No sooner was Bogert clean than he became dirty again, having discovered that the scooter wasn’t running properly. As he worked on the problem, his neighbor — a guy in jeans and suspenders who goes by Brillo (it was his beard) — came strolling by. The two lay down on their street, eyes focused on the wires and metal parts that made the scooter go. Brillo took pieces of extra wire and wound them together for Bogert to keep in the glove box. Cars have spare tires; scooters have spare wires.

Equipped with instructions to sit as far back as I was comfortable and to lean with Bogert when he leaned, we headed up Sixth Street, passing an amazing-looking firehouse with hoses cleverly cast into the doorframe, a detail I would never have glimpsed without my tour guide — or from a car.

We crossed the James Street Bridge and curled around the West Bottoms, where I smelled some smells, all right. I also saw the place that some of my favorite semis call home. Yes, I have favorite trucks. I like the ones that carry linens — Excel Linen (since 1931) and Faultless Linen (since 1896) both boast attractive logos. And then there are the Idealease trucks, with their happy, rainbow-over-semi insignia.

We took the winding Woodswether Road over railroad tracks, with the river on one side and buildings far overhead on the other. Bogert told me that there used to be a bridge connecting the Bottoms to the River Market. Awhile back, he and Eilts were riding around and saw workers disassembling the bridge one piece at a time. They caught it all on video.

The road dropped us off right below the Broadway Bridge. Coming from the other direction, my dad had often told me — a high school photography student — that if he were a photographer (hint, hint), he would go that-a-way and catch the interlocking bridges with an industrial view. Seventeen years old and set on finding my own ideas, I took pictures of swing sets instead. Had I not been such a little schmuck, I would have seen Woodswether Road long ago.

After circling the City Market and Columbus Park, we traveled across downtown on 11th Street. Heading west, the sunlight on my helmet’s scratched plastic visor made everything look like a film in which the light meter was slightly off — The Virgin Suicides, for example. It was dreamy and prismatic. I began to realize that on a scooter, even in your hometown, you feel like you’re on vacation. It’s partly the smell of the motor, which is like that of a jet ski. But it’s partly the whole wind-at-your-back, sun-on-your-face effect.

Taking Gillham up toward the Nelson then twisting through Westport, we came upon the Triangle of Death. You know what I’m talking about: Southwest Trafficway and Westport Road. But we made it out alive and did more KCK sightseeing.

First we swung by the Rosedale Arch. Looking out over downtown from that high elevation, Bogert pointed out a big, abandoned grain elevator behind Ponak’s. He had explored its internal graffiti and seen the sunset from in there. Figuring out how to get in had taken some doing, but that’s the work of the urban explorer.

Our next stop was on the bluff overlooking Southwest Boulevard. All of the houses — small and dilapidated yet painstakingly landscaped — had been built downward instead of upward, extending toward the boulevard below. On one lawn sat a beautiful greenhouse almost as big as the house itself. Here, I experienced one of those “Where the hell am I?” moments that you encounter every now and then in this town, no matter how well you think you know it — a feeling always followed the next day by an inability to find the place again.

We ended up at Sauer Castle, 935 Shawnee Drive. It’s a tall, majestic brick building with soaring windows and a tower, sectioned off by chains and padlocks and a “No Trespassing” admonition and signs indicating that someone is supposed to be restoring it to its former glory. But windows are still busted out.

According to the Kansas City, Kansas, Urban Planning and Land Use Web site, the 1872 Italianate villa, said by some to be haunted, was the home of German immigrant Anthony Sauer, who chose the location because the view of the Kaw reminded him of the Rhine. He grew grapes for wine there.

I’m not shitting you, people. There’s a castle in Kansas City, Kansas.