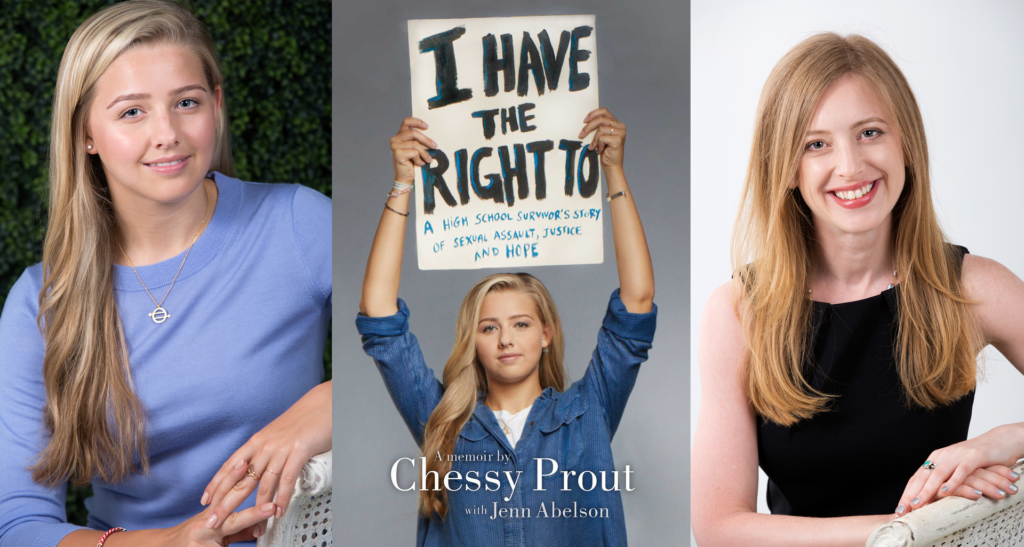 In 2014, at St. Paul’s School in New Hampshire, Chessy Prout, a high school freshman, was sexually assaulted by a senior named Owen Labrie. A year after a very public trial in August 2015, Prout came forward and identified herself as the previously anonymous survivor. She has since written a biography, with help from Boston Globe Spotlight Team reporter Jenn Abelson, titled I Have the Right to: A High School Survivor’s Story of Sexual Assault, Justice and Hope. Along with her book, Prout launched a social media campaign called #IHaveTheRightTo, which invites sexual assault victims to share messages protecting their rights “to be heard, be believed, and seek justice for wrongs against us and loved ones.”

Tomorrow, March 22, at 7 p.m., both Prout and Abelson will be at Unity Temple on the Plaza. We spoke with Prout about coming forward, her book, and the social-media movement she pioneered.

What made you decide to come forward?

Days after my trial, internet trolls blasted my name on online hate sites along with photos of my family, my home address, and rape threats. St. Paul’s then attempted to intimidate me by challenging my anonymity in the school’s response to my family’s lawsuit. I wasn’t going to let these bullies keep me quiet. I wanted to reclaim my name and my identity.

The response I received from sharing my story on The Today Show in August 2016 was overwhelming. Many survivors — young and old, men and women — came forward with their own experiences. If my story, as difficult as it is to share, helps just one person, it’ll have been worth it.

My little sister planted the seeds for “I Have The Right To” when we were watching a program about the civil rights movement during my junior year of high school. We started talking about the rights that girls needed today. Being able to claim my basic rights reminded me that the assault was not my fault. I had the right to say no, to have my body respected. I brought the campaign with me when I went on the Today Show because I didn’t want to show up empty-handed. I hope that my book helps others claim their rights too.

In today’s era of #MeToo and #TimesUp, how important is it to share stories of sexual assault?

I’m grateful to Tarana Burke, who started the Me Too movement more than a decade ago. I’m thankful that it is finally getting the attention it deserves. I hope that #IHavetheRightTo can be the next social movement to help people claim their rights and force institutions to stop protecting predators. Going public was the right decision for me, but I want to let other survivors know that you have the right to seek justice whenever you want, however you feel is right for you. The power and control is in your hands. You deserve to seek justice and heal in your own way, at your own pace.

You’ve shared that no “perfect” victim exists and that one of your messages is “#IHaveTheRightTo be vulnerable and strong at the same time,” as you recently tweeted. Do you think our society’s perception of victims is changing?

I think it is important to recognize that survivors are human too. There will always be those who try to tear us apart, discredit our stories, and bully us into silence. The public response to the #MeToo stories is encouraging because the tide is changing as the effects sexual assault has on victims is being better understood.

In the United States, females ages 16-19 are four times more likely to be victims of rape, attempted rape, or sexual assault. What do you hope “I Have the Right to” will teach high schoolers who read it?

So much attention in recent years has focused on sexual assault on college campuses, but these crimes are happening to high school students and younger. We must start the conversation sooner.

Part of what motivated me to write this book was that I didn’t know what happened to me was against the law. I couldn’t put a name to the fear and pain I felt. I thought I was being too sensitive and blamed myself for freezing during the assault. I hope that by illustrating this, high schoolers will gain a broader understanding of the importance of affirmative consent and realize that we have the ability to upend rape culture if we all work together.

There are still so many men in positions of power who have been accused of sexual assault, including the President of the United States. What do you think the next steps are to overcome our society’s rape culture?

Recently, I have been encouraged by the activism of young students. Too often it is the responsibility of the victim/survivor to be an advocate for change, which is why I am looking forward to seeing what Congress’s Bipartisan Taskforce to End Sexual Violence will do to support survivors.

I’m excited to start college in the fall and join Barnard’s Class of ‘22. And I’m looking forward to continuing my advocacy work and helping empower people of all ages.

Unity Temple on the Plaza