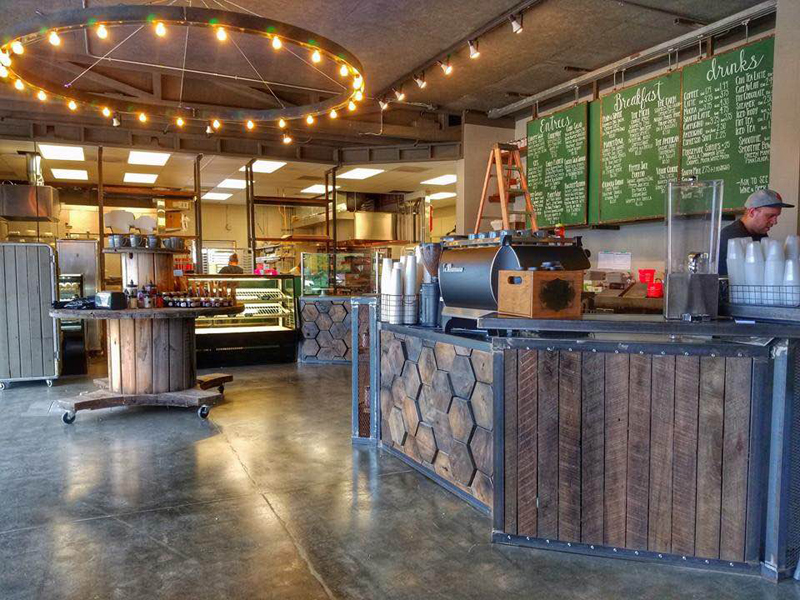 The small kitchen at Ragazza (301 Westport Road) now houses a big-name chef. Janet Ross, the longtime sous chef at Café Sebastienne and the recent second-place contestant on Food Network’s Cutthroat Kitchen, began her tenure at Ragazza last Tuesday. She has been a fan of the restaurant since its opening three years ago.

“I fell in love with it from the start,” Ross tells me. “It was too adorable. It reminded me of Macaluso’s on 39th Street.”

Ross and Ragazza owner Laura Norris have been acquainted for several years, but it wasn’t until this past summer that the two discussed working together.

“I had been working at Sebastienne for many years and was looking to make a change,” Ross says. “I happened to run into Laura this past summer and was feeling around and saying, ‘I should be your chef!’ She said, ‘That would be great.’ ” The two kept in touch,  and this fall turned out to be the right moment.

Norris says she’s excited to begin working with the high-caliber Ross, though she also wants to reassure her regulars that the classic Italian family recipes that make up the core of her menu aren’t going anywhere.

“She has such great energy and creativity,” Norris says of her new hire. “And we only have so many family recipes! So we will always have our staples. It’s a balance of keeping what has made us strong and well-received, and then adding a new layer of creativity. I think that Janet’s the person to do it.”

Ross says she’ll take her time to get acquainted with Ragazza’s menu, its smaller kitchen and the restaurant’s faithful clientele, then gradually incorporate her own specials into a daily rotation. Ross notes that she loves bold and unique flavor combinations, so she sees this opportunity as a great chance to express herself.

“I’m looking forward to a new challenge in my life,” Ross says.

Overland Park diners now have a new option for all-day dining: McLain’s Market (10695 Roe). The sister shop to McLain’s Bakery in Waldo, McLain’s Market is owned by siblings Jeff Hirleman and Mollie Lothman and serves breakfast sandwiches and wraps, as well as appetizers, wraps, salads and flatbreads for lunch and dinner. McLain’s Market also sells Post and Thou Mayest coffee, baked goods that use the original McLain’s recipes, and local jams, T-shirts and other goods. Wine and local beer are also available in the evenings. McLain’s Market is open from 7 a.m. to 8 p.m. Tuesday through Thursday, 7 a.m. to 9 p.m. Friday and Saturday, and 8 a.m. to 2 p.m. on Sunday.

The repairs at Blue Koi (1803 West 39th Street) have been ongoing since the restaurant experienced an electrical fire this past July. But there is hope for dumplings in the near future: Management confirms that the restaurant will be open before Thanksgiving. This means Awesome Sauce within two weeks.

There are few better ways to wind down from your week than with a little Irish whiskey. Browne’s Irish Marketplace (3300 Pennsylvania) is hosting a whiskey tasting and dinner at 6 p.m. Expect samples of Irish whiskey, as well as local drams from Restless Spirits distilling. Dinner and dessert are prepared by chef Beth Shrout. Tickets are available for $55 at irishcenterkc.org.

Celebrate the centennial of the National Parks system with a light (and free) brunch of bagels, coffee and juice, as well as artwork inspired by the Flint Hills of Kansas (not a National Park, but a lovely natural wonder nevertheless). The Buttonwood Art Space (3013 Main) is opening from 10 a.m. to 2 p.m., and is featuring work from 100 Flint Hills–inspired artists. Sale of the artwork benefits the Friends of the Konza Prairie, a nonprofit dedicated to preserving and promoting the Flint Hills.

Spend five hours of your Sunday immersed in Italian cuisine alongside chef Sandy DiGiovanni, featured on America’s Next Great Restaurant. The class is hosted by KC Culinary Center (7920 Santa Fe Drive, Overland Park), and features instruction on how to make a variety of Sicilian-inspired fare, including risotto con funghi, bragiole (a stuffed, rolled and seared braised-beef dish), authentic meatballs, and a pear-and-fig tart, among several other dishes. Register via the Culinary Center’s website; the $125 fee includes the instruction, lunch and dishes to take home.

Chef Howard Hanna wants you to get your hands dirty tonight at a beefsteak dinner hosted by the Rieger (1924 Main). Hanna and his team are preparing a feast in the tradition of 19th- and early 20th-century New York beefsteak banquets (which were often political fundraisers). Guests at the multi-course dinner are encouraged to set aside forks and go at the all-you-can-eat sliced beef with their hands. Smoked cheeses, shrimp cocktail, spring lamb chops and fries are also on the menu. Reservations (which include an apron and a Schlitz glass) are $75, exclusive of tax and gratuity; call 816-471-2177.

Louie’s Wine Dive (6701 West 119th Street, Overland Park) tonight puts on a champagne-themed wine-dabbler event, in which wine distributors compete for a spot on the restaurant’s wine board. For $30, you can sample eight tasting pours of champagne and sparkling wine, choose one option to have as your full-glass pour, and eat light appetizers. Reservations at 913-469-4177.

Bluestem (900 Westport Road) collaborates tonight with chef Howard Hanna and the staff at the Rieger for a four-course, cocktail-paired dinner. As one might expect, the menu is impressive: a fall vegetable terrine with bay scallops and king crab; pumpkin with smoked chili, sorghum and cured duck; boudin noir et blanc sausages with a chestnut purée and pickled butternut squash; and a chocolate sponge cake with hazelnut semifreddo and Caffé Amaro ice cream. The cocktail list is no less exciting. The dinner is $100 per head and does not include tax or gratuity. Call 816-561-1101 for reservations.