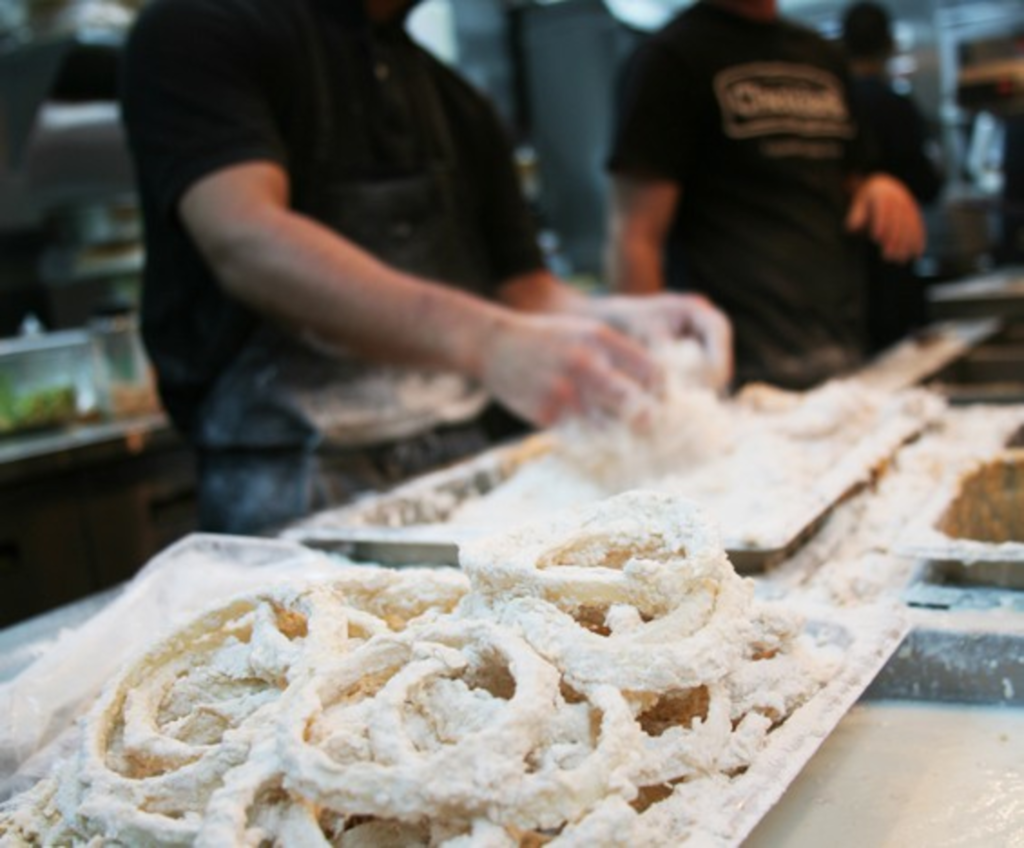 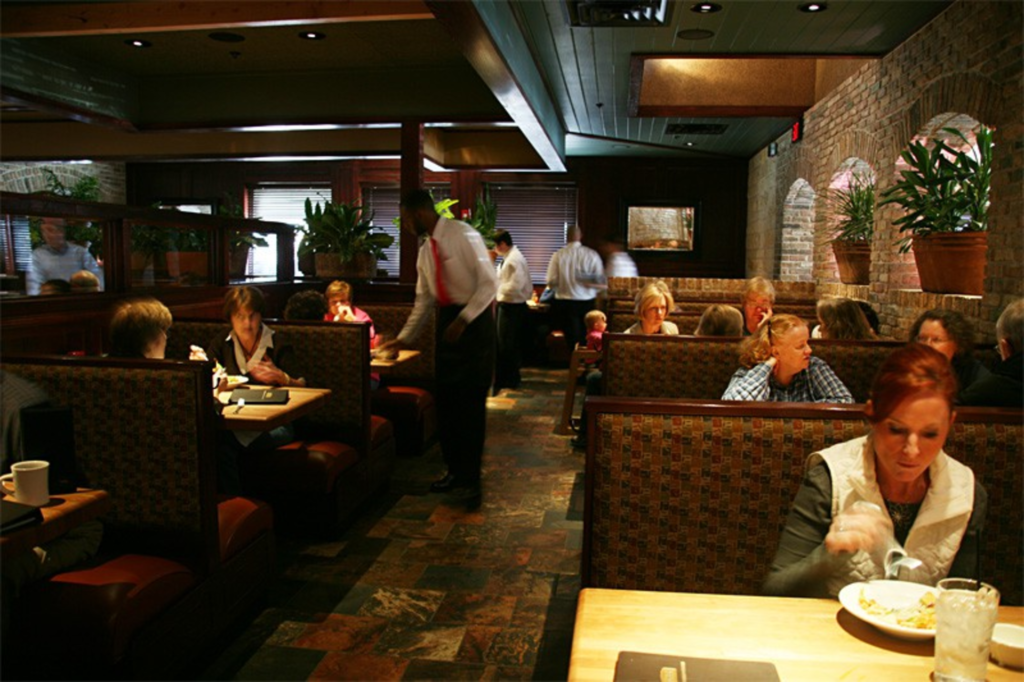 Last year, a friend of mine returned from a trip to Joplin singing the praises of a restaurant chain that I’d never heard of: Cheddar’s Casual Café. “The food was really good,” he said, “and so inexpensive. Most of the dinner entrées cost less than 10 bucks.”

My reaction was, “Gee, that’s nice. It sounds like a Denny’s or a Cracker Barrel.” I mean, this country is loaded with moderately priced casual-dining restaurants that do a fair job of feeding the masses the kinds of food that Americans like best: burgers, fries, chicken tenders and deep-fried cheese sticks. Do we really need another one?

The answer, apparently, is yes. The original Cheddar’s opened in 1978 near the Six Flags amusement park in Arlington, Texas, and immediately caught on as a family destination. The company opened a location in Overland Park this past December, and it’s already one of the metro’s busiest dining spots. It’s not unusual for the free-standing restaurant to be running 45-minute wait times during the week, and the claustrophobic foyer is typically packed with a horde of hungry men, women, kids and, on one occasion, a dog. (OK, it was a working dog, but you get the idea.)

“Is this place always so busy?” I asked one of the harried hostesses on my first visit. She handed me a pager and laughed. I think that meant yes.

Whatever Cheddar’s is doing, it’s doing it right. The handsome building certainly doesn’t evoke low-budget dining with its dark, clubby interior, polished-wood walls and heavy butcher-block tables. And the servers are remarkably well-trained, which is a bit of a phenomenon in this neighborhood around Oak Park Mall.

True, I groaned at the idea of waiting 45 minutes on a recent Sunday — at 4:30 p.m.! — to get the opportunity to order from a menu that serves no fewer than 19 chicken dishes and something called “baked Spasagna.” Baked what?

“Spasagna!” said my friend Bob, who had loved the dish when he’d eaten it in Joplin. “It’s made with layers of spaghetti with cheeses and a meat sauce. And it looks like lasagna.”

I found the concept somewhat offensive, but I held my tongue. “Keep an open mind,” whispered our friend Truman. “It might be very good. And everyone walking out of this joint looks happy.”

Many of them were also carrying Styrofoam boxes, which led me to believe — correctly, it turned out — that Cheddar’s Casual Café was probably more in the mold of a Cheesecake Factory: big portions and reasonable prices.

After we’d been people-watching for 30 minutes, our little pager began vibrating and flashing, and a cheery hostess escorted us to a table and introduced us to our server, a broad-shouldered kid who looked less like a professional waiter than the fullback for a high school football team. “Oh, no,” he laughed. “I’ve been out of high school a long time. Two years!”

I took note of the casual details: no heavy paper napkins (like squares of Bounty on steroids) and no tablecloths. Almost all of the starters are fried. “We’re most famous for our homemade queso dip,” the server explained. It’s cheap at $3.99, and the menu notes, in red ink, that “for a heartier flavor, add seasoned ground beef at no charge.”

I guess that’s true, but I kept thinking, “Has the downturn in the economy made people go completely mad?” To get so excited about a spoonful of ground beef in cheese sauce? I looked over at a woman in the next booth, and she was gazing at a basket of fried chicken tenders — “cooked to golden perfection,” according to the menu — as if she hadn’t seen food for a month.

Truman wanted a martini but changed his mind at the last minute. “I’m only going to eat some loaded potato skins for dinner, and I don’t want to get drunk and say something to the waiter that might embarrass you.”

In a moment of sheer daring, I decided to order the baked Spasagna. It tasted very much like one of those casserole innovations that my mother learned about while watching a cooking segment on the Today show. I confess that it was very tasty. I ate every single bite, and I’ll never order it again. Bob’s big chicken pot pie was covered with a flaky pastry top and filled with hefty chunks of chicken breast. “Not like that ol’ Swanson’s frozen brand, huh?” Truman smirked. Bob ignored him.

Nothing on the dessert menu looked that appealing to us; there were only three options (amazingly, none of them was crème brûlée). This is an all-American restaurant, so the choices are apple pie, chocolate cake and a “legendary monster cookie.” Here’s where Cheddar’s could take another lesson from the Cheesecake Factory: Offer cheesecake.

When I returned several nights later with Franklin, Linda and Richard, that cookie caught Linda’s eye immediately. “I want one of those,” she said, pointing to the menu.

We had waited only 20 minutes that night (and used the time to walk across the Oak Park Mall parking lot to look through the sale books at Barnes & Noble). Linda was entranced by the clientele at Cheddar’s — “They’re almost all overweight!” — and the mostly fattening stuff on the menu: “It’s the classic Midwestern fare of dinners that everyone wants to eat instead of what they should be eating.”

That says it all. Yes, Cheddar’s has a vegetable plate, but it’s made up of a salad and four side dishes, including a choice of steamed broccoli, loaded baked potato, broccoli cheese casserole and French fries. Honey, that’s my kind of veggie plate!

Richard and Franklin went the deep-fried route: fried shrimp for the former, fried chicken tenders and a nice grilled sirloin for the latter. Because I was feeling like one of those overweight patrons, I discreetly ordered the Asian chicken and shrimp salad, which wasn’t all that original but had enough crunchy noodles and Mandarin orange wedges for maybe nine salads. Linda was the one who really scored that night, though: The Cheddar’s Monte Cristo sandwich is hands down the best in town. “It’s not like a sandwich,” she marveled, “it’s like ham, cheese and turkey baked in a doughnut!”

It’s true. The “bread” portion of this fried sandwich was as light, flaky and crisp as a freshly fried Krispy Kreme. I grabbed half of the sandwich for myself and said to hell with that salad.

Unfortunately for me, after eating half of the Monte Cristo, half of my salad, a few of Richard’s shrimp, and all of Franklin’s broccoli cheese casserole, I couldn’t bear the idea of dessert. But my three companions eagerly dug their spoons (teaspoons, for some bizarre reason) into a shiny metal skillet boasting a big, fat, warm, gooey chocolate-chip cookie topped with ice cream and hot fudge.

“It’s fantastic!” Linda said. “No wonder everyone who eats here gets fat. The food here is addictive.”

Our group walked out with four take-home boxes. It was 9 p.m., and there still were people in front of the restaurant holding pagers.

“This concept is the wave of the future,” Linda said. “Big food, small prices.”

And if you don’t mind the wait — or the weight — it’s someone’s idea of true happiness.