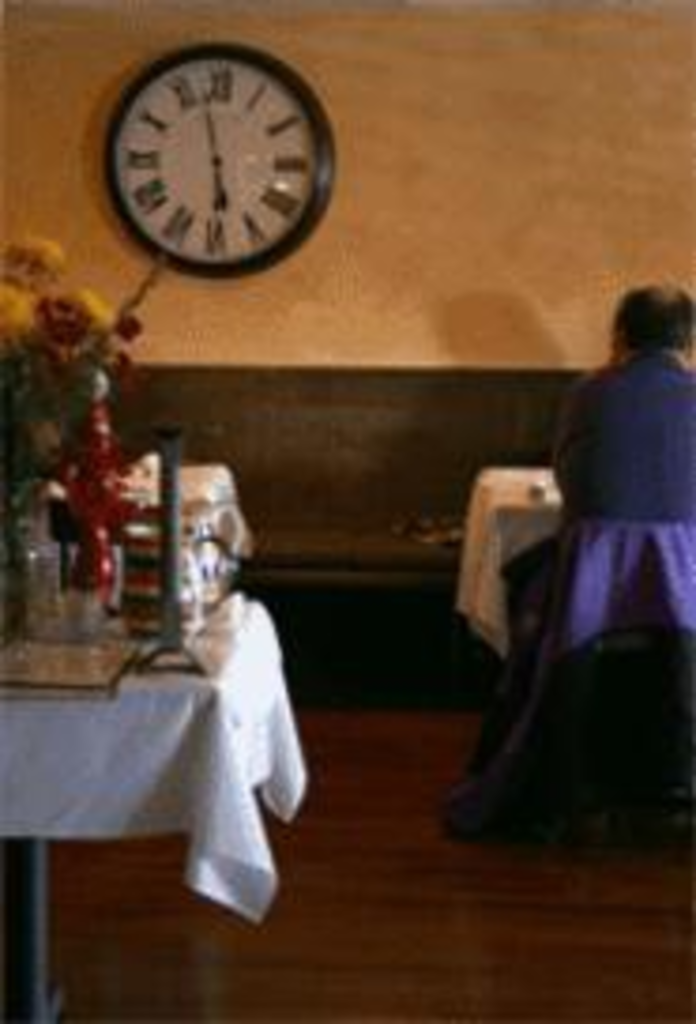 There’s an old Gaelic proverb, Cha d’dhùin doras nach d’fhosgail doras, which roughly translates as “No door ever closed, but another one opened.” It’s a nice way of explaining how the beloved midtown saloon and restaurant the Romanelli Grill quietly ended its 70-year run in July and opened its doors in October as an Irish pub called The Gaf Pub & Grille. The transition was so smooth that I’m still running into midtowners who haven’t heard that the Romanelli Grill vanished.

Not everyone is happy with the transformation. I know a couple of Romanelli regulars who still long for the comfortably shabby familiarity of the old place. Over seven decades, the venue changed very little from the unassuming neighborhood joint that opened during the Depression. The menu stayed homey and uncomplicated — headlined by steaks, spaghetti, rainbow trout and apple crisp — and the prices were shockingly cheap.

I liked the joint for that very reason. It was so brazenly unhip that it was kind of retro cool. Not unlike the equally genteel Leona Yarbrough’s Family Restaurant in Shawnee or the 60-year-old Stephenson’s Old Apple Farm Restaurant on the east side, which still serves apple daiquiris and baked chicken. Similarly, the Romanelli Grill survived not only the changing demographics of its neighborhood but decades of evolving culinary trends and fashions. When a venue sticks around long enough, it often comes back into style.

But the hipsters never discovered the Romanelli Grill. You rarely saw diners under the age of 30 in the place, unless they were escorting a grandmother or an elderly aunt. When I reviewed the Romanelli Grill three years ago (“John Knox Vittles,” October 31, 2002) I spotted a thirtyish friend eating a cheeseburger in the dining room. She made me promise not to “out” her as a Romanelli regular. “Darling,” she said. “I’d rather be seen walking out of Ray’s Playpen.” OK, so the place lacked glamour. The décor was dowdy, the food bland, and most of the clientele had voted for Harry Truman, but my review gave it points just for carrying on. That didn’t mean I could ever get anyone I knew to eat there.

The owner of the Romanelli Grill, Joe McCabe Jr., must have figured his aging clientele wouldn’t live forever. So he sold the majority interest in the place to partners James O’Brien and Ray Dunlea. They gave the frumpy old place a dramatic makeover, which started with the name. In Dublin, gaf is usually defined as slang for one’s home or flat. O’Brien has been quoted as saying that gaf is Irish slang for chat or a meeting place.

It could mean just about anything in its current incarnation; I noted during three evening visits that The Gaf attracts a mixed lot of chatty diners, including Gen-X types, baby boomers and loyal Romanelli patrons in their sixties.

Though the bar still sits to the left of the entrance, The Gaf bears little resemblance to the smoky Romanelli saloon. It now looks like a modern Irish pub, with shiny hardwood floors and dark woodwork. And, of course, there’s Guinness on tap. The dining room is brighter and more attractive than before, thanks to the new upholstered booths and tables draped in white linens. There’s even a rustic stone fireplace on the eastern wall, although the only thing I’ve seen burning in it were votive candles.

The place does a steady business, and sometimes there’s a wait for a table. But on the Friday night I arrived with Patrick, Bob and Yvette, we had the luck of the Irish with us: We snagged a parking space near the front door and didn’t have to wait for a table. Walking through the dining room, Patrick even noticed several people who seemed to have dressed specifically for an Irish pub. “I saw a woman wearing brogues, a man in a cable-knit sweater and at least one tam-o’-shanter,” he said before we ordered.

The menu, created by the rugby-player-sized chef Jason Hill, may be the most significant change. Out are Romanelli standbys such as sliced pumpernickel bread, skimpy iceberg-lettuce salads and fried chicken livers served with melted butter. The previous restaurant’s signature fried catfish, however, got a reprieve. I was stunned to see how many of the older clientele ordered it, obviously throwing fears of heart-clogging cholesterol to the wind. Emboldened by their courage, I wound up getting it, too.

Hill’s menu seems more bistro in style than traditional pub fare. The appetizer list boasts the usual suspects, including calamari, buffalo wings and onion rings. There’s also something called Irish Farmhouse fondue and a tempting flash-fried Brie, which I did long to sample (but it wasn’t available fried on the night I wanted it, for some reason).

The nine entrée choices are more sophisticated than you might expect. Bob raved that the filet was beyond perfect: tender, juicy and covered with a decadent blue-cheese sauce. “And served with the most delicious potato au gratin,” he said. Patrick was equally enthusiastic about that night’s dinner special, a pan-roasted, center-cut pork chop with apple-and-fig stuffing. “It’s very figgy and sweet,” he said, “but really flavorful. And the broccoli that came with it is organic.” Organic! There’s a word that probably wasn’t used much in the old Romanelli kitchen. But catfish was. I vaguely remember that the Romanelli servers offered to de-bone the fish for you, but our server just plopped my plate in front of me and vanished. She wasn’t terribly attentive to any of us, but she had a vivacious personality, so we cut her some slack. My catfish dinner was neither the biggest nor the flakiest I’ve had in town (the Stroud’s version is the best), but it’s as good as the fish served at Romanelli and just as crunchy and greasy. Meanwhile, Yvette was somewhat disappointed by the beefy and stingy-portioned shepherd’s pie she ordered, but she ate every bite.

The Gaf serves up solid, hearty comfort food, we agreed, but there are uncomfortable little kinks that the place still needs to work out, such as a caramelized sugar crust on a crème brûlée that wasn’t just burnt but blackened. And speaking of kinks, why is there a giant clock on the northern wall that doesn’t work?

Oh, well, the fireplace doesn’t either. And I’m still reserving judgment on the service after enduring an incredibly snippy waiter the night I dined with my friend Julie. The food was really excellent that night; Julie loved the pan-roasted salmon perched on a bed of hot mashed potatoes and dripping with a fragrant garlic-rosemary butter sauce. I thought my meal — a bowl of tortellini in a creamy Parmigiano-Reggiano sauce with bits of bacon and peas — was luscious. The only disappointment was that the server made a couple of annoying mistakes, including charging me for the un-fried brie that we didn’t order. What the hell — a gaffe is a gaffe, and The Gaf is still getting its act together.

The positive news is that this new neighborhood pub has plenty of potential. The food is tasty and generally very comforting, the interior looks great and the prices won’t have you going out mooching for an extra bob or two. That’s Irish slang for hustling a little extra dough. But in any language, The Gaf is a place worth chatting about.