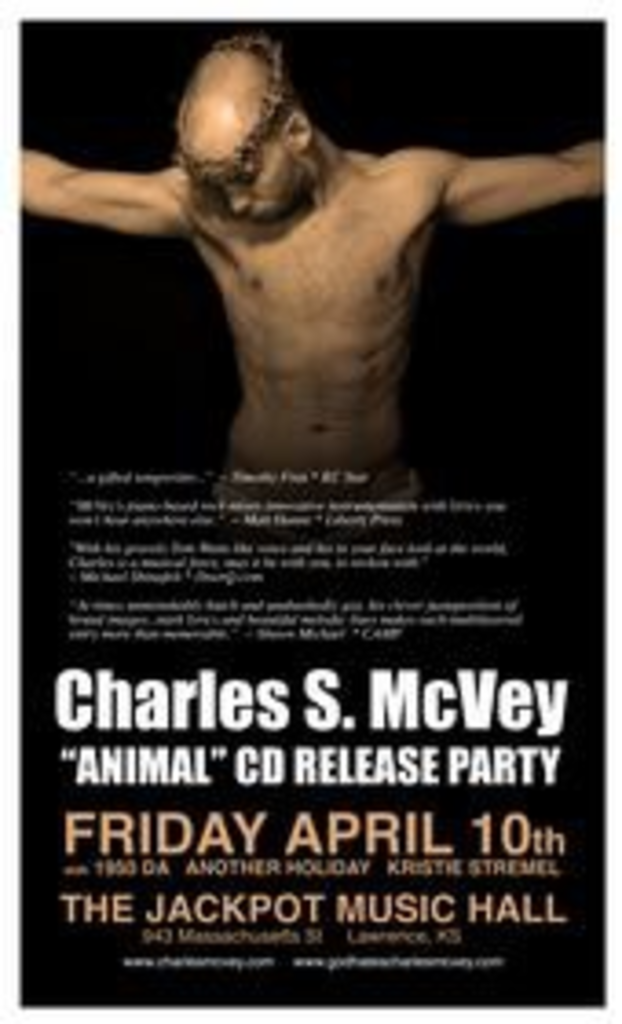 Tonight, there will be a piano-rock meltdown on Mass Street as gay singer-songwriter Charles S. McVey celebrates the release of his first full-length CD, Animal.

Opening up at the 18-and-over show are Kristie Stremel, Another Holiday and 1950 DA.

Last November, I reviewed McVey’s EP, Modern Living. Since then, a new copy of Animal found its way to me, complete with cheesecloth-and-twine wrappings and a bonus photo of adult film star, Scott Campbell (link NSFW) with his dick out. The album’s artwork features McVey dressed as a priest and Campbell dressed as Jesus engaged in various Catholic-themed, homoerotic poses. Happy Easter!

Cuts from Animal share the same over-the-top earnestness and layered instrumentation as Modern Living. Can McVey’s brand of melancholy piano rock, augmented with flute, saxophone and lyrics that, according to his MySpace, “meander through such concepts as sexual repression, doubt, and divine abandonment” translate to the stage tonight?

(If gets to be too much, slip out the door and head across the street to the Replay Lounge and check out the Roman Numerals and the Old Black)