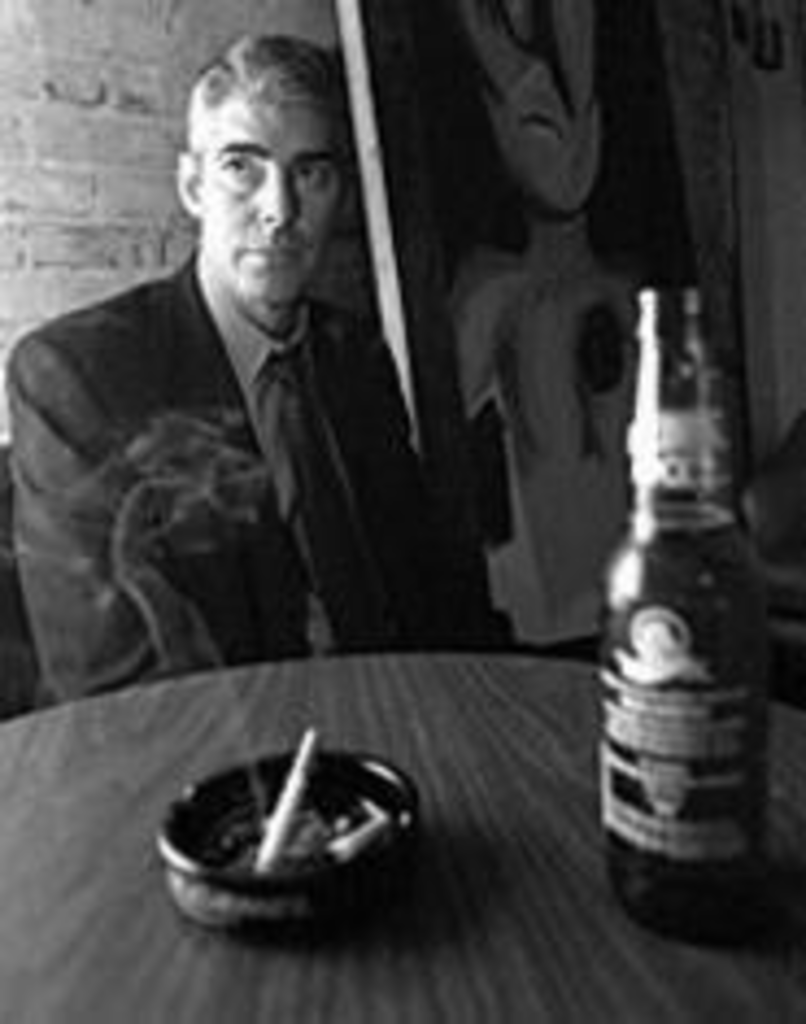 Social Distortion, one of the most prolific and influential groups in American underground-rock history, established the pop-punk template that more polished outfits such as Green Day and Offspring would eventually convert into multiplatinum success. It later settled into a grizzled country-punk hybrid, best exemplified by its 1990 hit cover of Johnny Cash’s “Ring of Fire.” The group celebrates its 25th birthday this year, with a new studio album and a tour on the way.

But even its most hardcore fans seldom remember that before Mike Ness, another frontman briefly handled singing duties for the band.

Corvin is one of the station’s “live on the scene” correspondents, covering breaking news several nights a week. At 6-foot-7, the well-groomed guy in the impeccable suit who introduces his sound bites in a commanding tone brings to mind imposing ex-jock sportscasters, not death rockers.

Corvin has mentioned his punk past to a few broadcast buddies over the years, but he’s done so less and less as the group has become more popular. “Primarily because I don’t think people believed me,” he tells the Pitch.

Some of his Channel 9 coworkers found out about a month ago — Corvin says he’s not sure how — and a brief buzz resulted.

“For a couple of days, people were like, ‘Dang, you were in a punk band,'” Corvin says. “Some of them actually know who Social Distortion is. It does give me a false sense of temporary pride, but I quickly remember that I had very little if anything to do with Mike’s success.”

Corvin’s brief association with the band began with a strange audition in a baby-blue Ford Pinto station wagon parked in front of a Fullerton, California, record store.

In the driver’s seat was Casey Royer, who popped a Cheap Trick cassette into the Pinto’s player and asked Corvin to sing along. He tackled “Surrender,” hitting the high notes with a versatile voice he’d developed in church choir. Royer said nothing after the song ended. He just started the car and drove to his parents’ house. An hour later, the band’s other members — a bassist known only as Mark and a sixteen-year-old guitarist named Mike Ness — gathered in Royer’s bedroom. He had the job.

Luckily, he had plenty of time on his hands. A bench-riding scrub on the Cal State Fullerton basketball team that made a surprise run in the 1978 NCAA tournament, Corvin was cut to make room for the incoming hot-shot recruits who suddenly became interested in the squad. He had agreed to try out for the band after Royer, a cafeteria worker at the athlete-heavy apartment complex where Corvin lived, asked him.

This embryonic incarnation of Social Distortion played covers, mimicking Van Halen, David Bowie and the Cars. But after a few months, Social Distortion composed its first original songs, with Ness crafting the guitar riffs and Royer penning most of the lyrics. Social Distortion practiced in an industrial-park storage facility with a pull-down metal door. It shared the space with a group called the Strand, which was already playing club concerts and recording its material. In an effort to impress both the Strand and his Social Distortion bandmates, Corvin took his first stab at solo songwriting, bringing a tune called “Sid Is Dead” to practice soon after the death of the Sex Pistols’ Sid Vicious. Corvin says he can’t remember any of the lyrics, but he recalls the song’s reception.

“Frederick, the singer of the Strand, took the paper from me and read it out loud,” Corvin says. “I remember the polite silence afterward and how someone set a beer can on my crumpled lyric sheet before our practice ended.”

Though he had become a popular sports columnist for Fullerton’s student paper on his way to obtaining an undergraduate degree in journalism, the ex-athlete’s writing didn’t impress his punk peers. From then on, he was content to contribute a few scattered lines to Royer’s creations. Many of the tunes from that lineup didn’t last beyond the band’s early gigs; the crowds for those house parties sometimes numbered in the single digits and topped out at an all-time high of 300. However, Corvin’s Social Distortion did produce one instantly catchy number, on which he helped write the lyrics.

This amoeba’s got a mind of its own/But don’t turn your back, you stupid science world, Corvin howled on “Amoeba,” which became a regional radio hit for the Adolescents, Royer’s next band. After Corvin left the group in the fall of 1979, Social Distortion kept the musical foundation but changed the lyrics. Released as “1945,” the Ness-revised version replaced Ahhh-meee-bahhh with Atom bomb/T.N.T./New disease/Poor city.

In the October 1980 issue of Flipside, Ness explained the switch. “Our singer [Tommy Corbin, as the ‘zine incorrectly identifies him] and drummer would write the songs, but the songs didn’t mean anything. They wrote a song about an amoeba, a little fuckin’ stupid little cell.”

Although Ness later disparaged Corvin’s contributions, the two seldom sparred as bandmates, mostly because Ness had not yet become the type of punk purist who would bristle at Corvin’s swim-trunks-and-flip-flops wardrobe.

“With the exception of the occasional dog collar, the punk look wasn’t uniformed yet in Southern California, not even for Mike,” Corvin says. “He wore a leather jacket and dyed streaks in his hair once, but there wasn’t really a look yet, so there was no shit-giving. We just wore what we felt like wearing.”

After leaving the band, Corvin’s carefree clothing choices ended abruptly when he decided to go to graduate school — at Bob Jones University. The hard-line fundamentalist Baptist institution in Greenville, South Carolina, required him to wear slacks and a tie every day, providing a jarring contrast to Fullerton’s chaotic concerts and binge drinking with bandmates.

“I was looking for discipline, and I thought it would be like a military school without the military aspect,” Corvin says. “But it was a lot more strict than I imagined.”

During his first semester, Corvin found himself on “spiritual probation” after his roommate reported him for having a bad attitude. He saw his off-campus privileges revoked, and with them went his only chance to listen to rock — on his car’s cassette player driving to his part-time job at The Greenville News.

“All music had to be approved,” he says. “If it had a beat to it and it wasn’t overtly spiritual, you’d better ask.”

Corvin considered returning to California to rejoin Social Distortion, but he decided against it. “How do you tell your dad you chose a punk band over grad school?” he asks.

Besides, while Corvin tiptoed through the rest of his two years at Bob Jones, the California punk community changed substantially. Even as the movement thrived creatively, it struggled to absorb abrasive elements such as Suicidal Tendencies’ thug following and a growing skinhead presence. Gigs often ended early because of bloody fights, not the mere noise violations that cut concerts short in Corvin’s day.

“It had become so violent, and I really wasn’t into that,” Corvin says.

Corvin returned to California during one break at Bob Jones and looked forward to a reunion with the group, but Social Distortion was temporarily on hiatus at the time. Royer had left to form the Adolescents, taking “Amoeba” with him. Ness and his friend Dennis Danell formed the short-lived outfit Orange County Dustbins. (Corvin says Royer mocked the Dustbins.)

By 1982, Social Distortion had re-formed, with Ness firmly in control of a lineup that included Danell, bassist Brent Liles and drummer Derek O’Brien. The group released its first album, Mommy’s Little Monster, and set off on its first coast-to-coast tour with Youth Brigade and Minor Threat, the dark details (bus breakdowns, shady promoters) of which appear in the documentary Another State of Mind.

Ness described that tour as “upsetting but adventuresome” in a letter he sent Corvin in November 1983. The address floats inside a speech bubble from the mouth of a doodled punk with x’s for eyes.

“I hope you liked the album,” Ness writes in neat cursive. “Quite a surprise, I’m sure.” He signs the letter “socially distorted yours, Michael Mess,” crossing out “Mess” and replacing it with his proper surname.

Ness’ attempts to stay in touch with Corvin made him think there was still a chance he could be welcomed back into the band, but his own developing news career made that move unlikely. After an inauspicious start as an anchor at a UHF outlet in Ohio, where he saw the station replace its sportscaster with a Pentecostal preacher who belted out the scores, he moved on to a successful stint in Colorado Springs.

In 1985, Ness went to prison for drug possession. “When he came back, he sounded like Johnny Cash,” Corvin says, noting the group’s increasingly country-tinged compositions and the more introspective nature of the singer’s lyrics. “It was like two different bands.”

In 1988, Corvin went to see Social Distortion play in Tampa, Florida. When he went backstage after the show, the first question Ness asked him was, “So, you still going to college?” Corvin, having been out of school for seven years, says he just laughed and said, “No, that was a long time ago.”

“It was like seeing a relative for the first time in a long time,” Corvin says now. “He wasn’t that sixteen-year-old anymore. He was a man, and I was impressed. I told him I was proud of him. We made small talk, but the time lapse was pretty obvious. Our lives were so far apart.”

As Social Distortion continued to climb, signing with a major label and making MTV’s heavy rotation with elaborate videos, such as “When the Angels Sing,” Corvin felt twinges of regret. Yet for a bracing reality check, he considered Royer, well into his late thirties at the time and still touring in a cramped van.

“At what point do you stop? I went ahead and answered that right off the bat,” Corvin says.

Corvin moved to Kansas City to raise a family, and he and his wife, Lorrie, now have two sons, including one he helped deliver in the family’s midtown house less than two weeks ago. It’s a comfortable life. But when he sees local punks with Social Distortion patches on their leather jackets — he has spotted several since moving to town last year — he considers approaching them and telling them about the old days. He imagines the dim recognition (“Hey, aren’t you that dude from Channel 9?”) giving way to awe.

“If those kids only knew,” he says, flashing a toothy, broadcast-ready grin.