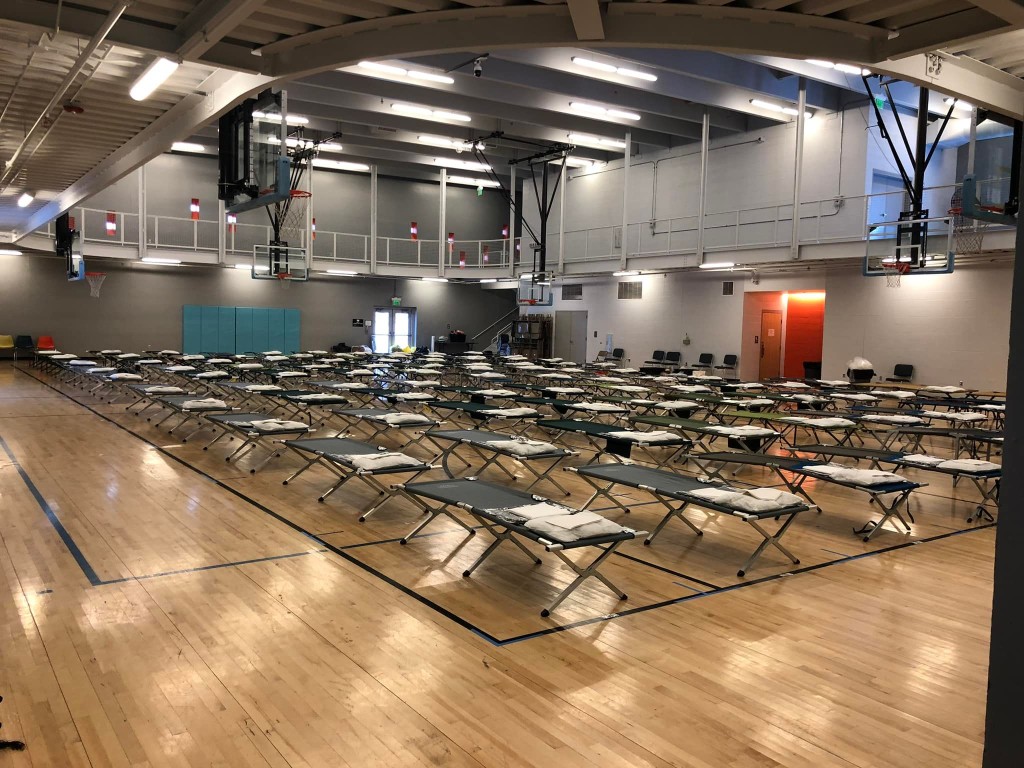 “Will you be open tonight?” asks a woman desperate to establish any kind of routine in a houseless situation, which is utter chaos on the best of days, especially when it’s below freezing.

“No, sorry,” a volunteer says. “The forecast says it will be in the mid-20s until later in the weekend. It looks like we’ll be open Sunday and Monday.”

In 2021, the first warming facility was established at Garrison Community Center following the hypothermia-related death of a houseless man named Scott Eicke. That facility was operated by the KCMO Parks and Rec department but managed by a private group. By February, it changed leadership and migrated to Bartle Hall, where on many nights, more than 500 beds were full.

In the winter of 2021-2022, Reverend Randy Fikki hosted the warming center at his Southeast Unity Church near Swope Park. The capacity was approximately 50 people, and Reverend Fikki got the city’s approval to move it back to the Garrison Center by the end of January. Garrison’s capacity allowed ample room for 75-100 nightly lodgers. Still, there were nights when folks were turned away.

“Lives and limbs are at stake,” says Reverend Fikki. “So I’m happy to announce we have the approval to keep the shelter open from Dec. 1 through Feb. 28.” This year, unlike prior years, the shelter will be available every night.

“Between Unity Southeast and Hope Faith, residents will get breakfast, lunch, dinner, laundry, and showers,” Reverend Fikki says. “We will also be able to connect them to counseling and vital service providers.”

When asked about the challenges of operating the center, Reverend Fikki says, “In the past years, the planning and opening of the emergency shelters always seemed rushed and not cohesive. In the past, there was no one person who made the final and/or hard decisions about day-to-day operations.”

One volunteer, a nurse, named Dawn Valentine, relayed a story of a houseless woman sprayed in the eyes with mace. “Trouble is that it was 45 minutes before the team running the center at Bartle Hall was set to open,” she says. Valentine tried to find anyone for approval and couldn’t. So she went rogue, letting the woman into Bartle early and rushing her to the bathroom while asking a man with her to try to find saline wash.

“The poor woman was screaming and crying. Clearly suffering, and eventually, the guy who was with me did find a saline bottle in a partially exhausted first aid kit, and we got her to a manageable state,” Valentine says.

While further elaborating on challenges, Reverend Fikki mentioned people who are sent to the center from the hospital but with no clear plan. Sometimes the volunteer staff is graced by nurses and first responders. Sometimes, it isn’t.

It wasn’t frequent, but there were occasions on which certain personalities within the nightly groups couldn’t get along with certain others. Sometimes they have a history. Tiffany Buckley echoed that concern. Tiffany is head of Volunteer KC, Inc. and happened to be there on one of those nights last February when a combative lodger had to be physically removed. “After a physical altercation between one of the two security guards and a guest, we made the tough decision to withdraw our volunteers and focus efforts elsewhere,” Buckley says.

She hoped protocols had been established which would address her concern. Specifically, she was concerned about the legal ramifications for her organization resulting from last year’s center not having access to a secured room where residents’ checked luggage could be stored. Nightly visitors are scanned and patted down for weapons on their persons and are allowed one small bag they can carry with them for the evening. But what is in their checked bags is a mystery.

“All bags will be stored behind a locked door,” security says when referencing that concern.

To be sure, there is nothing easy nor glamorous about such an operation and the copious concerns that come with it. This year, the center will be open every night, and that will take a lot of volunteers. The staff was thin last year when they were only open three nights a week on average.

When asked why he invests this kind of time in operating the center, Reverend Fikki says, “If not me, who?”

For more information on volunteering, visit the shelter’s website.