Chance Dibben on his musical project, Selvedge, and finding peace through noise 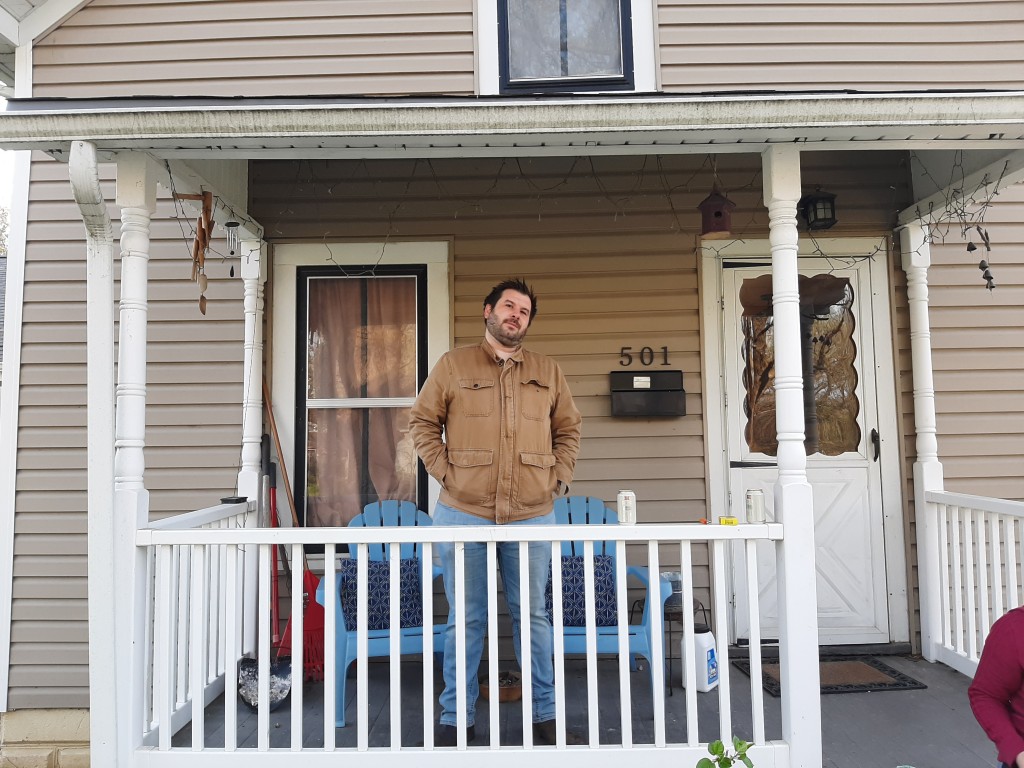 While I do my fair share of phone interviews, there’s really nothing quite like face-to-face interaction, so it was with some joy that I figured out a way to interview Lawrence poet, comic, and musician Chance Dibben about Hunger Stones, the latest release from his noise project, Selvedge. He lives a few blocks from me, so last week, I wandered over with a go-cup full of Franzia to stand on the sidewalk while Dibben hung on his porch, and we had this chat while starlings screamed overhead and trains went by the next block over.

The Pitch: I figured it was really appropriate to talk about this tape right now because it’s a bedroom project, and seemingly everyone is working out of theirs right at the moment.

Chance Dibben: Absolutely. I mean, it’s literally made in our second bedroom.

Even though you’ve had it ready to go since before this, there’s also the name of the project, which is also very perfect, in that it’s the edge that keeps things from unraveling. When did you start doing bedroom noise music?

This all actually started when Peter Lyrene – my old comedy partner – and I had a very short-lived music comedy podcast called Hot Riffs. I was the de facto producer and that was my first experience to a DAW [digital audio workstation]. We played a lot of songs on there, and I had all these songs stitched up and then I would start to chop them up, screw them up, you know: take drum parts and start to do that. That was like 2013 and then, I didn’t really mess with that for a while. Jump ahead to 2017, 2018: I finally have a good computer that can do a little bit more and has a little bit more processing power, and I’m just like, “I’m gonna do this. I’m gonna get more into this,” and at the same time I downloaded a bunch of apps.

I would have the ability to make some noise or some sample on my lunch break, bounce it up, come home, and see if I can make something out of it. If I couldn’t, ain’t no problem; if I could, great. That just sort of what snowballed from there. I just kept doing that. There is a period in the fall of 2018 where I just did that every single day and that’s how I ended up with so many things that I’ve gotten released or pending release or I’m just sitting on right now.

Have you always been a fan of noise stuff?

What appeals to me about noise, in whatever way you want to think about noise, is there are dynamics that happen with that and obliteration of the ears in stuff like power electronics. I’ve also been really attracted to other types of noise. For instance, Yellow Swans and the type of noise that they do, which is very epic, sweeping – very akin to drone and ambient, but blown up to these large canvases. For me, noise is about that simple trick of, “Here’s this really nasty sounding thing being wrenched into something that either has structure or has pockets of beauty in it.”

My favorite records will do that. Like, okay – I’ll be the guy who says Loveless – which does that. Psychocandy does that. Brainiac does that. All these really, really interesting acts use noise as a tool.

So this project was the most aggressively objectively noisy thing that I’ve done. I’ve got stuff that’s a little bit softer or stuff that has more actual concrete beats to it or more patterns to it, but this all arrived organically. I just finished another project and I wanted to go, “Okay, let’s link out some lines and let’s scramble them up, and let’s see how it sounds when I process it as this and I do it like this and I shape it like this.”

Selvedge is not strictly a noise project, though I definitely gravitate toward noise and feedback a lot. When I was putting together Hunger Stones, I was listening to a lot of CONTAINER. But I dig so much music. I’m sure you relate. The next tape with Mystic Timbre (in the works for summer, I think) is an expanded version of this ambient EP I did as a reaction to a hard winter that turned into everything.

I released it as a way to provide some peace, I guess, and to counteract or complement the big noise thing that was coming out. I kind of jump around, genre-wise, and chase whatever makes sense in the moment. I adhere to the write fast, edit slow motto, and so I end up with a lot of projects at any given stage. I’m a “naive intuitionist” – aka, a dedicated amateur; aka, a hack with gusto).

Is part of the appeal of working with your label, Mystic Timbre, the fact that they are nonprofit and the releases benefit different organizations, the way this tape benefits RAICES and Lifeworks Austin?

I had connected with Anthony Pandolfino of Mystic Timbre because I just liked his music. He said, “Hey, I’ll send you my stuff and if you like this tape, I’ll send you an actual tape.” It’s funny because I was like, “I don’t even know if I have a tape player. Save it for somebody that actually has a tape player.” Later, he’s like, “Well, if you ever have something that you want to submit through this, let’s go and so I submitted him a draft of that EP [Mutiny].

I said, “Hey, I got this weird thing. Do you wanna do anything with it?” He goes, “Yeah,” so that’s how that came out, and that’s a very long-winded way of saying, yeah, that’s totally the appeal. I would certainly love to have a release on a bigger platform, but for the kind of stuff that I’m making, I don’t know if that’ll ever happen – and that’s fine. It’s like the difference between theoretically making 30 to 100 bucks off a release, if that, versus being part of a system that if there are any profits to come out of this, it goes to organizations worth supporting. That’s definitely a really strong appeal – working with somebody that has an affinity for this kind of stuff.

The thing that I found really interesting, listening to the music is that it is noise, but as the album progresses, there are hints of more traditional song structure, but they’re buried really deeply. A couple of those last tracks have a rhythmic loop to them, as well. Was that the idea when you were sequencing everything – to have it work toward that?

Actually, when I presented it to Anthony, he wanted the sides reversed and for me, that just didn’t feel right. There’s definitely a building – definitely coming through a cloud, coming through whatever metal chains or screen that we’re coming through, into more recognizable forms. The last track was purposely a little bit mellower, just because I didn’t want to the last track to be more of that, but a nod to the light outside of the shadows, so to speak.

Then, the artwork is these vintage photographs of an underground cave.

So, I might be butchering the concept, but it appealed to me when I first learned about it. It’s these stones in Eastern Europe where in the 1600s, medieval Europeans would write warnings on these big boulders in rivers. It would be a warning to the people around them that, if you see this stone, bad stuff is happening – because there’s a drought or environmental change happening. In a lot of the early Selvedge stuff, this grasp of environmental catastrophe kind of filters in a suit a lot, so the idea of Hunger Stones is really supposed to be a message to the future: “This is what we’ve gone through. This is what you’re going to go through.” That’s also one of the reasons why I wanted to end it on a little bit more of a milder note because I wanted there to be hope.

This piece was edited for clarity and to deal with the sounds of the aforementioned birds, trains, cars, and random neighborhood dogs and children.

Editor’s Note: We love Chance. This has not edited our editorial stance in any way. We just happen to think he is pretty and smart. He also sells books of poetry, and they all good.