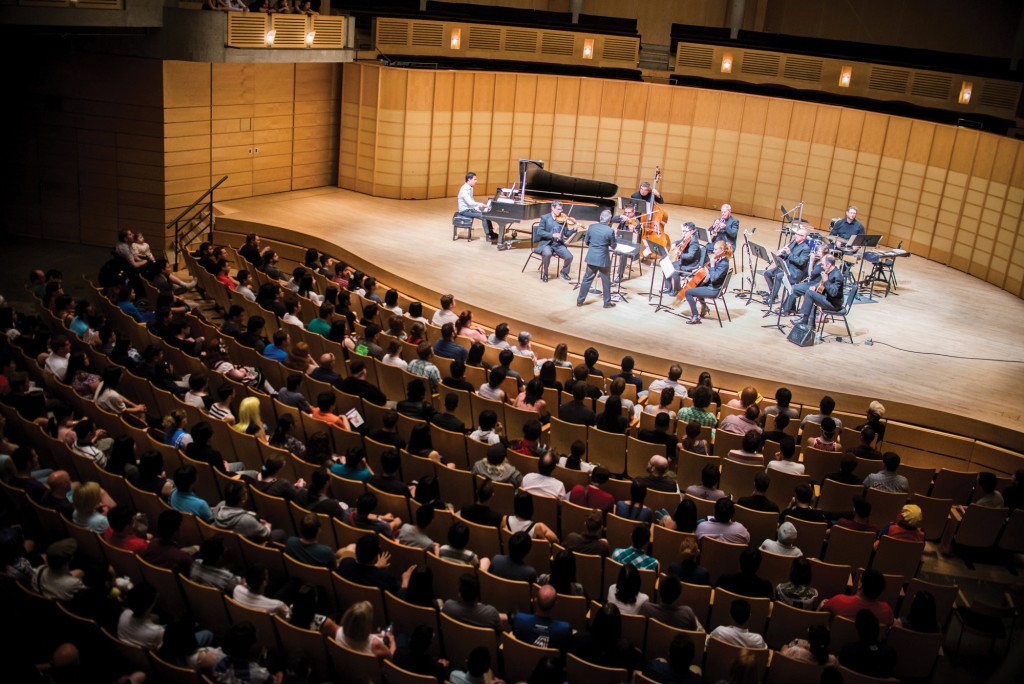 You enter the Theater of Folly. Gatekeepers guard the portal. But you carry a tribute. You present it to the guards. They let you pass, lead you to your throne. Now the real mission begins. You’re here to see a chamber music concert called “A New World: Intimate Music from Final Fantasy.”

Orchestras performing scores from well-known video games like the Final Fantasy series have been blowing through town about once a year of late, drawing sellout crowds and expanding the audience for chamber music in KC.

“The audiences are some of the most appreciative and attentive audiences around,” says Mark Lowry, a local percussionist who often works with the national production companies that organize performances like “A New World,” helping them contract with local musicians. “They are totally into the games, and music is such an elemental part of that. They know every tune, know which characters are represented by every tune—it’s almost like playing for a very knowledgeable opera audience.”

Not “A New World,” which arrives in KC at the Folly on January 17. (Coincidentally, “A New World” isn’t the only concert with video game affiliations happening in town this particular weekend. Lyric Opera of Kansas City commissioned a work from the versatile composer Laura Karpman, who scored the games Everquest II and Untold Legends: Dark Kingdom, for its Explorations Series production “…When There Are Nine” on January 18, which honors women’s suffrage and the ratification of the 19th Amendment.) In this show, the music itself is the primary focus. The album takes beloved themes from different games and presents them via an 11-piece ensemble with arrangements that range from symphonic to rock-driven to lounge-y jazz, mixing in duos, trios, and piano solos. Performing the music live requires a combination of classical skills—elegant sound, ear for balance, long and flexible phrasing—and “a sense of drive and rhythmic edge,” Lowry says. “It keeps you on your toes to know just what each phrase needs most.”

The original “A New World” concert came to Overland Park’s Naka-kon in 2016 and was performed by members of the Kansas City Symphony. For this performance, as last time, Eric Roth conducts the group, which includes ten local musicians and pianist Benyamin Nuss. (Roth is part of the father-son powerhouse AWR Music, spearheaded by Grammy Award winner Arnie Roth. AWR arranges, produces, records, and conducts these shows; Eric was last in town in August conducting the 40-piece orchestra for “Weird Al” Yankovich’s “Strings Attached” concert at Starlight Theatre.) Nuss, who’s just 30, has made a name for himself at the international level through his associations with video game music; he’s done solo albums featuring the work of Final Fantasy composers Nobuo Uematsu and Masashi Hamauzu.

For many, these game music concerts are their first symphonic experiences. But to think of the genre as a sort of stepping stone to more serious repertoire (as is often the case with “popular” versus “classical” marketing) is a disservice to the value game music has for folks. Neither does the genre require academic attention to legitimize it, even though the field of ludomusicology is steadily gaining traction in scholarship. This is music that millions of people experience in their daily lives—unlike, say, a Hadyn symphony or Schubert art song. These works inspire people, enliven them. The music takes them to a new world.