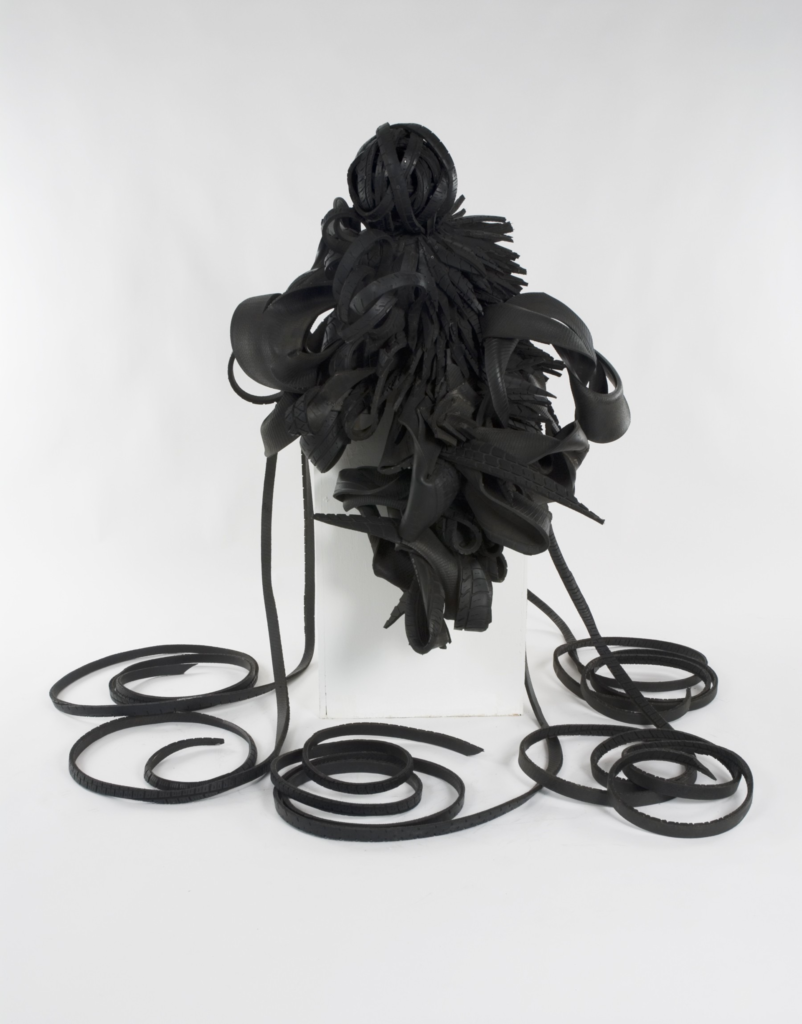 Chakaia Booker‘s exhibition at the Kemper stinks. But in a good way. You know how some people like the acrid smell of tires, fresh tar or bus exhaust? That kind of bitter smell can seem oddly pleasing. It reminds me of going into tire stores with my father when I was little. Not that shopping for tires was a lot of fun or the moment was especially significant, but it all seemed exotic and weird and slightly dangerous. Which brings us back to Booker’s sculptures made from discarded rubber tires. They look and smell dangerous, a bit toxic.

Booker works in New York City and Allentown, Pennsylvania. She uses tires to explore her relationships to labor, decoration, masculinity, blackness, the body, African adornment and environmental responsibility. That’s a lot for a used tire to embody, but Booker has suggested in her discussions over the years that it’s all there in those discarded and repurposed tires.

Booker salvages tires from streets, gas stations, auto body shops and recycling centers. Some retain varying degrees of tread wear, evoking their history of use and commerce. And though formally her work might relate to any number of historical sculptors, Booker claims that her influences are mainly African-American collage artists and painters Romare Bearden and Jacob Lawrence.

Her work is most successful when it appears the most refined, because delicacy and old tires seem nonsensical. In 2005’s “Mixed Message,” beautiful curlicues of rubber dangle from the tightly knotted corpus of the sculpture. The wall piece “The Fatality of Hope,” from 2007, shares that combination of delicacy with the rough-and-tumble nature of the tires.

Some of the pieces are particularly charged, resembling sexualized body parts: 2006’s “Never Mind,” with its exposed vaginal center, refers to the kind of metaphorical open-flower imagery of 1970s feminist artists such as Judy Chicago. The somewhat sarcastic subtlety of those early works is trumped by Booker’s aggressive display of ripped, shredded, twisted and bent tire parts. Her sculptures are not soft and pliable places that invite discovery.

Some sculptures look like the elaborate headdress that Booker wears. Others, such as the small pieces in the 2003 installation “Recess,” resemble balls of fiber. No matter what their appearance, all of the work shares the same intensity born of color, texture, grit and the conceptual possibilities of used rubber.