Cellist Eman Chalshotori is eager to spread the love 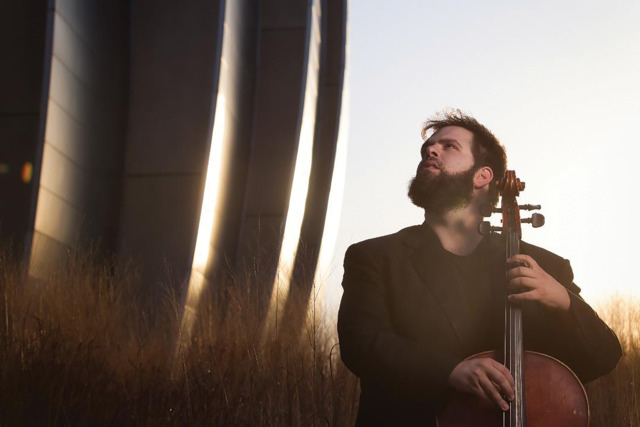 When Eman Chalshotori was in fourth grade, his teacher would punish kids in detention by playing the radio’s classical station. The students would complain and beg the teacher to change the station. One day, Chalshotori decided he would try a different tack.

Little did he know.

Last year, this first-call KC cellist graduated with a master’s degree in cello performance from the University of Missouri-Conservatory of Music and Dance.

He can be found all over the region: principal cellist with the Topeka Symphony Orchestra; assistant principal for the Symphony of Northwest Arkansas; soloist with Topeka Symphony, UMKC Conservatory Orchestra, and Medical Arts Symphony; and member of Midwest Chamber Ensemble and Vivant.

It seems inevitable that the list will only get longer over the coming years, but it wasn’t always such a sure bet. Classical music wasn’t a part of Chalshotori’s life growing up in Oklahoma City. In middle school, he started on violin but switched to cello primarily because he wouldn’t have to share with anyone else (the public school didn’t have enough violins for everyone). When he was in ninth grade, though, he went to see a random Oklahoma City Philharmonic concert on a voucher program they ran for public schools. It was his first professional orchestra concert. He didn’t know what to expect. The ticket misidentified the soloist, Lynn Harrell, as a pianist, so it was a shock to hear the world-class cellist perform Anton Dvorak’s Cello Concerto.

“I know that I didn’t sit for the rest of the concert,” Chalshotori recalls. “I went backstage with my then-date”—

He corrects himself: “I dragged her backstage because I just wanted to be close and see it.”

The ensemble followed the concerto with Dvorak’s New World Symphony. Chalshotori shakes his head, a little chagrined to admit such a cliché lightning bolt moment.

“For me, if it wasn’t on the radio, or it wasn’t on my dad’s mix tapes of Iranian music, we just didn’t go out and do stuff like that,” he says. “So it was really my first experience with something completely different.”

Chalshotori finds ways to share these transformational experiences during his performances, through anecdotes and personal history, along with any apropos theoretical or biographical information about the piece. In his recent performance for InterUrban ArtHouse’s Listening Room, he brought together a group of friends to play music he has loved since high school. In future recitals, he plans to present favored workhorses together with fresh pieces.

“We create enough space to open ourselves up enough to allow something new to come in,” he says.

That’s something Chalshotori shares with his students at the UMKC Academy and Musical Bridges, too. “Even if they don’t end up going into music,” he says, they can “still enjoy their instrument and find an appreciation for the work that goes into it.”

This month, you can hear Chalshotori live with pianist Charles Dickinson for the release of Midwest Chamber Ensemble’s third and latest album, “Vieux Amis-Nouveaux Costumes (Old Friends in New Clothes),” featuring the work of composer Philip Lasser. In September, he opens the 2019-2020 Ruel Joyce recital series with a “good ol’ classical shmassical” recital, and then in January, he performs all of Ludwig Beethoven’s cello sonatas with Dickinson for Midwest Chamber Ensemble.

“The whole process of learning about [all this music] has been so incredible,” Chalshotori says, “and I just love being able to impart that to other people.”