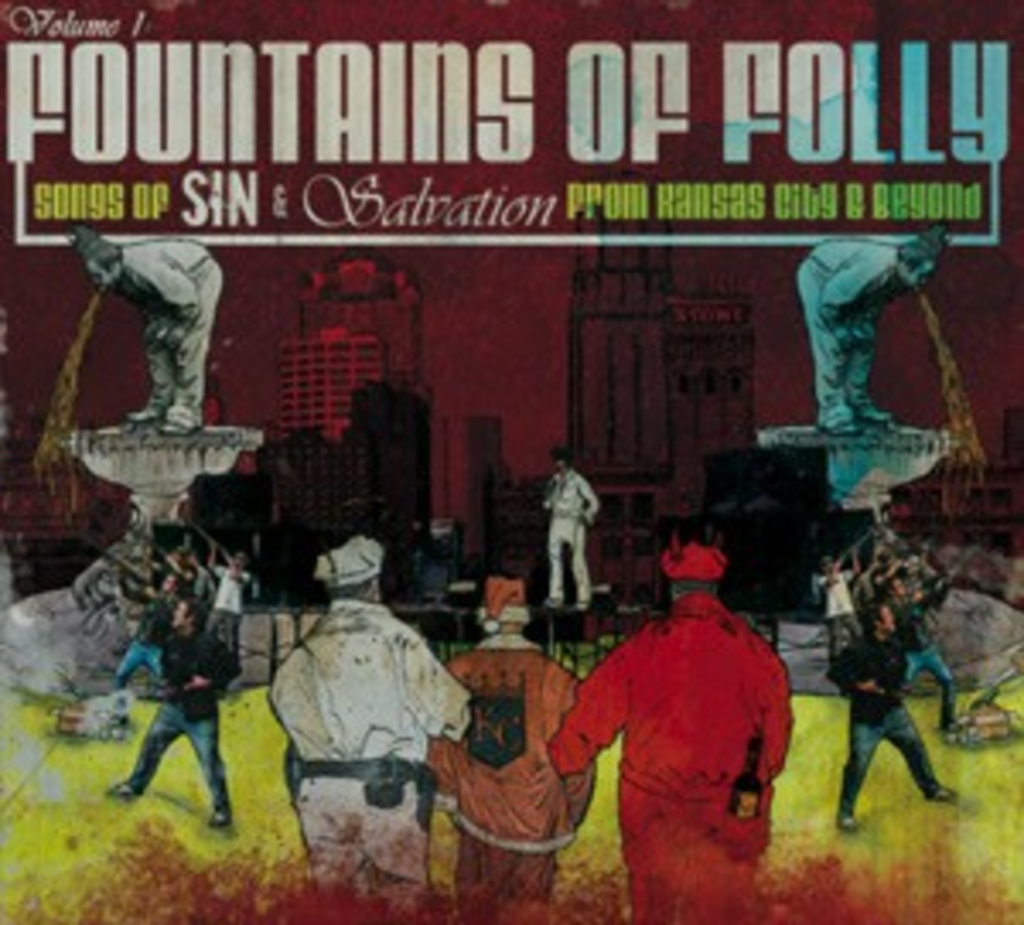 What the hell?! A compilation on compact disc?! I thought they’d stopped making these in favor of handing out download cards. Well, I’ll be damned. Wonders never cease, I suppose.

The full title for this compilation is Fountains of Folly Vol. 1: Songs of Sin and Salvation from Kansas City and Beyond. At its heart, it’s mainly a collection of bands from the Kansas City area. The concept seems to be that Recycled Rockstar, the promotions company run by Josh Nelson of Bent Left, assembled this collection to accompany a publication entitled The Insider’s Guide to Midtown Mayhem. Both the CD and compilation were distributed at the FEST last month.

Now, the CD was a pay-for-play deal, but not in the usual “scam a band” fashion. Every band was either invited or selected from a pool of applicants. You can guess that Bent Left was a gimme. Fists Up!,Them Damned Young Livers, Hopeless Destroyers, and other similar bands — the KC rock ‘n’ roll punks, essentially — all seem to be the invitees. It’s somewhat surprising to see a band like the Brokedowns on here, as they’re not local, and they’ve released an album on Thick, as well as a recent split with the Copyrights. There are a couple other bands on here that seem to bust the local mold, as well, which makes me wonder how this works as a “Kansas City band” promotional tool.

The music itself is worthwhile, however. If you ignore the five bands from outside the area, you’re still left with a great snapshot of what’s going in Kansas City right now. Basically, Fountains of Folly focuses on bands who are young, and play either poppy punk, or some variation on the theme. There’s the more garage-y angle taken by the Rich Boys and the Sixteens, the crusty take offered by Bombs Over Broadway, or even the country twang of Sons of Great Dane, but everything seems to fit together surprisingly well.

Would I enjoy the CD if the tracks were a little more exclusive, and less likely to be found on the artists’ current release? Yes. Would I be a little more comfortable if I wasn’t aware that every band paid $125 for their inclusion? Maybe. I understand that this disc had to be funded somehow, but the bands from out of town kind of taint this as a purely Kansas City vehicle. It’s worth grabbing if you find a copy, however. This sort of venture doesn’t come along as often as it once did, and as a snapshot of Kansas City right now, it does a great job.